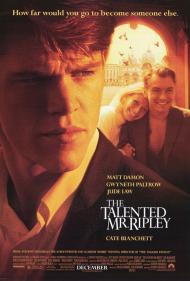 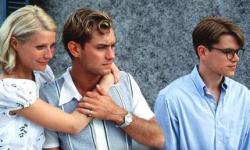 The story of a poor homosexual, Tom Ripley, who goes to Italy and falls in love with Dickie, a straight man that everyone loves. Dickie and Tom become friends of a sort but Dickie soon grows tired of Tom and breaks off the friendship. Tom is so taken with being near Dickie and his ever vacationing lifestyle that he kills Dickie during a confrontation where they each reveal there true feelings for each other.

The murders in this film are the only part that gives reason to ponder. The first one is played almost as an accident. Dickie insults the fragile ego of Tom and he hits him with an oar. I came away from that scene strangely feeling sorry for Tom. His heart was in the right place and until that scene occurred his characters only flaw is that of taking advantage of a good thing. Dickie was the rude antagonist in that scene, and he is filled with selfish flaws. The other murders are to protect Toms identity and cover his trail. So when did he become psychotic? The murder of Dickie? Was he always a nutcase? The movie really doesn't answer that question.

Perhaps we are to believe that these events are a series of stops on the way to psycho city?

The cast of Gwyneth Paltrow, Kate Blanchett, Matt Damon, and Jude Law are great. Jude Law steals every scene he's in. He gives his character of Dickie all the charm and snobbery it needs to make you like him, then despise him. Matt Damon has found his niche. He plays low self esteem characters well, as seen here and in Good Will Hunting 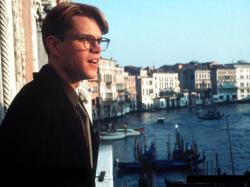 This movie tries very hard to be sophisticated and in some ways succeeds. The cast boasts some of the most talented young actors in Hollywood. The setting is very romantic and beautifully shot. The script is witty and intelligent and the direction is certainly adequate. Taken apart and examined this movie is flawless and yet somehow when seen as a whole it just doesn't work.

It is actually after the scene where Tom kills Dickie that this movie starts to unravel. Up until then it is really gripping, watching this outsider try to fit in in a world he longs to join but can't really be a member of. Once Tom assumes the dead guy's identity and then finds himself in situations where he must kill others in order to keep from being discovered all of the tension and believability escape from this movie like air from a punctured tire.

Nonetheless, this movie will keep you amused and the stars are almost all incredibly easy on the eyes. Just be warned that the first 45 minutes is as good as it gets. 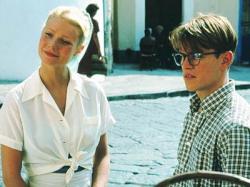 Gwyneth Paltrow and Matt Damon in The Talented Mr. Ripley.

I enjoyed the setting and time period of this movie and that's about all.

Like Eric, I agree that Jude Law steals this movie. Who would ever believe that bland Matt Damon could be the vivacious Jude Law? He is supposed to be 'Talented' apparently, but I see no chameleon like power at work, he gets away with the things he does by sheer luck and nothing else. Still, it's easy to see why Tom would want to become Dickie. His good looks and easy going charm are certainly enviable.

Once Dickie is murdered, I found my interest in this movie quickly waning. I kept hoping someone would catch Tom and put an end to it.