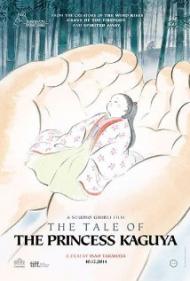 The Tale of The Princess Kaguya

The Tale of Princess Kaguya is the 2014 Best Animated Feature Oscar nominee from Japan, produced by the same company as last year's equally nominated, The Wind Rises. It's a beautifully animated tale based upon the 10th century Japanese folktale, "The Tale of the Bamboo Cutter". It's nomination is well earned for the quality of its animation even if the story it tells is very lightweight and far too leisurely told.

The story begins, as so many fairytales seem to, with a childless couple. In this case it's a bamboo cutter and his wife. One day he finds a miniature princess, small enough to fit in the palm of his hand, inside a bamboo stalk. When he brings her home she transforms into a baby whom they dub "Princess", but who the neighbor children nickname "Lil Bamboo". The child grows into a young girl quite quickly. When the Bamboo Cutter starts finding gold within the bamboo shoots he takes it as a sign from heaven that the gods, who he thinks sent them the child, want him to take the girl into the capital city and raise her as royalty. He uproots his family and the only happiness his daughter has ever known and sets her up in a palace where she becomes renowned throughout the land for her beauty. When 5 important dignitaries show up to woo her, the Princess sets them each an impossible task to complete before she will consider any of their marriage proposals. She hopes that they all will fail because she only wants to marry for love and because, although she almost seems unaware of it, she's in love with the boy she left behind when forced to move to the city.

Perhaps the biggest difference between major studio animated films and those of foreign studios is that the American studios tend to keep their animated images quite literal and realistic. Computer animation keeps getting better and CGI keeps getting used more and more in live action films until it's getting to the point where all films are animated in some way. But foreign studios, or at least the ones who get Oscar nominated, tend to create more stylized animation, with less concern with realism. That's certainly the case here where the images seem straight out of a children's picture book. They look like delicate pencil drawings with the backgrounds painted in water color. There are a couple of surreal scenes where the animation is used to convey the emotions that the Princess is feeling. It's quite beautiful to look at.

Unfortunately, the images are so beautiful that the animators tend to linger a little too long on them. One thing about fairytales is that they're typically short, but this one takes over 2 and a quarter hours to tell what essentially is a fairly simple story. There's plenty of room for tightening, especially because just when the story reaches its climax and the truth of the Princess's origin is revealed, the explanation is told hurriedly and not completely satisfactorily.

As is often the case with foreign animation, there's an English language version voiced by some big name stars, including this year's it girl Chloe Grace Moritz in the lead role. However, having watched the Japanese version with English subtitles, I have to say it suits the story better. Playing "guess the voice" can be distracting and this traditional Japanese story deserves a Japanese voice cast.

Although only one foreign language film has won the Best Animated Feature Oscar (Spirited Away way back in 2002) and it's unlikely that this one will change that trend, it's nice that they are recognized by the Academy. It brings attention to them where they normally would receive very little. It also exposes audiences to a different, more sophisticated animation style while showing that animated films can handle adult themes. Hollywood should take note.