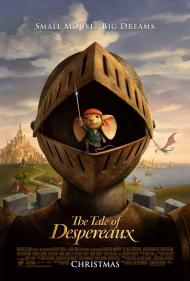 The animation is very well done and Despereaux is adorable.

The Tale of Despereaux proves that a big name cast can't help a mediocre animated feature. Practically every voice in it is recognizable, but apart from a flicker of recognition when you realize who is who, there's really no point in most of them since most of them are just cameo voices. Christopher Lloyd for example, has about 4 lines in one scene. More time spent tightening the script and less in finding famous actors would have been a wiser use of resources.

Matthew Broderick voices Despereaux, a tiny, but brave little mouse, in a kingdom saddened by the death of its Queen. She was frightened by a rat and collapsed into her bowl of soup. The distraught King makes rats and soup illegal. Most places this wouldn't have been such a big deal, but in this kingdom, oddly enough, soup is the national meal and Soup Day is bigger than Christmas. The mere absence of soup from the kingdom makes the skies overcast and rain disappear.

Despereaux is an odd little mouse. He refuses to scurry and cower and instead of eating books, he reads them; dreaming of becoming a knight. He eventually befriends Princess Pea voiced by Emma Watson (Hermione in the Harry Potter movies), who is depressed over the death of her mother. Despereaux's odd behavior eventually causes him to be banished from Mouseworld and sent down to Ratworld, a dark and foreboding place in the dungeon. There he meets Roscuro, voiced by Dustin Hoffman, the rat who frightened the Queen to death. He's living under the cruel thumb of the Rat King; an evil looking rat who resembles Count Orlock from Nosferatu, whose back story is never really developed. Oh, there's also a subplot involving Miggery Sow, voiced by Tracy Ullman, the deaf scullery maid who dreams of being a princess.

The number of characters and the over-involved plot are just two of this movie's problems. In a cartoon it helps to keep the plot, not simple necessarily, but concentrated. There should be a clear cut goal for the hero to accomplish and that goal should be worthwhile. The goal here is to return soup to the kingdom, but there's no simple way to do that, so in the meantime a whole bunch of other stuff happens, not all of which is very interesting or works all that well and it's hard to get emotionally invested in soup.

What does work is the animation. It looks like a children's book sprung off the page. Despereaux is cute, with his big ears and eyes. The backgrounds and details, are all very well done and quite distinctively. Visually there's nothing to complain about, except that I ended up wishing there were more interesting things to be animated.

The moral of this tale is that in the order of importance, the script is the most important thing. Excellent and famous voice-work, coupled with really well-done animation doesn't add up to a good movie without that script to start with.

I agree it is a waste of money paying big bucks to famous actors to voice animated characters. Most of today’s actors aren’t known for their identifiable speaking voices. It rarely registers with me just whose voice I am hearing during these movies. In this case Dustin Hoffman and Sigourney Weaver were the only ones I knew immediately. Many of the others like Kevin Kline, Frank Langella and even Tracy Ullman I was surprised to learn were even in the movie after reading the cast list while writing this review.

If this was the 1940’s I could see the value of using stars like John Wayne, Cary Grant, Humphrey Bogart, James Cagney or Bette Davis, all of whom had such distinct and easily recognizable voices that impressionists did them for years. “Pill-grum.” “Judy, Judy, Judy.” “Shweetheart.” “You dirty rat!” “Petah!” (puff puff). I’ll bet you could hear their voices in your head. Hell, why not use impressionists doing these iconic stars to voice an animated movie today?

I know it’s rather dull of me to echo my brother’s review but in this case I pretty much agree with everything he wrote. The animation is enchanting and the story meanders. To put a positive spin on it - although I knew the ending would be happy - I had no idea from scene to scene what was going to happen next. I guess the writers deserve some credit for that at least. They were able to take the exceedingly familiar fairy tale blueprint and make something original out of it. 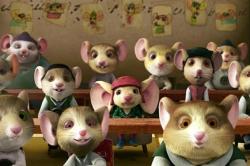 Despereaux being taught what to like and what to fear.

Neither of my brothers mentioned the films moral message.  All of the mice children are taught to fear man and rats.  They are taught to eat books instead of reading them.  Despereaux becomes a renegade of sorts, speaking to humans and not being afraid of where he goes.  Thus the message being that we should not teach our children to be fearful bigots.   I nearly gagged when Weaver narrates, "What would you do if your name was an insult?"

Weaver recites many fairy tale lines with complete sincerity.  "If you know anything about fairy tales, then you know that a hero doesn't appear until the world really needs one."   "Of course, destiny is a funny thing. We go out to meet it and we don't always know that we are."  "In fact, you can have a good heart and not even know it."

There are some laughs to be found here. Despereaux gets into trouble for drawing a picture of a cat in school. The farm girl is thrilled when she gets sold with the pigs. She is the brightest spot in the film.  The jokes, however, are scarce as the film centers on the lesson of not having preconceived ideas.  Tale of Despereaux could have used more fun and less heavy handedness.