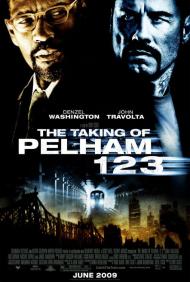 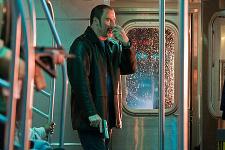 Travolta chews up the scenery in The Taking of Pelham 123.

I used to give Eric a hard time about how when we would watch a movie involving the US Navy, he would nitpick the things the movie got wrong. "Let it go," I would say. After living in New York City for almost nine years now, I'm starting to know how he feels though, as nearly every single movie filmed here gets something wrong. Most of the time I can let this go, but with The Taking of Pelham 123 I have a harder time, because it's a remake of a 1974 movie that truly managed to capture the essence of the city with accuracy.

The general plot of this version and the original are fairly similar. A group of men hijack a subway train and hold the riders hostage, demanding money from the city of New York in exchange for their release. Travolta plays Ryder, the lead hijacker (Robert Shaw played him in the original), while Denzel Washington plays Walter Garber (played by Walter Matthau previously), the MTA dispatcher in charge of the subway train Ryder has hijacked. (The name Pelham 123, by the way, is because the 6 train that Ryder has hijacked originated at Pelham Bay Parkway at 1:23 PM.) Ryder and Garber face off over the radio through most of the movie. The police are called in, but Ryder refuses to talk with anyone else but Garber. Eventually Garber becomes more physically involved as the movie moves to its climax, and it's then that it starts to lose its credibility.

Both Travolta and Washington get to do what they do best and are easily the best part of the movie. Travolta chews up the scenery as the over-the-top villain. He's crazy and you can believe that he will really do what he says he will, even before he starts shooting people. Washington is the everyday, likable guy, but with a past that gives him more depth. The best scenes are those when these two are talking back and forth on the radio.

Once the hijackers get their money and leave the train, the movie seems to lose its way a bit. It's a great setup, but the writers don't seem to know how to end it satisfactorily or believably. Garber acts out of character. He's not a gun-toting hero, he's an ordinary guy who happened to get caught up in a extraordinary day, and he ends up acting out of character.

Although the original version is far from perfect, it's a B-movie with a couple of well-known actors, it does a great job showing New York City in all its dirt and crime-ridden 1970s infamy. The city is practically one of the main characters in that version. Here, the movie is set in the city, but that's all it is, a setting, not a character. James Gandolfini does do a good job as the Mayor of New York though, providing some nice moments of comic relief.

If only they could have thought of a better ending I would have enjoyed this much more. It starts strong, but ultimately doesn't quite satisfy.

As for those nitpicks (spoiler alerts, don't read on if you don't want to know things about the ending), there a few that stand out in my memory.

Another part of the climax involves the 6 train car speeding out of control towards the end of the line at Coney Island. Well, the 6 line doesn't go to Coney Island.

Also, I have a hard time believing that the MTA would keep the trains running when they know there are terrorists in the tunnels. And yet in this movie, apart form the 6 line, all the other trains keep running, including the 4 and 5 trains which share the same tunnel as the 6.

George is smarter than all the other good guys.

Scott, unless you have lived in New York, the subway locations are not an issue.  Complaining about them not being accurate is like asking for proof that Superman can fly.  Get over it, it is just a movie, and not a very good one at that!

This movie has  a plot worthy of a half hour show.  Some hostages are taken, and a ransom is demanded.  To fill time two guys talk.  It is as exciting as it sounds.  Even the writers knew they had a snooze of a plot.  To add excitement they include several police car accidents, as the police race the ransom money across town.   Countless people are killed or injured trying to stop people from being killed or injured.  Gandolfini even points out the plot hole by asking why they just did not helicopter the money over.

I cared not what happened to anyone, except maybe the kid, George, in the subway train with the computer.  He is the only one who is smart enough to make contact with his girlfriend with it.  I did not even care about Garber.  He reveals a past mistake to Ryder, revealing just how human he is.  Thus it did not matter, plot wise, if he lived or died.  If he lives he gets to go home to his wife.  If he dies he redeems himself for his crime.  Either way is no more satisfying than the other.

I think you noticed the mistakes Scott, not just because you lived in New York, but because this movie is full of holes.  Why were the other trains left running?  Why did the police not have cops at every subway exit?  Why, after 9/11, did they even negotiate with Ryder?  Actually they did not even negotiate.  He demanded money and they gave it to him.

As I think about it, the NYPD in this movie are actually as bad as the kidnappers.  They accidentally shoot the former MTA employee.  They cause several deadly car accidents.  They allow a civilian to go into harms way.  What exactly are the police accomplishing by doing everything Ryder wants them to?

Although the New York setting did not bother me, the plot holes did. A thriller is only exciting if it is grounded in reality.  A Superman movie is more realistic than this.