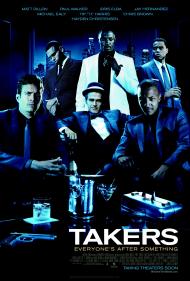 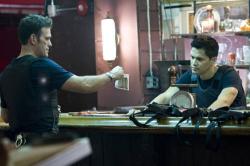 Although Rihanna made her film debut this year with Battleship, her boyfriend Chris Brown beat her to the punch. Pun (no matter how bad) intended.  Brown has acted in several films since Stomp the Yard in 2007.  In Takers he not only stars but also acts as an executive  producer.

With a cast featuring rappers and younger stars, Takers aspires to be Ocean's 11's hipper, younger brother. As with Frank Sinatra's or George Clooney's clans, this group of thieves plot, plan and execute an extremely elaborate robbery. Like it's predecessors, the men dress in designer clothes. They have an affection for suits, with Hayden Christensen sporting a Sinatra-esque fedora.

We get few details on these five guys.  Jake and Jesse are brothers whose father is in prison.  Jesse talks of how he went to a juvenile home.   Jake is in love with a barely seen Zoe Saldana.  Another, Gordon has a sister addicted to crack.  The most distinct trait about Paul Walker and Hayden Christensen is that they are white.   The five are joined by an old "friend" after he gets out of prison, who makes the group a bit uncomfortable.

If the film would have stayed longer on one character I might have been able to invest emotionally into the story.  As it is, none ever become real.  Instead we get slow motion scenes of the guys walking away from an exploding helicopter or a slow mo scene of these guys entering a club.  Get it?  These guys are cool!  Only really cool people walk in slow motion.

We also meet a couple of  policemen investigating the robberies.  Although we learn a few details of their lives, they also remain fairly generic.  I laughed unintentionally when the middle aged Matt Dillon answers his phone and says, "Yo, D-mac what's up?"

The plot has some betrayal and questions of loyalty but since these characters are none to interesting, it mattered not.  The pace is decent and there is some action to be found. The big scene being Chris Brown doing his parkur exercises through Los Angeles while being chased by Dillon and Jay Hernandez.

The film's big problem is of course the robberies themselves.  The coincidences and implausibility of it all is ridiculous.  In the opening robbery scene they getaway by helicopter.  That is, they have one of the bank employees call a news channel and tell them they are being robbed.  They just happen know that the news-copter will, without a doubt, land on the roof so they can helo-jack it.  Is it not stupid to plan an escape route based on the hope and assumption that the reporter's helicopter will be able to be there in minutes, if it decides to come at all?

The big robbery at the end does not go exactly as planned, but I still never found myself caught up in any of it.  No matter how well they dressed or how much scotch they drank these guys are still criminals.  They have people in their lives that they love but endanger many other peoples lives.  I hoped they would all get caught.

Just like the Ocean's movies, the best thing about Takers is the large recognizable cast, which in and of itself does not make a film good.