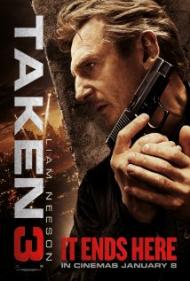 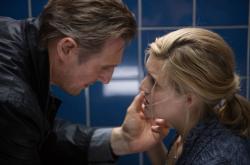 Supposedly this will be the final Taken film. It's hard to take that idea seriously though when in 2012 Liam Neeson stated that there wouldn't be a third Taken film and yet here we are. Reportedly Neeson only agreed to appear if the plot didn't involve anyone actually being "taken". Although the $20 million payday probably helped make up his mind as well. The change in the plot's impetus, along with the location change, which shifts the action from Europe to Los Angeles, does little to alter the franchise formula, which once again finds Neeson's Bryan Mills acting as an unstoppable force going up against the bad guys.

The story opens with some family soap opera within the Mills family. Daughter Kim (Maggie Grace) is pregnant and unsure how to tell her father or her boyfriend. Ex-wife Lenore (Famke Janssen) is unhappy with her second marriage and having fantasies about Bryan. But then things get dangerous when someone close to Bryan is killed, leaving him framed for the murder. He then goes on the lam with the police, lead by Detective Dotzler (Forest Whitaker), in hot pursuit. Bryan must evade them while tracking down the real killers at the same time. Much of the rest of the film is a cat and mouse game between Bryan and Dotzler.

A bigger change in the series than the location and motivation is the drop in the body count. While in the previous films Bryan kills nameless henchmen like he's playing a video game, the number of deaths here seems much lower. Although all three films in the series have been rated PG-13, there's barely anything in this one to warrant the 13, particularly since, despite the lower number of deaths, it still often feels like a video game.

Naturally Bryan himself remains indestructible. He's like a cat with 9 lives in this film, escaping from explosions and car crashes with hardly a scratch. It's normal in an action film like this to know that the hero won't die, but here it never even feels as if Bryan is in danger.

The thing that made the first film such a success, and the filmmakers don't seem to realize with the sequels, is the way that it went so over the top that made it so entertaining. The action was completely implausible, but in a fun way. The writers are too concerned in the sequels with keeping the story planted in the real world. These films aren't about realism and any attempt to make them feel real is wasted. These are films that should be rated R with the sex and violence set to 11. Audiences want to see Bryan mowing down the bad guys in increasingly outlandish situations that we can cheer and laugh at simultaneously. Perhaps the attempts at drama are fueled by Neeson who still wants to be seen as a serious actor.

Although Neeson as Bryan is the star, I think the writers have missed a real opportunity by not developing the supporting characters more. After all the danger she's been in, I would imaging that Bryan's daughter Kim would have taken self-defense classes and learned how to handle a gun. What a surprise it would have been if during the film's climax Kim grabbed a gun and lent a hand. Plus, since Neeson seems to be tiring of the series, they could continue it with her when the inevitable fourth film gets made.

I was far less enamored of this movie than my brother was, but then I didn't much like the first Taken and I have yet to watch Taken 2. As Scott wrote, the filmmakers want to have it both ways. They have this indestructible central character in Bryan Mills, a man capable of accomplishing any feat of daring, and yet the script also tries for real-world human drama that seems at odds with all the cartoon violence. The body count may be lower in this entry but there is one scene on a Los Angeles freeway where innocent civilians have their vehicles crushed by a semi-truck. But then the lives of extras have never carried much emotional weight in action films.

In my review for the original Taken I complained about the sexist treatment of the female characters. Sadly that remains true here. Famke Janssen's one big scene is based on the fact that, although she's remarried to another man, she still has feelings for her ex. And not just romantic/emotional feelings, she sexually fantasizes about him as well. Apparently he's as deadly in the sheets as he is in the streets. She even attempts to kiss him at one point. But the ever noble Bryan rebuffs her advances. She is completely one dimensional and her only purpose in the film is her relationship to the men in her life.

The daughter, meanwhile, is an emotional wreck after learning she's pregnant. When she seeks advice from her father (without actually revealing her situation) she is told she isn't stable enough to care for a puppy, let alone a child. She spends most of the movie behaving like a petulant teenager, tossing half-assed insults at the cops who are trailing her father. They didn't have to turn her into an assassin but like Scott I was hoping for a surprise at the end where she shoots the bad guy and saves her father. Sadly, the writers follow the same old worn out path. And don't tell me I'm spoiling the ending because if there's anyone in the audience who doesn't know how this one comes out then welcome to your first movie.

I will admit that I enjoyed the detective played by Forest Whitaker. In his own way he's as brilliant as Bryan. They are worthy adversaries and would make a formidable team were they to join forces in the next movie (Hollywood isn't about to end this gravy train. I think they'll try to continue it even without Liam Neeson if they have to. Not that I'm encouraging them to, mind you). Detective Franck Dotzler turns the tables on Bryan in a twist on the most famous dialogue from the first Taken. Instead of Bryan threatening the kidnappers and being told, “Good luck.” there's a phone conversation between Bryan and the detective where the detective outlines what Bryan is up against and Bryan tells him, “Good luck.” That's about as clever and original as the script gets.

Liam Neeson is a great movie star. He has immense screen presence and is a damn fine actor too. I just wish he would spend his time making better movies than this bit of hackneyed fluff.

I disagree with Scott's assessment of why the original Taken was such an international block buster success. It was not that it went over the top that made it so entertaining. It was not the implausible, but fun action. Audiences cheered for Bryan to mow down the bad guys because he was after his daughter. We live in a world of narrow minded terrorists, where such things as what happened to Kim is very possible. However, in our world, it would be handled by diplomatic means that would take too long and likely end up with the victim’s death.

In Taken, Bryan did not wait for help from a hot aired politician. He went to town beating and killing anyone who stood in his way or harmed his daughter. What parent was not cheering him on? What child was not hoping their father could do the same if the situation arose? Bryan had some serious motivation for his actions and we did not care who he hurt in getting back his abducted child. We live in a world of kidnappings and killings and we are tired of law makers yacking about more restrictions on law abiding citizens to make them safe. Bryan took matters into his own hands and saved the day with some good old fashion justice. Fuck Yeah!

Compare that to this film and we see where the writers truly went wrong. The first problem is that it is extremely obvious to everyone that Bryan did not kill his wife. Even the cops find the video of her being grabbed and thrown into a van. Even Franck Dotzler acknowledges at one point that he knows what happened in the second film. Hello, Bryan risked his life to save his wife. Why would a super spy do that and then be so stupid as to kill her in his own apartment?

Okay, for sake of following the letter of the law, they need to haul him in to question him. Now we have Bryan fighting cops. Why should I root for that? These are good guys fighting a good guy. The scene where Bryan escapes from the cops while in the patrol car is ridiculous. He causes a major multi car highway accident that in reality would have probably caused some deaths and lots of injuries to innocent people as well as policemen. The movie is careful not to show any bodies or injured people but there would have been plenty.

The stupidest part of the film is when Bryan contacts Kim by poisoning her drink. He leaves a note on her favorite snack to, “Drink this now.” It makes her nauseous during class, forcing her to go to a bathroom where Bryan is waiting with the antidote and a hug. Why did he not just leave a note that says, “Feign illness in class.” He had to make his own daughter sick to arrange a meeting. Gee, thanks Dad.

I agree with Scott that there is little tension in the action as Bryan is indestructible. As Patrick wrote, the real-world human drama is at odds with all the cartoon violence. For me though, the real problem remained a lack of motivation. Sure he wants his name cleared but everyone already knows he is innocent. It has never been said who he originally worked for but I can guess that Bryan knows people who can get him out of any such domestic issue. It was not until Bryan finally went up against the actual bad guys in the movie that I was at all invested in this film but by then I had lost too much interest to make up for everything that had come before. In fact, I have lost interest in this franchise and hope it is put to rest. 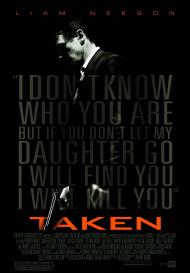 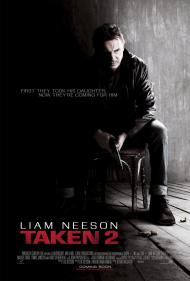