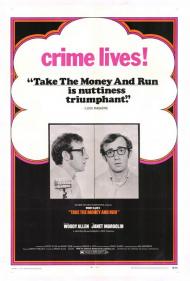 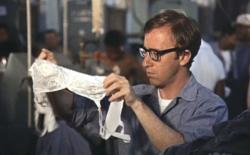 Woody Allen had written, acted and directed in films before Take the Money and Run. This was the first time he did them all on the same movie. The year was 1969 when Allen was 34.

The story of convicted bank robber Virgil Starkwell is told in a quasi-documentary style. Virgil's entire criminal career, from his earliest forays into shoplifting bubblegum machines as a young boy through various jails, prisons and even a chain gang, are shown. Voice-over narration by Jackson Beck gives us the details of Virgil's life in a serious Dragnet voice which adds immensely to the absurdity of the humor. We see Virgil's first meeting with his future wife Louise - “After fifteen minutes I wanted to marry her, and after half an hour I completely gave up the idea of stealing her purse." We are also shown interviews with those who knew Virgil best. His parents wear Groucho Marx disguises.

Like Chaplin's first appearance as the Tramp in Kid Auto Races at Venice Virgil Starkwell represents the onscreen birth of Woody Allen's neurotic New-York-Jew. Only Virgil is more anti-social, more aggressive and less intellectual than most of his later counterparts. Take Jerry Lewis, Peter Sellers and Jimmy Cagney; mix together and stir. In other words a classic character. My favorite moment of his is when he dresses for his first date with Louise. The way he admires himself in the mirror is priceless.

The music by Marvin Hamlisch is good. Isn't that the song from Austin Powers in the scene where Virgil and fellow inmates escape from the chain gang? Woody carries most of the movie on his shoulders but there are a couple of memorable cameos. James Anderson (Bob Ewell from To Kill a Mockingbird) is perfectly cast as the Strother Martin inspired chain gang warden and Louise Lasser has one quick scene as a quirky girl who knew Virgil when he lived in the East Village.

The movie's not perfect. It has some jokes that haven't aged well like the guy in the gorilla suit when Virgil tries to holdup a pet store. And at times it feels more like a series of sketches than a feature length movie. But there are at least two truly inspired jokes. The first is the most famous scene in the movie where the robbery note Virgil gives to a bank teller keeps getting misread. “Does that say gun or gub?" The other one happens when Virgil agrees to take an experimental vaccine in order to be paroled and is temporarily turned into a rabbi. 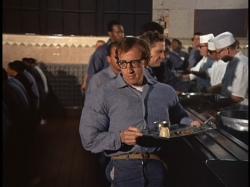 Although Woody had directed before, his only previous experience was on What's Up, Tiger Lily?, an already made Japanese film upon which Allen dubbed new dialogue to turn it into a comedy. His original intention wasn't to direct this one, but instead asked comedy legend Jerry Lewis to do it. Lewis was too busy with his own projects to accept the job and Allen, reportedly to avoid the chaos and loss of control he had witnessed while appearing in Casino Royale, decided to direct it himself. It would be the start of his run as a director which has seen him release at least one movie a year, nearly every year since, only missing out 1970, 1974, 1976, and 1981. Although this film is a little rough around the edges, you can already see many of his future trademarks beginning to form.

Unlike Allen's later films, he shared a writing credit on this one with Mickey Rose, an early writing partner. The two of them had collaborated on What's Up, Tiger Lily?, and would do so again on Allen's next film, Bananas. I don't know if it's because of Rose's participation, but as Patrick wrote, there's a harder edge to Woody's character and the humor is more zany, with elements of silent film comedy mixed in, than there would be in his later work.

The serious documentary style narration does contrast humorously with the actions onscreen, but it's an inconsistent plot device. It's an early example of the mockumentary style of filmmaking, but the reason it doesn't always work is that there's no explanation as to why so much of the action would be filmed for a documentary. Stretches are played out like a standard narrative, but narrated like a documentary. It's such a silly comedy that it hardly matters, but it is noticeable.

As Patrick said, this feels very much like a series of sketches. And, like most sketch films, they are hit or miss in terms of quality. Some scenes are laugh out loud funny, others might elicit a chuckle, while too many just fall flat. The bank robbery scene, with the debate over "gub" vs "gun" is by far the funniest. I also enjoyed the domestic argument between Virgil and his wife on the morning of his big heist. Several scenes are played without dialogue, such as the rock breaking scene on the chain gang where Woody seems to be trying (and failing) to channel Buster Keaton. Allen's best jokes have always been verbal.

Although not to everyone's taste, Allen has produced some true classics in his prodigious output. He's also produced some real clunkers. This one falls somewhere in the middle. There are glimpses of the filmmaker he would become, but he was clearly still learning the craft.