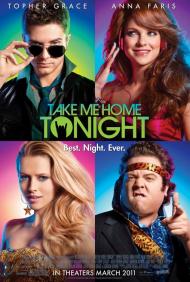 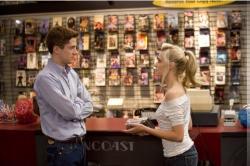 Topher Grace and Teresa Palmer in Take Me Home Tonight.

Although I'm not sure why the makers of this film chose to set it in the 1980s, I'm glad they did, if for no other reason than the kickass soundtrack, which is filled with hits from that decade. However, the fashions on display are an unfortunate, but amusing side effect. I probably would have enjoyed it just as much if it had been set in the present, but the nostalgia is an added bonus for anyone, like me, who grew up during the '80s.

Topher Grace stars as Matt Franklin, a recent MIT graduate, who can't decide what to do with his life. He's moved back in with his parents and is working at a Suncoast Video store at the mall. One of his great regrets in life is that he never asked out Tori, the girl of his dreams in high school.  He gets a second chance when he runs into her again and finds out she'll be attending a party that night. Complicating matters is the fact that Matt has lied to Tori and told her that he works for Goldman Sachs. The rest of the movie takes place over the course of that night, but will Matt get the girl and will he figure out what to do with his life?

Despite being obviously too old for the part, Grace does a good job as the awkwardly, charming Matt. There have been a lot of movies along similar lines to this one, but mainly because of Grace, we still care to see this one all the way through until dawn.

The supporting cast is also quite good. An underused (and also obviously too old) Anna Faris plays Matt's twin sister Wendy. She's also going through a life changing night as she tries to decide whether or not to move in with her boyfriend and settle down or go to graduate school. Dan Fogler (Balls of Fury) plays Matt and Wendy's friend, Barry. Fogler provides the broadest humor and is like a younger and lesser Jack Black. And lastly, Teresa Palmer, who brought much needed life to the recent I am Number Four, plays Tori, Matt's dream girl. It's a fairly thankless part, but she has the looks and charm to at least make you see why Matt has obsessed about her for all these years.

Although the movie is occasionally quite funny, some of the better moments are actually the most serious and heartfelt. Matt is unable or unwilling to decide what to do with his life because of the expectations people have for him. There's a nice and funny moment of symbolism at the end of the movie involving him and a giant metal ball. He also shares a moment with his dad, who is frustrated at Matt's inability to at least try at something.

The other thing this movie has in common with the comedies of the '80, besides the music and the fashion, is that it has a lot of heart. There's none of the snarky, self-referential humor that has become common place since the 1990s. There's an innocent earnestness about Matt's desire for Tori that is quite sweet. It's not a spoof or a satire of '80s movies, it just happens to be set in the '80s.

For some reason this movie has been sitting on the shelf since 2007. It's also mainly been panned by critics, currently sitting at 33% on Rotten Tomatoes. I found plenty to enjoy in it and I imagine others will too, even if it's not until the DVD release that it becomes appreciated. 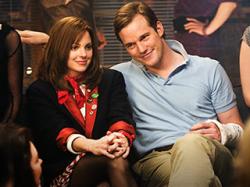 Anna Faris and Chris Pratt in Take Me Home Tonight

Scott, you imagined wrong.  Take Me Home Tonight is dull as sand.  I rarely laughed and was more annoyed than enthralled with these whiny young adults.  I saw it through till dawn but only because I wanted to be able to give it a fair review.  Believe me.  I wanted to turn it off many times.

Matt does not know what he wants to do with his life.  He obviously enjoys working at Suncoast Video or he would have finished his education and got another job.  It is only his insecurity that creates any real issues in the movie.  His speech, "...I have been so afraid of my life, that I have missed my life. But I'm like all of you. We're all scared. We're all trying to be something that we're not."  Is a bunch of crap.  Matt comes from a nice middle class home.  He was a brain in high school and went to MIT.  He gets to have sex with his high school crush.  He gets away with being an accessory to stealing a car.  Why the hell am I supposed to feel any sympathy for this whiny punk?  He has the world at his feet but he is too much of a pussy to seize it.

Topher Grace shows zero range.  He is merely playing Eric from That 70's Show.  It truly could be a sequel to it.  Although he is credited as coming up with the story, he did not write himself a very interesting character.  Anna Faris has been great in many movies but has little to do here as Matt's twin Wendy.

Chris Pratt, Anna Faris's husband since 2009, played my favorite character.  His Kyle is on the outside a stereotypical frat boy, yet is in love with Wendy.  She gets mad at him for showing his excitement when he finds out she will not be leaving him to go to college in England.  She wanted him to want her to go.  Which, if you think about it, makes no sense.  Who loves someone and then says they are excited to be away from them for a long time?  I felt more sympathy for him than Matt.  Kyle tells the same story over and over again.  He works too hard at being popular, as if that is all he has.

The best thing I can say about the generic Take Me Home Tonight is that, since I went to school in the 80s, I too enjoyed recognizing the songs on the soundtrack.  The only other thing that kept my interest was noting how Teresa Palmer looks like Kristen Stewart, only hotter.