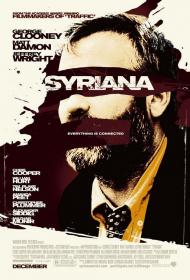 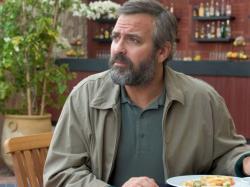 Syriana is sure to make the top ten list of at least one person in the world. Unfortunately, that one person is Osama Bin Laden. I'm sure he, and those who sympathize with him, will delight in how America is portrayed as the essence of evil and the cause of all that is wrong with the world. Over the entire film, with a cast of dozens, only one person is shone as noble and good and it's a safe bet that he's not an American. Even the suicide bombers are portrayed as simply misguided youths forced into their situation by the unfeeling policies of American Oil companies.

The plot, which follows many strands, revolves around the merger of two American Oil Companies. The smaller of the two companies has been awarded a large oil contract in the Middle East and the larger company wants to take advantage of that contract by buying the smaller and thus acquiring it. Naturally the contract wasn't won by honest means, it was only gained through bribery and bullying by the Americans.

One of the plotlines involves a CIA agent (Clooney, looking remarkably like Richard Hatch from the first season of Survivor) who is sent to arrange the assassination of an Arab Emir who wants to bring democracy to his country. When it all goes wrong, his superiors immediately hang him out to dry and let him take the fall.

Another part of the story involves Matt Damon as an Energy Analyst whose son is killed accidentally at a party held by an oil rich Arab. He doesn't let a little thing like his host's negligence get in the way of his taking a lucrative job with him however.

Jeffrey Wright portrays a lawyer assigned to investigate the Oil Company merger, but whose real job is to find out what is illegal about it and then either cover it up or make a deal with the Justice Department that will allow the wrongdoings to be overlooked.

The multi-layered plot is courtesy of writer Stephen Gaghan, the screenwriter of Traffic. This time Gaghan also directs, only with much less skill than Traffic's director; Steven Soderbergh. He's never able to weave the multi-storied arc together in a satisfying manner. Almost any one of the single stories, more fully fleshed out, would have made a better movie on their own than this combination of stories does.

And call me old fashioned but I also prefer my movies to have a protagonist that I can root for. Would it have killed Gaghan to include one American character with some redeeming qualities? Even if he wanted to attack the Oil Industry, couldn't he have thrown in an investigative reporter or someone who was out to get to the truth of the story? Clooney's character is the closest thing the movie has, but he only finds a conscience after the CIA turns on him.

If while watching this movie, you started to suspect that Stephen Gaghan is just a pseudonym of Michael Moore's, you would be forgiven. There hasn't been a movie this anti-America (note that I'm not saying it's unamerican, since Gaghan is as entitled to his opinions as anyone), since Fahrenheit 9/11. 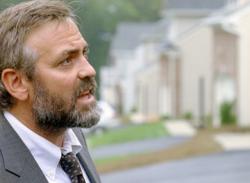 Not only is this film anti-America, but it is filled with liberal Hollywood stereotypes. Chris Cooper plays a big oil capitalist Texan who likes to hunt, much like Alec Baldwin's capitalist hunting Texan in Fun with Dick and Jane. Just as in Inside Man, Christopher Plummer plays another rich white man who causes lots of trouble. Even his character's name, Whiting, says it all.

Why did Clooney win an Oscar for this role? He does a decent job but nothing amazing. I think he just rode the liberal wave of this anti-Bush film. It also helped that he showed off his overweight torso, which is considered brave in Hollywood terms, and is an almost guaranteed Oscar nom.

This anti-America message does not surprise me. Liberal movie makers think they are making some brilliant statements by making rich Americans look evil in movies. They just make themselves look like hypocrites. Hollywood is filled with rich white American capitalist who constantly make movies about rich white American capitalist being the constant source of all evil in the world. Are they trying to deflect blame or take some? 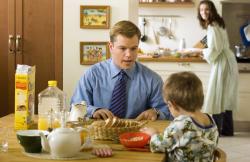 Since neither of my brothers seems to be able to get beyond the "anti-American" view point of this movie, allow me to. The arguments my brothers bring up sound quite a bit like the ones that gay people have been complaining about for years. Too often we are shown in movies as the bad guys without it being balanced with positive portrayals. OK so the rich, white, American capitalists in this movie are corrupt. That does not mean that the makers of this movie are labeling ALL rich, white, American capitalists as evil.

But beyond that Syriana has much going for it. The acting is certainly top notch. The scene where George Clooney's character gets tortured was intense and brutally realistic. The editing and story are also well presented. I disagree with Scott that the direction here is much worse than in Traffic. In my opinion both are quite good.

So what if this movie isn't a happy or uplifting one, or there isn't a clear cut protagonist to root for. It is still a thought provoking and compelling movie that doesn't pull any punches. The bottom line is that in any country and any business there is and always will be an element of corruption. This is a movie about the corruption in the international oil business. Period.