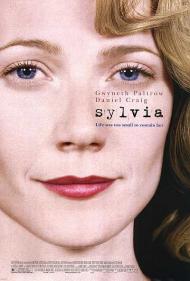 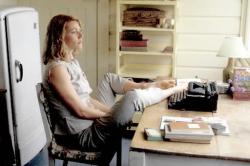 Sylvia is a well crafted telling of the life and career of poet Sylvia Plath, centering on the volatile relationship with her husband, fellow poet Ted Hughes. It features beautiful imagery, a great performance by its lead (Gwyneth Paltrow), and clearly demonstrates that the border between genius and madness is paper-thin. It is also, as you might expect given its subject matter, depressing as hell.

The movie begins when Sylvia meets Ted (Daniel Craig, whom you might remember from the first Tombraider movie) while she is studying in England. There is an instant intellectual and physical attraction. They marry and move to America where Ted's reputation and career as a poet take off, while Sylvia's writing flounders.

Their first years together seem happy enough, but it doesn't take long for Sylvia to begin suspecting Ted of having affairs. We, the audience though, are not shown whether her suspicions are well founded, or simply the product of her paranoia, until much later.

The movie does reveal early on that Sylvia attempted suicide when she was quite young, following the death of her father when she was nine years old. Gwyneth details this story with great emotion and feeling, perhaps augmented by the recent death of her own father, who reportedly urged her to take this part. The seeds of her instability are there, buried as the movie begins, but growing as it progresses.

In an attempt to re-ignite their relationship, the couple returns to England and starts a family. For a short period, happiness reigns again and Sylvia even manages to get a book of her poems published. She also, during this period, gives birth to a boy and a girl.

When Ted begins another affair, and this time there is no doubt of it, the old problems return and Sylvia's delicate mental stability is rocked once more. This time Ted leaves Sylvia for the other woman he is seeing, and Sylvia, deep in the darkest period of her life, begins to pour out her pain into her work. As she puts it, 'It is as though God is speaking through me.' It was during this time that she wrote her best-known poems; those that would be published posthumously in her book Ariel.

The working title for this movie was Ted & Sylvia, but it is easy to see why they shortened it. For although the movie begins with their meeting and ends just after their final attempt at a reconciliation (which failed and helped prompt Sylvia's suicide), Sylvia is the centerpiece of the story. We learn nothing of Ted's background or his motives. His affairs are his only character note. The fact that the woman he left Sylvia for, also committed suicide (a fact not mentioned in the movie), has to show that he was not an easy man to live with, but that really isn't shown, beyond his tendency to conduct extra-marital affairs.

They say pain is the mother of art, and never was that more clearly demonstrated than in the life of Sylvia Plath. So great was her pain, that it is difficult to enjoy watching this movie, but she remains a fascinating character throughout its length. 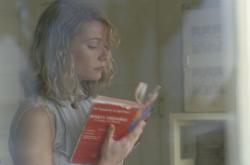 Sylvia or as I like to call it Martyr without a Cause is, as Scott wrote, 'depressing as hell'. Sure it celebrates the poet's genius but her art is never allowed to let us forget just how disturbed and unhappy she was. Who knows, if she had lived today we might never have been gifted with her brilliance thanks to modern medication. Clearly she had a chemical imbalance. Can anyone say Prozac?

Now about Gwyneth Paltrow. I suppose she is a competent enough actress, but she bores me to distraction. She is just so damn willowy and waspish that for me she comes across as cold and goddess like. That said I do think she was perfectly suited for this part. Legend has it that when she was making Mrs. Parker and the Vicious Circle early in her career Gwyneth was told by Jennifer Jason Leigh (who was playing the title character, poet Dorothy Parker) that she resembled Sylvia Plath and suggested she play her one day. Another costar in that movie, Jennifer Beals, gave her one of Sylvia's poetry books.

Scott mentioned Gwyneth's father but failed to note that her mother, the wonderful Blythe Danner, plays Sylvia's mother in the movie. For my money she has far more charisma and screen presence than her overrated daughter.

Though not a movie I will watch again Sylvia should please fans of both the lead actress and the poet. 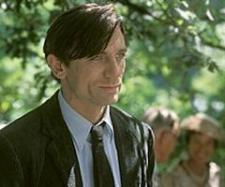 Yes, Sylvia is depressing as hell. It is also boring, as it is without a single likable character. Who am I supposed to care or root for, the nut or the philanderer? Sure it would have been nice if she all-of-sudden became sane, but life does not work that way. Much like Russell Crowe in A Beautiful Mind, Paltrow creates empathy for a mentally unstable person but, not sympathy. I felt sorry for her frustrations at writers block and marital insecurity, but I could not relate to her insanity.

Scott, I do not remember Craig from Tombraider, but I get the feeling I have seen him in some other role. Interesting that five years after this movie was released Craig is an international superstar, while Paltrow is practically a has been. I am not sure why she bothers you Patrick, but I have always found her to be a competent actress. She does a respectable job here, but I do not think anyone, including Crowe, can bring a crazy character to life. They exist with their own peculiar view of the world. A private world that no one else can ever fully comprehend, no matter how talented the actor. If we could relate to them, they would not be insane.