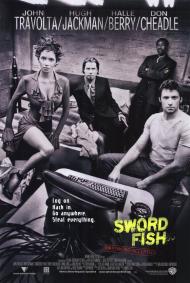 Swordfish is one of those movies that start interesting, but then kind of meanders off in ways that don't quite live up to it's promising beginning. From an amazing opening scene where you are placed three quarters of the way into the plot with a robbery at a bank and an explosion filmed in The Matrix style, but with a twist, you are then moved four days previous to where it all began and then led through what is a simple plot made needlessly complicated, until finally you reach the implausible ending. Only none of the movie is ever quite as engaging as those first five minutes.

The plot, which as I said is quite simple but made complicated, is this. Stanley Jobson (Hugh Jackman) is a convicted computer hacker, now working on an oil rig in Texas, and forbidden by law to ever touch a computer again. He is hired by Gabriel Shear (John Travolta) to create a computer virus that will allow him to steal $9 ½ billion. That is the entire gist of the plot. Oh sure, there's more than that. Jobson agrees to do the job because he needs the money to get custody of his daughter from her porn star mother. Halle Barry plays a sexy hanger-on of Gabriel's, who may or may not be whom she seems. Don Cheadle plays the computer crimes detective tracking the situation. And there is a silly attempt to make the movie deep and thought provoking by providing a political background to the whole thing, but the actual main plot is a simple robbery, despite all the smoke and mirrors.

Luckily this movie was blessed with a likable cast who at least keep your attention even if you're not exactly enthralled. Jackman is moving quickly towards the A-List of Hollywood stars, and deservedly so. He's got the looks, the build, and he can actually act, although this movie isn't Academy Award material, he does get to present some emotion and he presents it well. Travolta is…Well, Travolta is who he always is, John Travolta. He plays Gabriel, the Euro-Trash wannabe, as he plays every character, as himself. And somehow he never comes across as threatening in this movie. He's too soft, kind of like the Pillsbury Dough Boy of villains. Halle Berry is in this movie for one reason only, Eye Candy. Which is a good thing, because I don't think she could handle anything else. Maybe she can act well, but if she can, it hasn't been in anything I've seen. Perhaps that's why she agreed to flash her tits in one scene. So people would talk about that instead of her acting. Don Cheadle could almost be playing the same character he played in Traffic, only moved from the Drug Squad over to the Computer crimes division. Luckily for the audience, it is a character he plays very well.

Of the plot holes, I will only point out a few since revealing plot holes also reveals the plot, and I don't want to spoil it for you, just in case you do go to see this movie. The first, while not a plot hole as such, is Jackman's character as the computer hacker. I find it hard to believe that the greatest computer hacker in the world would also have Super Model good looks and an athlete's body. Quibbling, I know, but it's still a plot point that bothered me. Secondly, if they are hacking into the bank to steal the money, why do they have to go to the actual bank to rob it? If you're using the computer that controls the money, is that still hacking? There are other points, but to point to more would only reveal more of the plot. Suffice to say, they are there.

So, while not a horrible movie, I wasn't really bored throughout, this is by no means a great, or even a really very good movie. If you're a fan of both Jackman and Travolta, you won't be too disappointed. They both give what they're best at. And the plot, until it begins to unravel, appears interesting. All in all, a lukewarm thriller. 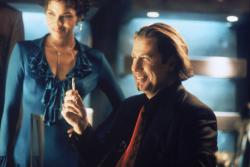 The beginning of the movie as Scott mentioned is rather intriguing. It gives Travolta his best moments and makes one wonder if this is all of the script he read when deciding to make the movie. It is very Tarantino-ish and is completely unlike the rest of the movie with it's bevy of scantily clad women in countless nightclub scenes and it's over the top cartoony violence.

That said, I must also point out that I too enjoyed the movie simply because it moves fast and is easy on the eyes. Although I agree that Halle Barry is completely exploited here, I must point out that she can act. Watch Jungle Fever where she plays a crack head or Boomerang where she holds her own with Eddie Murphy if you don't believe me. 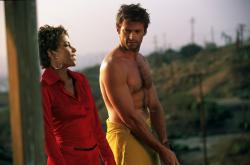 The first debate to settle here is the can Halle Berry act question. Yes she can. However, she to often plays such light weight roles, like in The Flintstones, X-men, and Swordfish, that you rarely notice.

Now that I have weighed in on that, I will give my opinion on Swordfish. Scott detailed the plot well enough so I will discuss another angle of the film that I found quite interesting. The vastly contemporary subject of terrorism.

When this film came out, September 11th had yet to occur. Travolta here plays a bad guy. He wants to steal billions to use in a secret politically sponsored anti-terrorist war. Jump to after 9/11 and now he seems almost like a hero. Okay, an incredibly misguided sadistic hero, but a hero non the less. He just wants to kill the bad guys. In one scene Travolta tells Jackman that he can buy a nuclear bomb in Minsk for 40 million dollars. Recently in the news it has been reported that Russia cannot account for all of its Cold War nuclear warheads, and implications are that they may have been sold.

So where as I agree very much with Patrick's and Scott's review, Hugh Jackman a computer hacker?, The movie has a new level due to current events. Before 9/11 Travolta's character was a Hollywood villain. After 9/11 he is a far more realistic and scarier character.