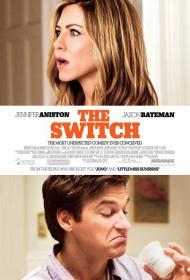 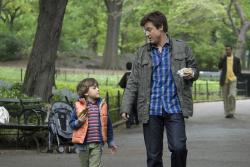 Thomas Robinson and Jason Bateman in The Switch.

Jennifer Aniston has yet to become a movie star.  She's famous of course, but not for any of her movies.  I don't think it's because she isn't talented or beautiful, but rather because she always seems to pick poor parts for herself.  In The Switch, for example, she takes on a very generic part that nearly anyone could have played.  Although she's listed first and has received the most publicity, this is Jason Bateman's movie and Aniston is merely supporting him.

Bateman plays Wally, a cliched neurotic New Yorker, who is best friends with Aniston's Kassie. Kassie decides to become pregnant by artificial insemination and holds an Insemination Party to celebrate.  At the party, Wally combines alcohol and a herbal pill, which leads him to replace the donated semen with his own, but because he's so stoned out of his mind, doesn't remember doing it the next day.

Fast forward 7 years and Kassie, who moved back to Minnesota to raise her baby, has returned to New York.  After meeting her son Sebastian, Wally begins to suspect that he might be the father and he begins to remember the events of that night.  Kassie, in the meantime, has begun a relationship with Roland, the man she thinks is the sperm donor.  Will Wally, who has begun to have stronger feelings for Kassie, profess his love in time?

Conservative political commentator Bill O'Reilly recently took exception to some remarks Aniston made while publicizing this movie.  She said, "Women are realizing it more and more, knowing that they don't have to settle with a man just to have that child."  To which O'Reilly replied, "She's throwing a message out to 12-year-olds and 13-year-olds that, 'Hey you don't need a guy. You don't need a dad.' That is destructive to our society."

The irony of their exchange is that the movie is actually very pro-father.  Kassie does have a son on her own, but the movie shows that her son Sebastian craves a father.  He quickly forms a bond with Wally and it's obvious that he needs his male influence.   It is also revealed that Wally himself was without a father for most of his life and is perhaps hinting that is the reason he has so many issues.

To demonstrate this even further, Sebastian collects picture frames.  He doesn't put photos in them, but leaves the original photos that come with the frame in them and he makes up stories about the models in the photos, describing them as his father's family.  Clearly he is crying out to know about his dad and his dad's family, with the empty frames representing the emptiness he feels with his lack of a father.  The ending of the movie is the resolution to his collection.

There are some cute and funny moments here.  Aniston and Bateman are both likable, even if they don't really share any great passionate moments.  It's easier to believe they're friends than it is to believe they could be lovers.  Jeff Goldblum provides a few funny moments as Wally's friend and boss.  Reinforcing the father and son motif is the fact that the best moments are those between Wally and Sebastian.

The biggest problem with the movie though is that the plot is really only sustained because Wally takes so long to tell Kassie the truth.  The entire mix-up could have been taken care of by one grown-up conversation between the two of them.  If you can get past that though, you should be at least mildly entertained.

I suppose Aniston wants to keep working and I'm equally sure that the majority of the scripts she's offered are of the good girl, romantic comedy type like this one.  Surely though she has all the money she'll ever need, so why not take some chances?  Work for scale in some indy film.  Play a hooker, or a villain.  Something against type that will break her out of this vanilla, generic slump her career has fallen into.

Jennifer Aniston and Jason Bateman in The Switch.

Her career has not fallen into generic roles.  She has always played generic roles.  Her entire career has been based on a hot body and a friendly smile.   Even when she has tried other roles, such as Derailed, she is still playing her cliche.  She attracts Clive Owen by being a hot body with a friendly smile, but then he finds out she was just bait.  The fact that she is a producer on this film shows that she is becoming more concerned with how her movies are made.

I connected with Wally and his growing affection for a child he never knew he had.  Their scenes together are the best ones in the entire movie.   Like Scott, I felt they had better chemistry than Bateman and Aniston.  The one and only time Aniston and Bateman seemed to be a real couple was when they were looking at the photo album.  They seem very comfortable together and they are truly sharing a intimate moment.

The Switch felt very much like When Harry Met Sally and Had a Bastard.  A New York friendship turns romantic but neither is brave enough to confess it to the other.  Both have a friend designated as comic relief.  Harry and Sally had Bruno Kirby and Carrie Fisher, while Wally and Kassie have Jeff Goldblum and Juliette Lewis.  Both movies have a scene where the female lead slaps the male lead after he tells her something.

As far as the political "single parent debate goes," O'Reilly makes a point that the more it is represented in movies and television , the more it is encouraged.  However, as Scott pointed out, The Switch ends up being a pro-family film as the child clearly needs a father and family.   Considering how mediocre this movie is, that mild controversy was the films best advertisement.