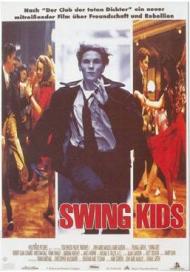 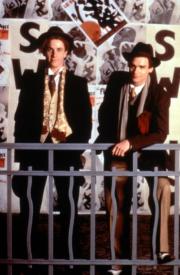 I have always had a fascination with the whole World War II experience and time period.  I also like big band swing music.  Swing Kids is heavy with both subject matters, creating a possible favorite film for me.  However, it never properly comes together.

The story centers around some German teenage boys just before the start of World War II.  They like nothing better than to cut a rug at a local swing club.  They buy every big band record from America they can get their hands on.  The soundtrack features songs by such artists as Count Basie and Benny Goodman.  Since many swing musicians are African American, the music is not considered appropriate by Nazi's.  This theme of being young and enjoying music that others say is wrong, should speak to every generation that has come since.

Although most parents complain about their teenagers choice in music, these boys are expressing their freedom of choice in a time and place where freedom is being squashed.  As they have grown up with Nazism for most of their youth, these teenagers are at first blind to the political issues building up around them.  To them, Nazis are just the meaningless authority figures they enjoy rebelling against.  This is until the boys become Hitler Youths and they start to realize that their world is so much more than just about sneaking off to the club.

The heart of the story is the friendship between swing kids Peter and Thomas.  They both become Hitler Youths and at first seem on the same page.  "How's this for a cover? HJs by day, Swing Kids by night?"  Thomas says at one point.  Before long though, Thomas starts to fit right in with the brown shirts.  Peter, whose father was taken away by the Nazis for speaking out against the treatment fellow Jewish professors, does not. "If you side with the Nazis, Thomas, then we're at war."   Their friendship becomes strained, to say the least.   One of the best scenes involves Thomas and the Hitler Youth busting up the boy's swing club where Peter is dancing at.

Everyone should be able to watch this film and recognize the theme of music and dance as a form of rebellion.   Although some generations are more distinct than others, we have all played our music to the annoyance of our parents.  I did as a teenager, and now as a parent I have had headaches from the noise my sons call music.

The problem is that the director, Thomas Carter, is not able to orchestrate the story.  All the elements are there but little cohesiveness.   Known more as a television director, Carter has directed a few films, including one of Eddie Murphy's bombs, Metro (1997).  Yeah, I do not remember it either.  Perhaps the subject matter was too foreign for Carter?  He did a much better job with his most successful film, Coach Carter (2005).

A big example of what I mean is with the dialog.  I groaned every time Robert Sean Leonard talks to Barbra Hershey and says, "Mama."  The broken English idea, "Mama, I go to University." was horrible.  Carter should have either had the actors speak in complete English or in German, but to break it up as if they were Germans trying to speak English badly, was stupid.  The final scene in which Peter's brother yells, "Swing Heil! Swing Heil, Peter! Swing Heil!" is intended to be dramatic, but ends up laughable.

Under better direction, Swing Kids could have been a much better film.