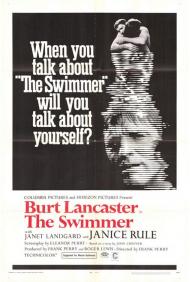 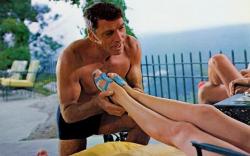 The Swimmer is a perplexingly weird movie. Burt Lancaster stars as Ned Merrill. In the first scene he emerges from some woods clad only in a swimming suit. He drops in unexpectedly on some old friends and then gets the idea of "swimming" home by going from neighbor to neighbor and swimming across their pools. The entire movie is a series of people he meets along the way and the pools he swims across in this upper-class Connecticut suburb.

At first it seems that Ned is experiencing a mid-life crisis. It doesn't take long, however, before it is painfully clear that the man is really having a nervous breakdown.

Piece by piece the life of Ned Merrill is exposed. He comes across the now 20-year-old woman who used to baby-sit his daughters. He also encounters an actress that he had an affair with. Still the details are never made completely clear, even at the movie's conclusion. And what a downer of an ending it is.

What seems almost humorous now is that everywhere Ned stops people offer him drinks, and the movie starts on a Sunday morning. Yes, this was definitely the cocktail generation. The clothing styles and attitudes are very 1968. Joan Rivers, with what I assume was her original face, makes an appearance at one particularly large pool party that Ned crashes.

For some reason this movie reminded me of The Planet of the Apes. Both were released the same year, both feature Kim Hunter, and in both cases the male star (Burt Lancaster and in Apes Charlton Heston) show their naked butts. It must have been the trendy thing to do at the time. Also both movies end with the hero on his knees crying out in despair. The "surprise" ending here is not in the same league as Apes though.

This is one unique, if not completely satisfying, movie experience. 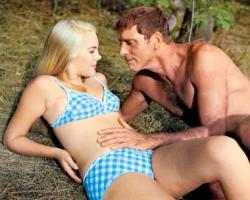 Janet Landgard and Burt Lancaster in The Swimmer.

I agree that this movie isn't entirely satisfying, but I was oddly moved by it. It's both ahead of and very much of its time. In spirit it feels like a modern independent movie far advanced from the mainstream movies of its day. At the same time though, some scenes such as the  montage sequences between swimming pools are very much of the late 1960s, particularly the scenes with the babysitter that are not only embarrassingly dated, but also pad the running time. The result is a flawed, but still affecting story.

The script offers little in the way of concrete explanation. Clearly Ned was a high-flyer in the business world, commuting every day from his mansion in Connecticut to work in New York City. He had a wife, who is described as snobbish and "a former Vassar girl" by people Ned meets that day. He has two daughters whose age Ned has difficulty keeping straight as the day progresses, describing them to some people as mere children while to others as teenagers. Others describe them as snobs who have had trouble with the law. He is known to everyone he meets and was obviously popular, but at the same time you feel a strong sense of resentment from others who you can tell aren't all that sad to see him brought low.

Exactly what happened to him and why he is on the top of a hill in his swimming trunks remains a mystery, but we can guess from the clues we are given. He obviously lost his job and was financially in trouble. His marriage dissolved, which isn't surprising given that he had one mistress for sure and hints of other dalliances. We learn, although how reliably is unclear, that his daughters thought he was a joke. All of these things lead to a mental breakdown. My interpretation is that he was institutionalized and either he escaped or was released just prior to the movie's start. Another, more radical interpretation could be that the entire movie takes place inside his head while he's still in the institution.

Ned's delusions are summed up in the scene where he "swims" across the dry pool with the young boy. "You see, if you make believe hard enough that something is true, then it is true for you," he tells him and clearly that's what Ned has been doing a lot of lately.

Lancaster is in phenomenal shape at 55 years of age. He looks years younger. Only in the over-used extreme close-up does his age show through. In some ways this works against the character. He's in too good of shape to believably be a man who's been through what he's been through. What he does bring to the part is a dignity that carries him through and kept me watching to see what would happen to him.

No, this isn't a completely satisfying movie, but it is an interesting one. 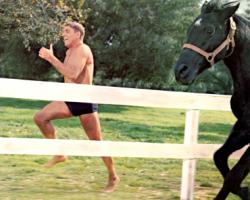 The mystery of Ned Merrill is not exactly perplexing, but the way it is told, is.  Everyone he meets has not seen him in a long time.  He has no idea one neighbor put in a new pool the previous year.  He has clearly not been around for awhile, but no one says why.

At the first pool he talks to a guy about summer camp when they were children.  At the second pool he mentions his daughters and the wife stops her husband from saying something obviously important about them.  The third pool has a woman mad at him about an accident from years before.  Clearly Ned is revisiting his life, or at least relevant moments from it.  When he meets his daughter's babysitter and her fully grown brother, he comments that he last saw him when he was waist high.  Ned has been gone for years, but where?

As Scott wrote, it is clear that he lost his job.  He was involved in some accident.  How exactly those thing affected him is only vaguely explained.  It is clear that he collapsed under some pressure.   His fascination with the pools and running through the fields and hanging out with his daughter's sexy young baby sitter make him seem like a teenage boy.   Ned spends this Sunday afternoon acting as free as it is possible to be.  He has clearly lost it.   His mind has gone to a safe place, but he keeps running into people who bring reality back into focus.

The old nudists provide a brief amount of humor and the babysitter's confession is endearing, but the mystery of what happened to Ned and why he acts the way he does is the real meat of the film.  The ending is not a surprise at all.  We are given solid clues all along about what he will find when he gets home.

We learn through the series of conversations Ned has with his neighbors, that he screwed up his life one step at a time.  This is his literal and figurative journey home.  He comes across those he has hurt and wronged, but he has no means to make amends with any of them.  This journey, whether actual or mental is Ned coming to terms with the problems he has created.  If anything, this swim home will either drive him further insane or start the healing process, but as my brothers already mentioned, the plot is too vague to know which.