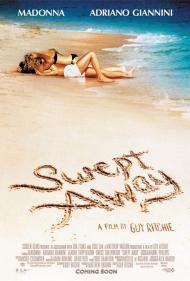 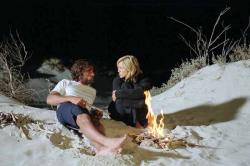 Adriano Giannini and Madonna in Swept Away.

Have you ever heard about a disaster or a tragedy? You watch the news hoping the fire or plane crash is not as bad as you heard. Then you find out it was even worse. This is exactly what happened when I decided to watch Swept Away.

Three rich, and very dull, American couples chart an old yacht to cruise the Mediterranean sea. The bitchiest American on board, Madonna, and an Italian sailor get lost at sea and stranded on a deserted Island. Whereas she was cruel to him on board ship, he in turn is cruel to her once on land. So of course they fall madly in love.

This is easily the worst movie of the year. Stupid dialogue, bad acting and lousy direction make for one painful viewing. In one scene I started to laugh as Madonna's rich bitch character drops to her knees kissing the foot of the sailor who has been smacking her around lately. Then I stopped when I realized they were actually going for drama.

Madonna has been working out a lot. Her shoulders and biceps are very toned. Her face is very gaunt. She looks unhealthy. Thin is good, but some soft feminine curves are much more attractive than the holocaust victim look.

This movie, of course, stereotypes rich people as snobs and bores. The makers of this movie push their liberal views by slamming capitalism. In one scene Madonna's arrogant character spouts the line: "The laws of capitalism are; the proprietor of goods can set any price that he or she sees fit and shall not be at the mercy of any moral or ethical issue." One character immediately gives her a "your crazy" look, while another calls her names.

Madonna and all capitalism hating liberal movie stars are hypocrites. In the movie Madonna is speaking about medicine for the blind. However, capitalism is about more than that. Madonna's entire career and fortune is based on the advantages of our capitalist society. She, the proprietor, created goods and sold them for a price without ever worrying about moral or ethical issues. Madonna and her husband/director Guy Ritchie will get a good lesson in capitalism when they have a hard time getting film work after this fiasco of a movie.

The best thing this DVD has to offer is not the movie itself. Madonna fans will enjoy a 'making of' featurette. It includes an interview Guy Ritchie and Mrs. Ritchie, as he calls his wife, give to each other. There are even clips of their kids. I found this featurette more entertaining than the movie. They should have made a making of the movie, movie. It definitely would have done better.