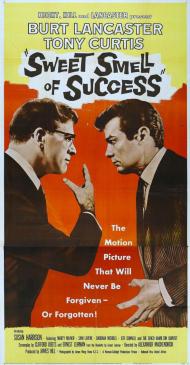 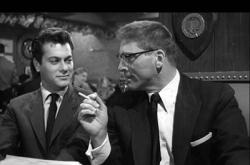 Tony Curtis and Burt Lancaster in Sweet Smell of Success.

Filled with beautiful black and white cinematography of New York City at night during the 1950's, particularly the neon blaze of Times Square, Sweet Smell of Success was groundbreaking in its depiction of completely ruthless characters who will do anything for a buck. Tony Curtis is sleazy press agent Sidney Falco, hired by New York's most powerful newspaper columnist J.J. Hunsecker (based loosely on the great Walter Winchell) played by Burt Lancaster, to keep his sister from marrying a jazz musician.

This unflinchingly bleak vision of the dark side of human nature is brutally honest yet lacks any likable or sympathetic characters. Sidney is so completely corrupt that he pimps his girlfriend to get an item in a column and J.J. is so power hungry that he is willing to destroy his sister's happiness in order to keep her under his control. These guys are two of the most unlikable people yet they remain fascinating to watch as they use and discard people as casually as most folks change underwear.

The story moves along at a brisk pace and the dialogue is memorable, such as when Falco tells J.J. in response to his wanting the romance between his sister and the musician broken up. "The cat's in the bag, the bag's in the river." Or when J.J. later tells Falco, "I'd hate to take a bite out of you. You're a cookie filled with arsenic."

A great flick though definitely not the easiest to watch. Depending on your own particular level of cynicism you will either agree completely with the aroma of this "success" or else you will find that it stinks to high heaven. 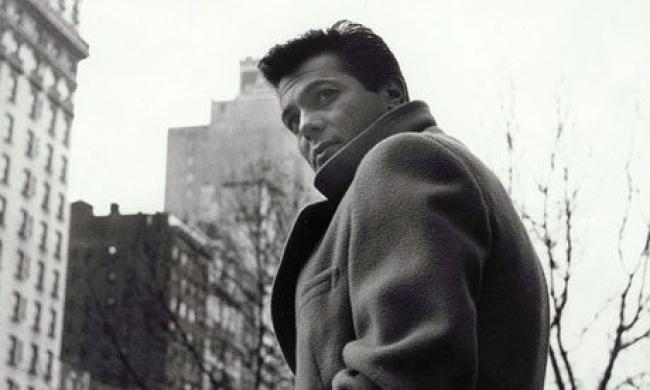 Tony Curtis as Sidney Falco in Sweet Smell of Success.

All three of the Movie Buffs on this site have mentioned at one time or another in their reviews the importance of having likable characters in movies that the audience can root for. However, Sweet Smell of Success is proof that isn't always necessary because, as Patrick mentioned, this movie goes in the opposite direction and features some of the least likable characters ever put on film. The entertainment comes from seeing just how far into the depths these characters are willing to go and to then watch them start picnicking on each other.

Lancaster was originally just one of the film's producers and Orson Welles was sought to play the part of Hunsecker, but United Artists, who was distributing the film, wanted Lancaster because of his box office appeal and because he'd already worked so well with Curtis on Trapeze. His physicality adds to the role. He's threatening not just because he's an influential writer, but also because he looks like he could beat up anyone in the room. He was deliberately filmed from a low angle with the lighting behind him so that his browline glasses cast shadows on his face. In the words of director Alexander Mackendrick, Lancaster looks like a "scholarly brute".

While Lancaster was a reluctant star, Curtis (who also co-produced) had to fight to get the part of Sidney Falco. He was tired of playing lightweight prettyboy roles, but the studio was reluctant to play with his image. It's actually that playboy image of his that makes the part work so well. His looks and charm belie his slimy underside. Occasionally, he shows flashes of decency, but he never lets them get in the way of trying to further his career. His lowest moment is the one Patrick mentioned, when he pimps out a lady friend who has come to him for help. Lancaster as Hunsecker, sums up Curtis's Falco perfectly with this bit of dialogue, "Mr. Falco, let it be said at once, is a man of 40 faces, not one - none too pretty, and all deceptive. You see that grin? That's the, eh, that's the Charming Street Urchin face. It's part of his helpless act: he throws himself upon your mercy. He's got a half-dozen faces for the ladies. But the one I like, the really cute one, is the quick, dependable chap. Nothing he won't do for you in a pinch - so he says. Mr. Falco, whom I did not invite to sit at this table tonight, is a hungry press agent, and fully up to all the tricks of his very slimy trade."

Alexander Mackendrick wasn't the obvious choice to direct. The Scottish director made his name directing such Ealing Studio comedies as Whiskey Galore! and The Lady Killers, a far cry from the dark and twisted film noir of this movie, but he does an excellent job. He and veteran cinematographer James Wong Howe (whose career stretched from 1923 through 1975) give the film a decidedly distinctive look. Much of it was filmed on location in Manhattan, mostly in and around Times Square at night, which adds to the authentic and gritty feel to the film. It's beautifully shot in black and white, with plenty of shadows and shades of grey. Adding to the atmosphere is the jazzy soundtrack by Elmer Bernstein and the snappy, catchy dialogue.

Considered a flop at the time of its release, this movie has grown in stature ever since. It's not hard to see why. You won't like these characters (if you do, I'm a bit concerned about you), but you will find it hard to stop watching them. 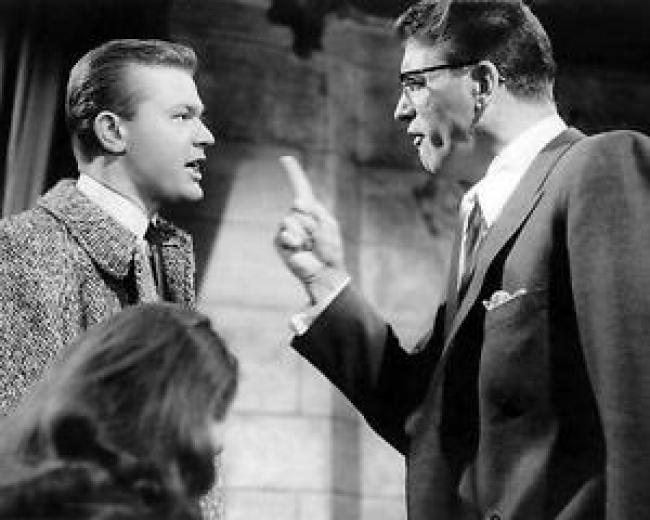 Martin Milner and Burt Lancaster in Sweet Smell of Success

Yes Patrick, Sweet Smell of Success is filled with beautiful black and white cinematography. Filmed on location, I wondered if everyone in the background were extras or was this filmed on an active street? Historically it makes for an interesting watch.

Both of my brothers mentioned that the two leads are not, in the least, likable. They were both able to still find some entertainment in them. I did not. I hated them both so actively that the only thing that kept me watching was hoping for their downfall. The dialogue is memorable but no one in real life talks the way they do in this movie. J.J., “A lot of people tell me I am a very gifted man but I can’t see around corners.” Steve, “Mr. Hunsecker, you've got more twists than a barrel of pretzels!.” J.J., “Don’t remove the gangplank Sidney, you may want to get back on board.” Sidney, “J.J. it’s one thing to wear your dog collar but when it turns into a noose I’d rather have my freedom.” The lines are nicely descriptive but hardly as authentic as the film's setting.

I did not feel all that sorry for the cigarette girl. The scene where she agrees to have sex with someone who thinks they met before, and may help her ends with her telling him, “It was Palm Springs. Two years ago. Don't tell Sidney.” It implies that she has been around and that they may have even hooked up before. I didn’t even feel sorry for Suzie. She is an adult but cannot stand up for herself. Sure, this is 1957 and it was a man’s world but these women are doormats. Speaking of Suzie, what in the hell is her brothers deal with her? J.J. acts so possessive over her that his feelings for her ring of incestual desire. He is so mad with control over her that he would rather see her hurt and miserable than be out of his sphere of control. Nothing scares him more than another man being an influence in her life.

Sidney and J.J. are two vipers who roam the asphalt jungle terrorizing all that they can, biting anyone who gets in their way. I wanted nothing more than for the two of them to get stepped on. Even when they finally turn on each other I didn't care what happened to either.

Steve is a sympathetic character. He is nothing more than a man who fell in love with a girl who has a psychotic brother. He tries to defend her but it takes far too long for her to come around. Maybe my brothers didn’t recognize him or maybe they just did not care to mention it but I recognized the actor who played Steve, Martin Milner, from a television show, Adam 12, I watched as a child with our fourth brother Tony.

I did not enjoy Sweet Smell of Success nearly as much as my brothers but I did appreciate Tony Curtis’s performance. It is some of his best work. His Sidney is charming but oh so deceiving and vile. Curtis has charm in spades and it truly makes the character all the more believable.

This film is definitely an acquired taste.