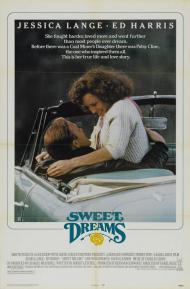 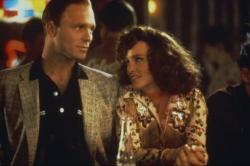 The one thing that separates a good biopic from a great one is the ending. Logically the subject is almost always an exceptional person (otherwise why make a movie about them?). But without a great ending what's the point? Ray and Walk the Line, while both good movies, lacked this essential ingredient. OK, both men overcame drug addictions but both movies sort of just run out of gas instead of ending with a bang. Sweet Dreams tells the life and tragic death of country music legend Patsy Cline.

For an actor I'm sure it's a great challenge to do your own singing in a movie, especially if you are imitating a legendary performer. But other than the novelty of watching them pull it off I think it defeats the purpose of the movie, which should be a celebration of the subject's talent. And unless you're Barbra Streisand and can outsing Fanny Brice, why would you want to hear someone who isn't as good pretending to be the real thing? Wisely, the makers of Sweet Dreams had Jessica Lange lip synching to the real Patsy Cline's records.

This movie was criticized at the time of its release for being historically inaccurate. I say big deal. Biopics aren't documentaries. They are meant to entertain while giving us the impression of the famous person's life and career. Maybe Patsy Cline wasn't as much of a victim as portrayed here, maybe she wasn't as famous during her lifetime as the movie shows. Nonetheless you get a feel for this legendary talent. And she is not portrayed as a saint by any means.

Jessica Lange gives a remarkable performance. She is sultry and full of life but with an underlying melancholy that is never fully explained. She makes you believe that she is Patsy Cline though, no doubt about that. Ed Harris and Ann Wedgeworth give great support as Patsy's philandering husband and steadfast mother respectively. The three of them rise above the rather average script which is pretty much by-the-numbers.

The songs are worth the price of admission alone. Patsy Cline was in a class by herself vocally. She imbued every word with so much emotion. You feel her pain in a very raw way. And then there's that ending. Knowing the facts of Patsy Cline's death does not prepare you for the shock of seeing it. It is the most inspired moment in the movie from a directing standpoint. Instead of just telling us with words on the screen we are shown the tragic plane crash that snuffed out this remarkable woman's life so early.

Patsy Cline's amazing voice, Jessica Lange's acting chops and the pull-no-punches ending make you forget every flaw and leaves you with a memorable impression of this biopic. It is one of the best in the genre.

Lange is not singing to Patsy Cline's actual records. She is singing to Patsy Cline's vocals. The music was re-recorded for the movie. I never knew any of Cline's songs before this movie but I remembered most of them right afterwords. Cline's vocal are so distinct and powerful yet she never over sang a song. My favorite line in the movie is when she in listening to some girl sing on the radio and Cline says, "Lord, bitch. You don't sing. You whine. You whine."

Cline's personality and behavior are legendary in the country western music community. I remember my grandparents talking about her many years ago. They referred to how she drank and swore like a man. While recording Crazy she is shown in the movie smoking and asking for a beer.

Although Cline is, by herself, an interesting personality, it is her love/hate relationship to her husband Charlie that is the heart and meat of Sweet Dreams. As Cline says to her pilot, "Charlie and I deserve each other." Where as What's Love Got to do With It showed Tina Turner as a victim, Sweet Dreams has Cline give as nearly as good as she gets.

To disagree with Patrick, the movie does not show Patsy as being all that famous. She sings in odd places like a drive in movie theater and never is she mobbed by fans. Her final song is sung on a big stage with a large audience. I think this was to imply that she was on the verge of making it huge.

The best thing about Sweet Dreams as a musical biopic is that the makers of this movie intertwined Cline's songs perfectly with the plot. "Walkin' After Midnight", "Crazy" and "Sweet Dreams" couldn't fit any better if this entire movie was fabricated.