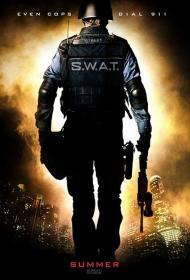 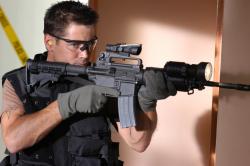 Way back in the day, S.W.A.T. was criticized for being one of the most violent shows on television during the 1975-76 season. It hardly needs to be said that the world has changed a hell of a lot over the intervening decades. In terms of onscreen carnage the new motion picture S.W.A.T. has not kept up with the times. It seems closer to Die Hard eighties type movie violence than to the relentless excesses of this summer's Bad Boys 2 for example. Unfortunately we've seen the plot and read the script about a thousand times before. I honestly can't think of a single scene in the movie during which I wasn't thinking about another movie that did the same thing, better.

Every character, every plot twist, every stab-in-the-back, was as familiar as my underwear.

The cast is good enough to make you care in spite of the hackneyed dialogue they toss around like a Frisbee. Colin Farrell's a bundle of nerves like early Cagney, Samuel L. Jackson is like a hip John Wayne, and L.L. Cool J. is a new Dean Martin; he's musical and as quick with a witty quip as he is with the ladies. The rest of the cast all look like really tough fashion models.

For those who must have it, the plot involves the formation of a new L.A. S.W.A.T team. They go through some training scenes interspersed with scenes of the bad guy. He's Big Important Eurotrash. When he gets arrested, he offers 100 million dollars to anyone who can break him out. Then, within what appears to be a ridiculously short period of time, elaborate plans have been made for his escape, by several different groups. Thank God for S.W.A.T.

It is possible to enjoy this movie. The last half an hour or so is fairly engaging. Still nothing about it exceeded my expectations. 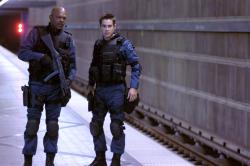 S.W.A.T. is, as Patrick says, unoriginal in plot. A fact that is somewhat made up for by its likable and talented cast. Unfortunately, not even they can make this movie rise out of the mediocrity it seems mired in during its two hour running time.

Not that there aren't some things to enjoy here. The gathering of the S.W.A.T. team with its various members and the subsequent training scenes, I found to be the most entertaining portion of the movie. While the dialogue is a bit weak in most of the movie, here the action does most of the work and allows the characters their best opportunity to stand out as more than just blue suits with badges.

The final battle as the S.W.A.T. team escorts the bad guy to prison I actually found to be the weakest. It is just too predictable, right down to which character will betray which character, who the real bad guy will be and which character will be shot. But then the entire set up involving the villain and his offer of money in exchange for his freedom isn't original. In 1989's James Bond film, License to Kill, the villain offers $2 million to whomever will help him escape from the police. And the rest of the plot involving the person who eventually does try to help the bad guy escape is taken from another Bond film; 1995's Goldeneye.

Compared to some of the other rubbish being released this Summer, S.W.A.T. almost seems like a good movie, but in the long run it's just another action movie without much heart, humanity, or emotion invested in it. 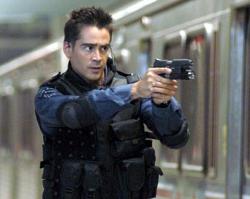 Patrick and Scott call this film unoriginal and predictable. This movie is so full of retread that I made up a game as I watched it. The idea of the game is to call the next scene before it ever happened. I almost always got it right.

A cop gets kicked off the force in a big emotional scene at the beginning of the movie. Gee, do you think he might come back later as a bad guy?

The Euro trash offers big money for his release. Hmmm, which member of S.W.A.T. do you think will betray the group? Will it be the nice old-timer leader, the dedicated white guy, the black guy, the Latin chick, both of whom have children, or the insecure white guy?

I have never watched a film with so much action and been so completely bored. Near the end of the movie, Farrell's cop is fighting the bad guy. The cop gets a knife stabbed through his hand. Right afterwards, he and the bad guy wrestle for a gun. This cop is so tough, that the stab wound didn't hurt him a bit. The scene gets even more ridiculous when after getting the gun; the cop throws it to the ground so he and the bad guy can fight mano a mano. I was hoping a train would run both of them over. The bad guy for being bad and the cop for being stupid.