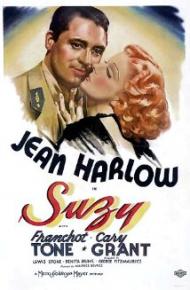 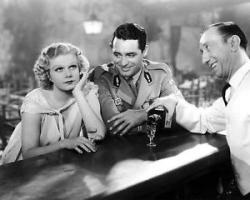 The pairing of two such Hollywood heavyweights as Jean Harlow and Cary Grant should have been a classic. Instead their only pairing was in this mediocre melodrama in 1936. It's not a complete failure as the two leads bring enough charm to make the lighter moments entertaining, but the plot is silly and overly melodramatic alternately.

Of the two stars, it is Harlow who has the lead role. Grant was still on his way up while Harlow was already an established star. In fact, Grant takes third billing behind Franchot Tone. He also, while still his usual charming self, plays something of a bounder and a cad. According to TCM, Grant didn't want the part initially and it was only after the script--which had been partially written by Dorothy Parker--had been punched up with more comic moments that he was happy with it.

The story starts prior to World War I. Harlow plays the Suzy of the title, an American chorus girl who decides to try her luck in London. Once there she runs into Terry (Tone), an engineer who is instantly smitten with her. After a whirlwind romance, they are married, but then in the film's silliest sequence, Terry is shot by a German spy and a nosy neighbor thinks Suzy did it. Instead of hanging around to sort things out or even see if Terry is still alive, she runs off to Paris where she meets a friend and gets a job in a cafe as a singer. Shortly afterward the war starts and Suzy meets Andre (Grant), a French flying ace who Suzy falls in love with. The ending is fairly predictable.

Harlow is good as Suzy, but then this is a part she had played before in better films. She plays nicely off of Tone and Grant, handling the comedy especially well. Although she sings a couple of songs, her voice is dubbed. As always, she lights up the screen.

Tone and Grant are also quite good despite some silliness with their accents. Tone is playing an Irishman, but he doesn't seem to realize he's Irish until about halfway through the movie when suddenly he starts to put on a really bad Irish accent, but only occasionally. Grant doesn't do any accent, except his usual mid-Atlantic one, even though he's playing a Frenchman. Lewis Stone, who plays Grant's father, is also sans accent. This would be fine except other French characters do try to put on an accent, which just makes Grant's and Stone's lack stand out. Apart from those minor quibbles though, they both do great jobs, Grant particularly. His entrance, 30 minutes into the picture, brings some zip to the story. He gets to swagger and charm everyone around him as the pride of France and put his fame to good use seducing the ladies. He's a total bounder, but because he's Grant, he gets away with it with the audience.

There is some aerial footage included, but very little was shot for this movie. Instead the dogfight scenes were recycled from Hell's Angels, one of Harlow's earliest starring roles. They're blended pretty seamlessly, but if you're familiar with that earlier movie, you will recognize them.

Harlow had better chemistry with Gable than she does with Grant, but they also had the good fortune to appear in better films together than this one. Although the plot is a silly little nothing with too much melodrama and both Grant and Harlow would appear in far better films, this one is worth a watch just for the chance to see the two of them together. 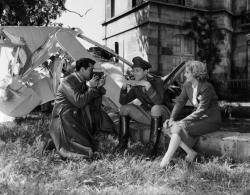 Cary Grant films Franchot Tone and Jean Harlow on the set of Suzy. I wonder if that footage still exists.

Cary Grant, playing one of his few bad boy roles, is the best thing in Suzy (pun intended). He sure does bring some zip to the picture upon making his entrance, in uniform, in a smoky nightclub in Paris. Thanks to its inclusion in the hugely popular MGM compilation film That's Entertainment!, Grant's talk-singing of the Oscar nominated hit “Did I Remember (To Tell You I Adored You)” by Walter Donaldson and Harold Adamson, has become the most famous scene from this otherwise unremarkable motion picture.

1936 was a banner year for the Best Song category at the Academy Awards. Other nominated tunes that year included Arthur Johnston and Johnny Burke's “Pennies From Heaven”, Cole Porter's “I've Got You Under My Skin” from Born to Dance (which also spawned “You'd Be So Easy to Love” (somehow not nominated)) and Jerome Kern and Dorothy Fields' “The Way You Look Tonight”. So who won? Kern and Fields. Fred Astaire's warbling in Swing Time beat out Bing Crosby's crooning in Pennies from Heaven.

I pretty much see eye to eye with my brother as far as Suzy goes. Where I disagree is the degree to which I think the hackneyed plot damages the movie as a whole. In my opinion, even Jean Harlow's uniquely radiant mystique can't save it. Don't get me wrong, she's still a smoldering ember on the screen with her balled up fist and hunched shoulders, angrily tossing that unkempt little mop of hair. But the plot is as predictable as they come and these characters have no depth. Her initial scenes with Grant show promise but once they're married the picture goes quickly downhill. Grant treats her like a dumpy shrew of a housewife and that's one role Jean Harlow could never fit. What she does fit (barely) are several rather stunning gowns, including one memorable long black dress with immense, feathered shoulders. You know, the type of thing you throw on when you don't want any attention.

I always imagine Franchot Tone in a tuxedo and top hat, with scarf, gloves and cane. His blue collar Irishman doesn't ring true to me. His bad accent that comes and goes only makes it worse. And his extended action sequence at the end seems rather odd. You can tell the footage was from Hell's Angels, although I'm not sure if the scenes used here actually made it into the finished print of that movie. Howard Hughes ended up with thousands of unused feet of film that he later sold to other studios in an attempt to recoup some of his loses from that very expensive picture.

Grant is as dashing as the impeccably tailored flying ace as you would expect. It's a role he agreed to after the rewrites but I'm not sure you could say he was exactly happy about it. In his later years he very carefully cultivated and maintained the Cary Grant Image as, not only the epitome of the suave gentleman, but also as a noble hero, and not the kind of guy that would cheat on his wife. This makes the role of the womanizing Andre Charville all the more interesting. Like Scott wrote, the real shame here is what could have been. Given the right script, Grant and Harlow could have made a classic screwball comedy together instead of this rather lazy and forgettable melodrama. 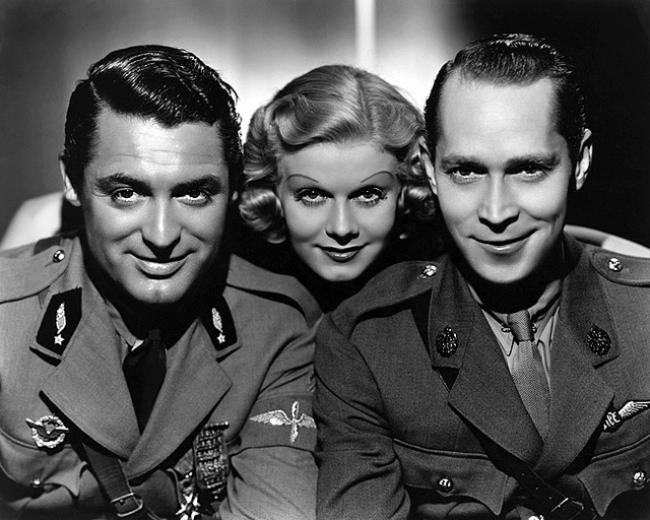 I agree with my brothers that Suzy is almost a complete misstep. The plot is ridiculous and the accents laughable, when they appear. If it were not for the presence of Jean Harlow and Cary Grant, this film would have nothing to offer. Sorry Franchot Tone but other than getting mentioned in a Joan Crawford biography, (they were once married) he is not well remembered, at least not nearly as so as Harlow and Grant.

The problem for me is that the characters are none too admirable. In 3 Wise Girls (1932), Harlow played a girl of some standards, telling her roommate of the rich man she is dating, “Oh, I don’t want his money.” Here she is more of a gold digger, thinking Tone is wealthy after he gives her a ride in a Rolls Royce. She tells her land lady that she will have the money soon for rent as she is now dating “…a prince.” She soon learns otherwise but loves him still.

Also in 3 Wise Girls, Harlow’s character could spot a man on the make within the first few minutes of being with him. Here, she meets Grant in a night club and her character does not have the brains to see that he is a self-obsessed cad, even though he enters the bar loudly acting like he owns the place. He demands the band play a song so he can get all of the audience’s attention and flirt obnoxiously with Harlow. I get that it is Cary Grant, but she is not playing a virgin here, she should have been able to see what a jerk he was on sight. He practically announces it verbatim upon his entrance.

Speaking of Cary Grant’s character, he is likewise not playing a virgin, so why in the hell does he even think to marry Harlow? He is apparently getting laid everywhere he goes by a variety of women so sex is not a motivating factor. He clearly does not love her or anyone else for that matter, including his own father, whom he dumps Harlow onto so he may go back to fighting a war and bedding other women. France sees him as a national hero and he, of course, eats it all up.

Franchot Tone lacks Grant's screen charm and Harlow’s spark. He is a decent enough actor but was missing that unique quality that made him stand out enough on screen to get noticed by future audiences. It does not help him any that he is playing a chump here. He falls in love with and marries a woman who abandons him as he lies dieing on the floor. One of his friends ends up marrying his wife. Tone knows what kind of a person Grant is but he is too “honorable” to tell her? Why the hell not? What does he owe either of these people at this point?

The ending is a lot of hot phooey. Tone and Harlow decide to make everyone think that Grant is a bigger hero than he actually is, just to keep his strong patriotic image going. What do they have to gain by doing that. This is France we are talking about. Letting people know he banged lots of women, including a foreign agent, is hardly going to smear his reputation. It would probably only heighten it. The worst moment is when an enemy pilot sends his regards, prompting a French officer to state of Grant, “Even his enemies recognize his heroism.” Grant’s character never gets his proper comeuppance.

Not only do the characters never ring true or likable, the plot is just as Patrick wrote, hackneyed. The ridiculousness of the idea that Harlow would not only meet two different men at different times and in different countries who each know the same spy in question and also marry them both, is one of the worst cases of movie coincidences ever written. In old western films, the good guys tended to wear white hats and the bad guys dark hats. Here Harlow is a platinum blonde while the villainess is a brunette. Harlow must have recalled that stereotype as she suddenly recognizes the spy because a year earlier she saw only her eyes for a brief couple of seconds from across a room. Huh?

Put this one down as only a chance to see two such classic stars appear on screen together. There truly is no other reason to watch it. Well, except for maybe to see how not to write a movie script.