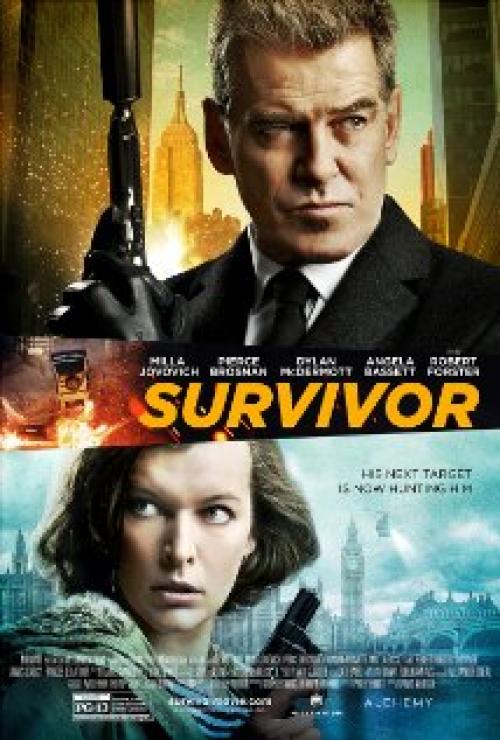 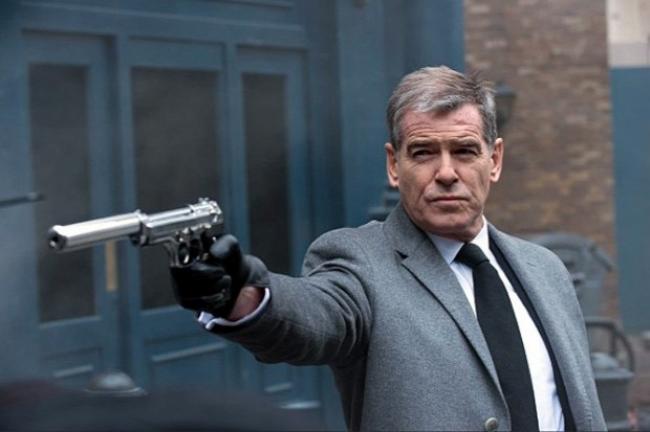 I'm always a fan of a good espionage thriller. From the outlandish missions of James Bond to the dark and squalid world of John Le Carre, I've watched countless films and read even more books in the genre. This explains at least part of why I had high hopes for this one despite its limited release and lack of any kind of word of mouth. My anticipation was helped by the presence of some recognizable faces in front of and behind the camera. Sadly, none of those faces are able to do much with this poorly written and implausible story.

Milla Jovovich stars in this poor woman's version of Three Days of the Condor. She plays Kate Abbott, a security director working in the American Embassy in London. When she survives a bomb explosion intended to cover the traveling from London to New York City of a group of scientists intent on a terrorist act in the United States, she ends up on the run with a hired assassin played by Pierce Brosnan hot on her tail. Her reasons for remaining in the field however are weak at best and so the chase feels contrived as does the "explosive" ending. While there are a few, minor, tense moments, none of them add up to very much.

The story begins with two Marines getting captured in the Middle East, one of whom is used to blackmail someone in the American Embassy, but that storyline fizzles and becomes so inconsequential later that you wonder why it was even included. There are hints of a romance between Milla's character and her superior played by Dylan McDermott, but that too goes nowhere and likewise feels superfluous.

Milla, who's made a name for herself as an action heroine in films like the Resident Evil series, is playing it much more low key here. Despite having "Security" in her job title, she's no spy or weapons expert. Milla's past films actually work against her in this case. When she rolls up near the beginning of the film on her motorcycle, she brings with her an expectation of badassery. You expect that at some point she is going to start fighting back, but she remains the damsel in distress for most of the movie, only coming into her own near the film's climax, but even then she's playing an every woman and not an action figure.

Brosnan's aging assassin is the most interesting character. Known only by the code name Watchmaker, he's supposed to be one of the world's best killers and Brosnan's movie past works in his favor to convey that. Despite his advancing age, you believe he's good at his job. The plot point that's hard to believe is that Milla's character manages to evade him for so long. He's cold and calculating and although he's able to kill anyone else he wants, she always manages to elude him. Although I didn't want the final terrorist attack to succeed, I have to admit, I didn't want to see him get defeated either.

Most of the film is just a long chase as Milla tries to stay one step ahead of the assassin. As I said though, the reasons for her not simply returning to the embassy, especially immediately after the explosion, are never satisfactorily explained. And other characters continue to act in implausible ways throughout the film to simply keep the plot moving. If everyone in the story behaved rationally, the entire plot could be wrapped up in about 15 minutes, but instead it stretches on for 90, while feeling even longer.

To make a good espionage thriller you can either go the exotic, glamorous route where anything is possible, or you can have an intelligently written, dark and twisty story filled with betrayals and mystery. Survivor tries to do a little of each and fails at both. There's a reason you've probably never heard of it. 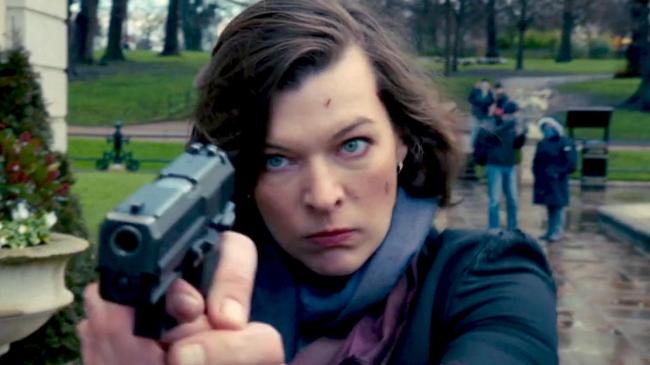 I certainly watch and read many fewer espionage movies/books than Scott does. Perhaps, therefore, I have less discriminating tastes in the genre because I actually kind of enjoyed Survivor. Sure many parts of it are implausible but that's true of most spy films. The action is decent and the cast is certainly a talented bunch. I think critics are being too harsh. It's far from a great movie but it's not a terrible one either. And Survivor does have two great things going for it: namely stars Milla Jovovich and Pierce Brosnan.

I liked the fact that Jovovich isn't playing a superwoman. Her badassery is there, it's just of a more subtle nature. She makes mistakes but she learns quickly and is able to adapt while on the run. Her believable portrayal of the character does seem at odds with some of the more outlandish plot details though. For one thing, without altering her looks, she's able to slip past international security checkpoints at both Heathrow and JFK airports despite the fact that her image is plastered all over the television news. Kate Abbott is a real person living in a movie world.

As for Pierce Brosnan, he's superb as the aging killer for hire with liquid ice running through his veins. 60 at the time of filming, Brosnan's world weary, but still handsome, visage perfectly suits the character. He's a man of few words but when he speaks, people tend to die. One guy gets stabbed in the ear because he asked the wrong question. “You shouldn't have asked about that thing in Dubai.” The Watchman calmly states as he wipes blood off the weapon.

At the risk of appearing sexist I've often found it quite unbelievable when 120 lb women are able to beat-up 180+ lb men in the movies. The final physical struggle between Brosnan and Jovovich doesn't have that problem. On the contrary it's very believable. He's an old man after all and he still very nearly gets the better of her. I loved his look of astonishment mixed with begrudging respect when he realizes his target has followed him to Times Square. His fate is totally deserved.

The supporting cast of famous faces is given much less to do. As Scott wrote, the script hints at the possibility of a romance between Kate and the Dylan McDermott character, but it goes nowhere. Poor Angela Bassett is reduced to playing an inept ambassador who makes all the wrong decisions. One of my favorite funny ladies, Frances de la Tour, gets a few decent scenes as the one person on the inside who never loses faith in Kate's innocence. She's able to work wonders with a computer and covertly provides Kate with tech support; a role that in most movies is usually played by a man.

For casual movie fans with low expectations, Survivor should provide a decent enough entertainment ride. As my brother's review testifies, die-hards of the genre should look elsewhere. 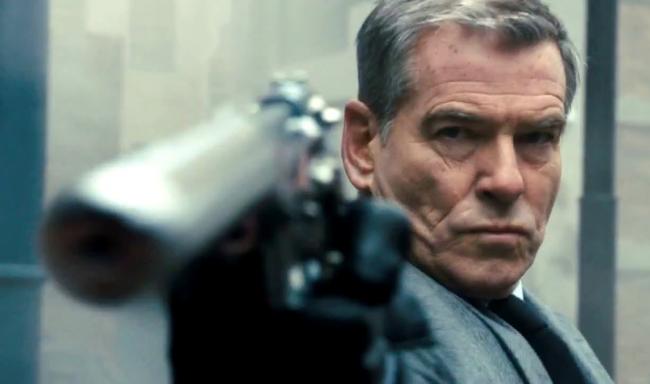 I am with Patrick on this one. I was very entertained by this quick paced chase film. Scott commented that the part about the Marine getting captured in the Middle East fizzles and becomes inconsequential. I am guessing that he was expecting a rescue or at least a resolution to whether or not he lives but the only purpose the soldier serves the movie is to act as motivation for his father. His story has nowhere else to go as far as what happens to Kate Abbott and it is her story, not his.

Where I agree with Scott is that there is never a decent reason for her to not go to the embassy.  Had she just gone in immediately after the explosion and initial contact with the Watchmaker, she would have not had half the problems she ends up with.  Another flaw, however minor, also comes right after the restaurant explosion, which was so large that it killed a woman in a store across the street. Kate runs through that store and out the back door onto another street. Although just around the corner from a huge terrorist attack, pedestrians are walking nonchalantly down the street as if nothing has happened, even though ambulances are racing by with sirens blaring.

Survivor is a film of its time. It refers to 9/11 and even features a clip of the burning towers. Its subject matter is all about terrorist attacks but, of course, it does not feature any Muslim terrorists as most movies tend to avoid pointing the finger at the fanatics that have been responsible for most of the world’s actual terrorist attacks. Instead of intolerant religious fanatics, these bad guys have more base motives.

Referring to an upcoming bombing, Pierce Brosnan says to Benno Furmann, “For Emil, it's personal but for you it's all about greed.” Furman specifies, “For a hundred million it's a lot more than that.” In real life, terrorists kill to make a religious and political point while here it is simply to get revenge and make even more money.

Milla Jovovich is fine enough in the role but her portrayal of a realistic character contradicts her actions. She should have gone in right away and as Patrick mentioned, her ability to slip through international airports is laughably outlandish, especially after all the security we are told goes into stopping people on watch lists from travelling abroad.

Pierce Brosnan steals the film even though he has less screen time that Jovovich. After playing the world’s most famous spy hero, Brosnan has explored darker roles of men with questionable morality. He has nearly made a post 007 career on playing the anti-Bond. Click on his name and see a filmography filled with movies where Brosnan played a man of action who was on the opposite side of the law or a gray area somewhere in the middle.

Although his hair has greyed and his face developed a few wrinkles, Brosnan still has real screen presence and movie star charm. In fact, his age has given him a certain gravitas that some actors seem to be blessed with as they get older. I enjoyed Brosnan as James Bond and roles like this prove he could still be playing him today, had Bond been allowed to age.