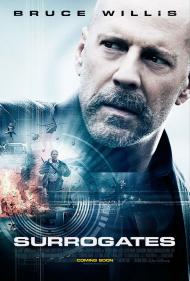 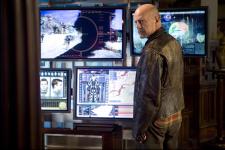 Surrogates has an interesting premise that fails to live up to its potential. It is set in the not too distant future. A world where the majority of humans live vicariously using synthetic bodies and virtual reality technology. The rather convoluted plot involves a new weapon capable of killing people while they are connected to their surrogate.

There are many plot holes. For one thing, with the exception of a few vagrant humans, the entire population seems able to afford surrogates. There are very few children or babies shown, nor is it explained exactly why everyone has forsaken real life for surrogates. Other than the simple fact that life is safer if you never leave your home oh and you can stay young and beautiful forever.

Technology aside, Sci-fi movies need to be plausible. The motives of the characters need to make sense. And although Bruce Willis tries his best, the society conjured up just doesn’t seem believable. One humorous moment worth mentioning is when a beautiful female surrogate turns out to belong to an overweight middle-aged man.

The future technology angle is not this movie’s only problem. The plot is not very engaging either and it is clear who the villain is going to be. There is also a plot twist that is painfully obvious. Do yourself a favor and skip this one or if you really must see it then wait for the DVD.

How is it possible to make Bruce Willis so dull?

Patrick, I could not agree more. The only thing this movie has going for it is an interesting idea, but they do nothing good with it. I had hopes for b-movie cheesy goodness at least, but instead was served up a dull story with plot-holes galore.

My biggest question about the plot is how is it that this amazing Surrogate technology exists, but nothing else has changed? The cars, the television, the computers and cellphones all seem like 2009 technology, and yet somehow everyone owns this amazing robotic body that they're able to project their consciousness into. Should robots even need to hold a cellphone? Surely the ability to make a phone call could be built into the surrogate.

Even apart from the ridiculous use of technology this is still a bad movie. Bruce Willis is normally so full of cocky charm and swagger that you wouldn't think it was possible to make him as boring and dull as the makers of this film are able to make him. And he's the highlight of the cast. Ving Rhames is as flat as a machine and he isn't helped by some pretty bad dialogue. Rosamund Pike looks good, but that's about all she's able to muster.

Like so many Sci-Fi movies from Hollywood this one espouses the evils of technology; a plot device that has gotten old and tired, which is coincidental because that's how you'll feel by the time this movie is over.

Why did no one make a surrogate that looked like a movie star?

Surrogates is not a great science fiction film, but it is worth a watch. Like Brave New World and 1984, Surrogates is a science fiction story commenting on our actual society. It does not so much espouse the evils of technology, but reflect where we are possibly headed with it. We do live in a world where many humans live vicariously through virtual reality technology.

Although we do not have the technology of surrogate bodies, most of us do have the internet. This allows for email, texting, gaming online, facebook and other social networks. I saw an article on television where a women ignored her children to work on her virtual online vegetable garden. My son just spent real money on a shirt for his X-Box 360 avatar. Surrogates is merely an exaggeration of the world we currently live in.

Besides making social statements on our current habits, Surrogates is still a decent film. There is plenty of action, but the deaths are hollow. Usually it is a surrogate that is killed, and even if a human is killed with it, it carries no weight as we never got to know the real person.

Bruce Willis plays a man who is emotionally stunted because of his son's death and consequent emotional separation from his wife. The plot tries to garner some sympathy from the audience by having him try to reconnect with her. They have separate bedrooms and social lives. They are nothing more than roommates with a romantic history. The story would have been stronger had it shown them having a great marriage. Showing them going out into society as fake robots, while being themselves together at home, would have better brought home the symbolism.