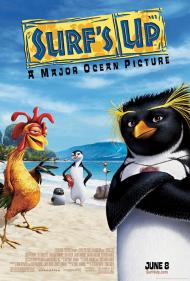 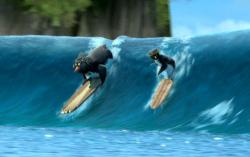 Surfboarding penguins in Surf's Up.

Surf's Up is just another penguin movie, and the film makers knew this so they approached it from a different angle. Nearly the entire movie is presented as a documentary on a new surfer named Cody. A film crew follows him around as he goes for his first big win. This is a unique angle for an animated movie but it soon falls into typical cartoon mode.

As in nearly every Disney cartoon, Cody is a child of a single parent. Like in the recent Happy Feet, Cody does not fit in with his community. In fact, Surf's Up makes a reference to Happy Feet when someone asks him if he has any other talent and he replies, "You mean like, singin' and dancin'? Naw, man, I just surf."

Cody gets discovered by a whale riding, surfer scout and taken away to a tropical island for a big surfing contest. There he befriends a surfing chicken, who comes across as a burnout drug user. He falls for a lifeguard, and most importantly, is taken under the wing of an old surfer.

Like Happy Feet sledge hammering it's environmentalist message, Surf's Up beats it's audience senseless with it's "winning isn't everything" theme. The big surf star, Tank, is a huge jerk that nobody likes. He only competes for the trophies and glory and that alone makes him a bad guy. Cody learns that it is not at all important to win but to just have fun. WHAT A BUNCH OF CRAP! No matter how many times you tell your soccer or baseball team that it is okay if they lost as long as they had fun will it ever make them feel as good as actually winning does. I know the intentions of this movie's ignorant moral message is meant well, but no little kid is buying it. Observe any little league team that walks off the field. The losers are surrounded by their parents telling them that it's okay, but it honestly does nothing in making them feel better. The winning kids, however, all feel very good about themselves, and they should. Winning is not a bad thing.

There was an episode of Dharma and Greg where Darma wanted to enter and win a ballroom dance contest, but her liberal mother told her not to because, "When we compete we do not complete." Surf's Up is like that.

Studios that make these movies, spend millions of dollars on great animation and all-star casts, but what has happened to the fun in animated films? Why do they all think they have to push some worthless message down the throats of kids who just want something to laugh at and enjoy so they can later bug their parents to buy some tie-in toy?