Christopher Reeve in Superman: The Movie.

Superman: The Movie was the first great superhero movie ever made. For the most part, it treats its subject matter seriously. It has a good plot, and man, what a cast.

Anyone who makes any sort of fantasy film must understand, and few do, that the movie must be treated and made as seriously as any Meryl Streep drama. Look at the Batman movie series. It started out a bit cheesy and got campier with each sequel, until Christopher Nolan thankfully reinvented it.

Superman is a serious look at an alien who comes from another planet and assimilates himself into our society. The part with him as a teenage Clark Kent gives him a lot of character. I wished that part had been expanded on. It can be frustrating as it is being a teenager. Just imagine how it would be if you had a secret that big to carry around with you.

The plot, besides simply introducing the main character, involves a near cartoonish scheme by Lex Luther to sink California into the Pacific Ocean with a huge earthquake. This is easily the weakest point to the movie. However, the cast still plays it all so straight that you accept it as a legitimate scheme.

The movie boasts an amazing cast. Gene Hackman hams it up as Luther.   It is Marlon Brando's last decent part.  He had the coolest sounding voice.  Glenn Ford, Rita Hayworth's paramour in Gilda, is in one of his last roles as Jonathan Kent. Also in the cast from old Hollywood is Little Rascal's Jackie Cooper as Perry White. Margot Kidder is excellent casting as Lois Lane. This part could have easily been little more than some T&A, but Kidder's Lane is flawed and humorous.

Christopher Reeves absolutely makes the movie. He is not in grotesque body builder shape, but who ever said Superman's strength comes from working out. His acting is sincere. He goes from funny Clark Kent scenes to teary eyed frustration over Lois's death.

The special effects are looking a bit dated, but it would be wrong of me to tax a movie simply because it lacked modern computer graphics. All these years later it remains a quality put together fantasy film that a few technical weaknesses can be overlooked.

One last thing to mention is the John Williams soundtrack.  My youngest son and I hum along every time to the catchy theme music played during the opening sequence.  It is one of my favorite musical pieces.

There have been superhero movie serials and superhero television shows, but Superman: The Movie was the first serious approach to presenting a superhero as a real character.  This big budget movie is the granddaddy of superhero films and everyone that has come since owes it a debt of gratitude. 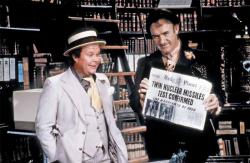 Ned Beatty and Gene Hackman in Superman: The Movie.

I had not watched Superman: The Movie from beginning to end since seeing it in its original theatrical run nearly a quarter of a century ago. I recently bought it on DVD and was pleasantly surprised at how much I enjoyed it and how well it has stood the test of time. Special effects and cinematography age much better when viewed in the wide-screen format.

One unusual thing that I think adds to the success of the movie is that it is aimed more at adults than children. I remember as a boy of twelve being frustrated by how long the story takes to develop. After all Superman in his costume is not shown until more than fifty minutes into the movie and then only for a brief moment. It takes another fifteen minutes introducing Clark Kent to The Daily Planet before we get a full scene of Superman fighting for Truth, Justice and The American Way. Then the story becomes a romance between Lois and Superman. As Eric mentioned, only the parts dealing with Lex Luthor are truly aimed at children. All of these things, along with the great supporting cast and a truly remarkable, career-making performance by Christopher Reeve, elevate it above the superhero genre to the level of classic movie.

Whereas as a child I waited impatiently for Superman to fly through the air, now I enjoy the beginning hour of the movie more. The background on Krypton dealing with his father Jor-El (Marlon Brando always seemed like he was from another planet anyway), and the section where his Earth parents adopt him, and his frustrating teenage years are interesting and well done.

The modern day story of Superman in the Big Apple doesn't disappoint either. The special effects, while no longer jaw dropping, still hold up and the casting is absolutely perfect. Christopher Reeve IS Superman. 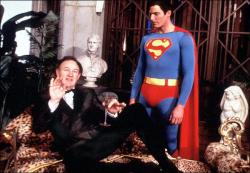 Gene Hackman and Christopher Reeve in Superman the Movie.

While I still think this is a good movie, after my brother's overwhelming praise, my review of this movie will seem the most negative. Superman: The Movie is an impressive movie, with some good casting (but not all) and if not the best superhero movie, it was at least the first superhero movie to take itself seriously.

First let me say that Christopher Reeve does a great job in this movie. Anyone who can utter the line, 'I'm here to fight for Truth, Justice, and the American Way.' And not have it sound corny in any way, is doing something right. His subtle character changes between Clark and Superman; the stooped shoulders, the nasally way of talking, and just his mannerisms in general, almost make you believe that Lois would really not be able to see that they are the same person.

Despite Eric's claims that Margot Kidder is great as Lois, I have always despised her in this role. She annoys me to no end. What Superman could possibly see in her to make him fall instantly in love with her is completely beyond me. And can someone please tell me what in the Hell the writers/director were thinking when they had Lois mentally recite the words to that damn, 'Can You Read My Mind' song when she's flying with Superman for the first time? Couldn't they just have played the song with an actual singer while they were flying ?

Eric and Patrick are also more forgiving of the Lex Luthor sub-plot. While the movie goes to great lengths to develop Superman as a character, it seems that Luthor and his moron henchmen are still just cartoon characters. Why would someone as smart as Luthor ever employ Otis or Miss Teschmacher? Oh sure, he's probably sleeping with her, but why Otis? And what's Luthor's problem anyway? We know next to nothing about him.

Ok, so ignoring Margot Kidder as Lois and just accepting the silly villain story as it is, and you are left with what is still a very good movie. It's just that I found the back story to be more interesting than the main plot. As Eric said, the makers of fantasy movies have to treat their stories like Shakespeare and not cartoons, which they almost do with Superman: The Movie, but just fall short, expecting I think, that because it is merely a superhero movie, that we will be more forgiving. If they had only held the same high standards throughout the entire length of the movie, it would have been perfect.