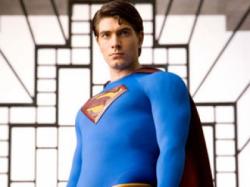 Superman Returns is a better sequel than any of the Christopher Reeves sequels. Bryan Singer brings new life to the franchise while paying tribute to the Richard Donner 1978 movie. References to Donner's film are thrown through out Returns. Lois asks "How many f's in catastrophic" like Margot Kidder asked "How many r's in rapist." In Return, Superman says, "Statistically, flying is still the safest form of transportation." much as Christopher Reeves said about subway travel.

The big difference is that Superman returns after 5 years of looking for what he hoped would be the remains of his planet to find that Lois now has a child and a fiancé. Superman now feels even more alone than ever. Other than his mom, only Jimmy Olsen seems overjoyed to see him. Lois is about to receive an award for an editorial on why the world does not need Superman. Yeah, she's bitter! Superman hopes to reconnect with her but she is happy in a new relationship.

While Clark/Superman is trying to fit back in, Lex Luther goes to The Fortress of Solitude and steals Jor-El's crystals. In another nod to Donner's film, Luther also steals some kryptonite from a museum. The sign on the display case reads that it was found in Addis Ababa in 1978. He then goes about the ridiculous task of creating his own continent. Much like Gene Hackman's Luther, Spacey's is also into real estate. The way he goes about it would likely destroy the entire planet. If that was his goal then so be it, but since it is again all for money and power, it makes little sense for him to kill the very people who could give him those things.

Routh does a great job as the sensitive lovelorn alien! I have heard so many people comment that there is a physical resemblance between him and Reeves. I think they sound alike even more. My only complaint abut him is that he seems too young. Yes, he and Reeves were both 26 when they first donned the cape but this movie supposedly takes place at least 6 years later. Routh looks more like a frat boy than a father with some aged experience.

Bosworth is adequate as Lois but she plays her too seriously. Kidder had more personality. Superman The Movie is 30 years old yet the scene where she has a cigarette in her mouth while trying to squeeze fresh orange juice because it's healthy is still more funny and memorable than any scene Bosworth does here. Bosworth also is not given any lines as good or funny as Kidder had. The greatest line ever spoken by Lois Lane was when Kidder asked Superman, "How big are you? I mean how tall are you?"

Where Superman Returns improves on the original is that Bryan Singer fully understands the appeal of superheroes. Superman, Spiderman, Batman and all of the X-Men are societal outcasts. They all at some point try to fit in. They have amazing abilities but they all have personal issues. The original Superman really did not have any. Kidder would have dropped her panties for him without a second thought. Bosworth's Lane has far to many issues to be so easy. In Superman Returns, Superman doesn't just have to save Lois, he has to learn to connect emotionally with her.

Where as Superman Returns is heavy on sentimental moments, it could have used a little more action. The airplane rescue scene being the best action sequence in the film, but it comes in the first half of the movie. The manner by which Superman derails Lex's scheme is questionable at best. It is a WTF moment that may cause some debate or conversation between fans.

Although Superman Returns is not without flaws, it provides plenty of entertainment and a more personal view of Kal El's inner struggles. It leaves open plenty of room for another installment. The last few scenes suggests plenty without certifying anything. It makes for a frustrating last scene as you want the characters to say more than they do but as the old stage adage goes, "Always leave the audience wanting more." As far as Bryan Singer/Brandon Routh's Superman goes, I want more! 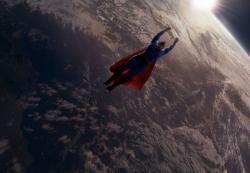 When I first heard that Superman Returns was going to be a sequel to the Christopher Reeves' Superman films, I was dubious. After so many years, how would they explain the gap in time without the actors aging? It turns out that they simply ignore the fact that Superman and Lois Lane are actually younger now than they were the last time they appeared on the big screen. Despite over 20 years having passed since the last movie only 5 years has passed in terms of story and this is a bit disconcerting at first although I quickly got over it because frankly, as Eric said, this is one great movie. Continuing the story doesn't hinder things at all, but instead adds emotional weight and depth to it.

While Eric refers to Bosworth as merely adequate, implying that it is the actresses' fault that the character isn't more exciting, I disagree. The problem with Lois isn't Bosworth. Bosworth's only problem is that she's too young for the part. She's 23 in real life and she looks it. The real problem with Lois is that it's a thankless part. She is reduced to being the damsel in distress, rescued in turn by Superman, her son and her husband. While it's true that Kidder's Lois had a bit more spunk, it had more to do with the writing than it did with her acting abilities.

One thing that Eric barely mentions is the greatest improvement over the Reeves' Superman movies, namely Kevin Spacey as Lex Luthor. While I admire Gene Hackman as an actor, his Luthor, which was played so much for laughs, is the worst part about the old movies. Spacey's Luthor on the other hand, has an edge to it that actually makes him dangerous. When he is kicking the crap out of Superman on the island made of Kryptonite, you see that he is truly a psychopath of which to be afraid. Unfortunately, he is still saddled with idiot sidekicks, but thankfully they are played down and don't spoil the film.

As for Routh in the title role, I can't imagine a more perfect choice for the part. As Eric said, he sounds uncannily like Reeves, but to limit an appraisal of him to mere imitation is to do him a great discredit. He brings a great performance to the role all on his own. His Superman seems more alien somehow. Maybe it's the way that he rarely blinks. His Clark Kent isn't given nearly the screen time as Reeves' was and of course it's still totally ridiculous that no one recognizes Clark as Superman, but that's always been the case and just something you simply have to accept.

Only one tiny thing bothered me about this movie. When Perry White is giving out orders to his reporters to cover Superman's return, he tells one reporter to find out whether or not he still stands for, "Truth, Justice, and all that." Thus dropping, "And the American Way." Why the change? Yes Superman is a hero for the whole world, but since in so many other ways this movie pays homage to both the older movies and the comics, why leave that line out?

Bryan Singer certainly has the touch when it comes to making Super-Hero movies, and like Eric, I can't wait to see his next one. 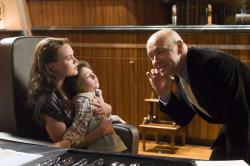 More than half-a-century after Marlon Brando and Eva Marie Saint starred opposite each other in On the Waterfront they reunited for Superman Returns. Well sort of. The late Brando's footage as Jor-El is leftover from the original movie. But Eva Marie Saint is alive and well and plays Clark Kent's adopted earth mother. The two legends have no screen time together but I would not be living up to my reputation as a classic movie fan if I failed to mention this fact.

A great job was done of continuing the franchise after many years. I agree with my brothers completely. One other small difference they didn't mention is the fact that in Superman: The Movie Clark Kent works in the real New York City. Here they have switched it to Metropolis. This is more in tune with the comic books and also makes the suspension of disbelief easier. For example in Metropolis I can accept that no one realizes Clark Kent is Superman. In New York, however, I would have a hard time buying it.

Brandon Routh is perfect in the role. He is especially good in the scene where Lois and her boyfriend rescue Superman from Lex Luthor's clutches. Naturally, being Superman, he must go back and defeat the bad guy. The cool part is that Routh (with some help from the script and director of course) is able to make us feel that Superman is actually taking a brave risk. How often does a superhero movie have any real tension? Superman Returns does.