Christopher Reeve as Evil Superman and Pamela Stephenson as Lorelei in Superman III.

Superman III is generally regarded as the least of the original four Christopher Reeves Superman films. It was a bomb at the box office.  It is, at times, horribly flawed but I actually think Superman IV:  Quest for Peace is the worst.

Superman III starts with Richard Pryor, as Gus, becoming a computer wiz by merely taking a few classes.  Seriously, who thought to cast Pryor as a computer genius?  Clearly the producers were going for a comedy this time around.  For nearly an hour of screen time it works as a romantic comedy.  Lois goes on a Bermuda vacation while Clark Kent visits  Smallville and falls back in love with Lana Lang.

Meanwhile, Gus gets mixed up with a wealthy industrialist, Ross Webster, who sees the value in Gus's computer skills.  Pryor gets such one liners as,  "I don't want to go to jail because there are robbers and rapers and rapers who rape robbers."  Ross has an unattractive sister, Vera, whom many jokes are made about, "Vera, get ahold of yourself. No one else ever will."  He tells her at one point.

My favorite new character is that of Lorelei, Ross's big breasted blonde bimbo.  She speaks like Jean Hagen from Singing in the Rain, but is more like Marilyn Monroe's Lorelei in Gentlemen Prefer Blondes.  Lorelei is smarter than she leads on.  In one scene she is secretly reading Immanuel Kant's "Critique of Pure Reason" and says out loud,  "How can he say that Pure Categories have no objective meaning in Transcendental Logic? What about Synthetic Unity?"  Just then Ross and Vera walk in and she switches back to her squeaky voice.

At around the hour mark, Superman III falls apart completely.  Gus shows Ross some wrinkled drawings of a computer he drew on some scrap paper.  From those scribbles, Ross has the computer built.   It has the power to do absolutely anything.

The most fascinating plot angle involving Superman himself is when Gus finds some Kryptonite and exposes him to it.  Gus is confused as it does him no visible harm.  The Kryptonite, it turns out, was a different kind than the killing kind.  With a plot device that Smallville would milk several times, this Kryptonite turns Superman evil.  He busts a hole in the side of an oil tanker and has sex with Lorelei.   The scene where he fights himself and forces himself back to normal is Reeve's best scene as Superman.

The computer is ridiculous, as is Superman's fight with it.  When he fixes the leaking oil, he simply blows it back into the ship.  None of it makes the least amount of sense, but then this is a story about a man who can fly.  The one thing this movie gets right, is that it does not create any new powers for Superman as Superman II and IV did.  SUPERMAN DOES NOT HAVE TELEKINESIS!

Superman III is misguided and I blame the writers.  One original story was to have Brainiac as the villain.  They should have gone with that idea.  It would be more believable having an alien build a super computer with alien technology that can do amazing things than how it is shown here.   Superman III has some good moments, the problem is that damn few of them feature Superman. 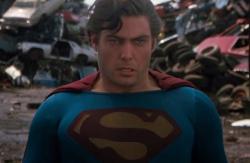 With the firing of Richard Donner and with him the uncredited script doctor Tom Mankiewicz who had worked on the previous two films, the father and son producing team of Alexander and Ilya Salkind were able to make the Superman film they wanted to without interference. They, along with director Richard Lester, inject an even stronger dose of comedy than they managed to insert into Superman II. This might have worked if the comedy was actually funny and if the tone was more even. Instead you have slapstick in one scene and then an evil superman battling himself in the next. This might not be the weakest of the Christopher Reeve's Superman films, but it's easily the worst of the three produced by the Salkinds.

Although the Salkinds denied it, it was reported heavily at the time that the reason Gene Hackman didn't return for the third film was because he disapproved of the Salkinds' firing of Richard Donner. Margot Kidder also wasn't going to appear for the same reason, but was at least persuaded to make a cameo appearance. Instead of Hackman as Luthor, we have Robert Vaughn playing a character very similar. He even has a blonde bimbo much in the same vein that Valerie Perrine played with Hackman in the first two films. Kidder's absence, while shoehorned in rather awkwardly, actually works to the story's benefit as it allows us to see a different side of Clark Kent as he returns to his hometown and flirts with Lana Lang (played by Annette O'Toole, who would play Martha Kent in the Smallville television series). Unlike Lois, Lana is interested in Clark and not just his super alter ego.

Richard Lester, while capable of making some very entertaining movies, was a horrible choice of director for Superman. His insistence on sight gags mars both his Superman directed films. The opening credits of this one are played over a scene straight out of a silent movie with a series of slapstick jokes that were old in the 1920s. Apparently Lester took the comic in comic book movie literally. Richard Pryor's comedy has often been blamed for the failure of this film, but it's Lester, not Pryor who is really to blame.

And speaking of Pryor, his inclusion in the film started with an interview on the Tonight Show. At the time, Pryor had a routine in his stand-up act called Super-nigga, about a black janitor at the Daily Planet who was really Superman. While he couldn't perform the routine on the Tonight Show, he made a veiled reference to it during the interview, stating that he was fan of the films. Upon hearing of this, the Salkinds offered him a part in the next one. Pryor would later write in his autobiography that he thought the script they sent him was awful, but he wasn't about to turn down the paycheck they were offering. As Eric wrote, Pryor's portrayal as a computer genius is silly. Why show him as an unemployed idiot in the opening scene who suddenly is able to work wonders with a computer? Why not have him start as a computer genius?

Once again it is Christopher Reeve who is the best thing this series has going for it. He performs above the material and is particularly good in the scene Eric mentioned where he fights himself. The evil Superman angle certainly has potential, but isn't explored enough. He has sex with Lorelei which seems to contradict the previous film where he had to give up his powers before he could do the same with Lois. Then, with the powers of a god at his disposal, the "evil" Superman performs the heinous acts of straightening the Leaning Tower of Pisa and blowing out the Olympic torch. I mean really? That's not evil Superman, that's just annoying Superman.

The villains' plot and their super computer are, as Eric noted, simply stupid. However, this was 1983, the year Time Magazine named the computer as its "Man of the Year". They, along with video games, were cutting edge technology. Part of the final battle between the villains and Superman is even played out as a video game. It's a ridiculous scene without an ounce of tension.

Again agreeing with Eric, there are some good moments here. The scenes in Smallville and Superman battling Clark Kent are the film's highlights. Unfortunately those moments are buried amongst the garbage that is the rest of the movie. Christopher Reeve and audiences deserved better than this.

I pretty much agree with what my brothers wrote but I still managed to enjoy this movie a fair amount. Yes both Superman III and Superman II have very different, and much more comical, tones than Superman: The Movie. I haven't yet watched the Richard Donner cut of Superman II but I have no doubts about its superiority, nor do I doubt this third installment would have been a much better movie if he had been allowed to complete the trilogy. Be that as it may, there is still plenty to like about this movie and Richard Lester's contributions to the franchise.

First and foremost is Christopher Reeve of course. And the script here really allows him to shine. Superman has always been a complex character. He is an alien named Kal-El who adopts two alter egos on Earth, Superman and Clark Kent. This time around Reeves gets to play a third persona. Evil Superman reminded me a bit of Jerry Lewis as Buddy Love in The Nutty Professor. The way he swaggers around with an arrogant smirk on his face, getting drunk and womanizing. Thank god little Ricky is there to plead to Superman's conscience, thus enabling his psyche to split in two in the very next scene where Evil Superman fights Clark Kent. It is far and away the movie's best sequence.

As for Richard Pryor, it turns out he isn't as bad as I remembered him being. He's certainly better than the material, that's for sure, even if he is far from his funniest. One groan inducing scene has him poking fun of the original Superman movie's tagline by having him say, “I don't believe a man can fly.” Still he seemed like an old friend I hadn't seen in a while and I cheered when he helped Superman at the climax. For good or bad the image from the poster where Superman carries him through the air is Superman III's most enduring image.

The special effects hold up about as well as you'd expect. Despite Gus's line to the contrary you will still believe a man can fly. The editing during the Evil Superman/Clark Kent battle is particularly well done. One other thing worth mentioning is Ross Webster's penthouse rooftop set. It has a small snow covered mountain slope for skiing on it. Visually it's quite impressive. It's imaginative and cleverly designed.

Yes Scott, Richard Lester was very fond of sight gags and, as you pointed out, he definitely highlights the comic in this comic book to motion picture adaptation. But as Eric said in reference to the frequent lapses in logic, this is, after all, a movie about a man who can fly. As such I have a hard time taking any of it seriously. On a final note, Christopher Reeve has much more chemistry with Annette O'Toole than he ever had with Margot Kidder.