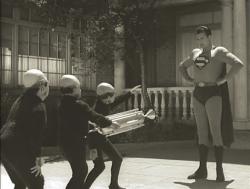 Although there had previously been two serials, one in 1948 and one in 1950, this was the very first feature length theatrical movie to feature the character of Superman. At just 58 minutes, perhaps feature length is pushing it a bit. It was originally produced to test audiences's reception towards a television series based on the character and indeed, the 1952-1958 Adventures of Superman followed. Viewed now, more than 60 years later, it's really more of a curiosity than anything else.

The plot is the most surprising aspect. It's no origin tale and the filmmakers obviously expected audiences to already be familiar with the character. Instead it's a rather low key affair with a moral message at its heart.

Mild mannered reporter Clark Kent and his fellow reporter, Lois Lane, both of the Daily Planet, are sent to the small town of Silsby, home of the world's deepest oil well. When they arrive however, they're surprised to discover that the well has been shut down under mysterious circumstances. What Superman and the townsfolk soon discover is that the drill has pierced the underground home of the Mole Men, a race of hairy, but bald-headed, humanoid creatures. Instead of being villains or monsters, these little creatures are actually quite harmless. It's the humans and their horrified reactions to them who are the true bad guys. It's up to Superman to stand up for the little folks and try to get the people of Silsby to understand that just because someone is different than you doesn't mean they're evil. The theme is summed up with Lois's final line, "It's almost as if they're saying, 'You live your lives...and we'll live ours'". In a time when the country was plagued by fears of communism, the metaphor isn't exactly hard to decipher.

Reeves makes a good, if not spectacular impression, as Superman. He's square jawed and heroic, but rather stiff as the superhero. His costume looks like pajamas and the muscle padding is all too obvious. He's actually better as Clark Kent. Unlike Christopher Reeve's performance, this Kent isn't nearly so bumbling. He's rather stylish and quite confident and capable. The downside to this is that it becomes even more obvious that Clark and Superman are the same person, especially when Kent is always running out of the scene just before Superman enters.

Phyllis Coats plays Lois, and would reprise the role on television for the first season, but wouldn't return for the subsequent ones. She's feisty, but is given little room to develop her character.

The only other actor to make an impression is prolific character actor Jeff Corey. Corey is one of those actors whom even if you don't recognize his name, you will undoubtedly recognize his face. IMDB lists 231 acting credits to him from 1938 to 2000. He was also known at the time for being called before the House on Un-American Activities. This was the final film he would appear in for 12 years after he was blacklisted for refusing to name names. In this film he plays Luke Benson, a close minded character who is gung-ho to kill the Mole-Men as soon as they appear. He has little regard for Superman as well, even trying to shoot him when the man of steel gets in his way.

Although only a moderate success, the film recouped its small cost. The entire thing was shot in just 12 days and the producers made further use of it when they split it into two parts and used it as the finale of the first season of the TV series. Given its minor scope and lack of action, it actually seems more at home on the small screen than the large one. It contains some interesting ideas, but is really only going to appeal to massive fans of Superman or those seeking a sense of nostalgia.