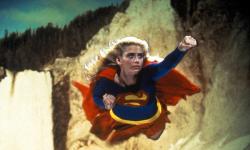 Following the disappointment that was Superman III, the producing partnership of Ilya and Alexander Salkind decided to try and freshen up the series by turning their focus to Superman's cousin, Supergirl. The original idea was to be that Christopher Reeve would reprise his role as Superman to pass the torch along, but Reeve decided against returning and so instead there's just a passing mention that during the adventures in this movie, Superman is busy in a distant galaxy. A poster of him does show up at one point, and Lois's previously unmentioned little sister makes an appearance, as does Marc McClure as Jimmy Olsen, making him the only actor to appear in all 4 of the Salkind produced Super-movies. The idea was to make a trilogy of Supergirl films and Helen Slater was signed to a 3-picture deal, but the cold reception by audiences and critics alike, meant that those sequels never materialized.

The plot starts silly and gets sillier as it goes along. It begins in Argo City, a remnant of Krypton that exists in something referred to as inner space. No details are given as to how it survived Krypton's destruction or just what inner space is. Those are just some of the things that don't make sense however. We also never learn how it is that the citizens of Argo City seem to know all about the Earth and are familiar with Superman and Clark Kent. Peter O'Toole plays Zaltar, an eccentric Kryptonian genius who casually loses the power source that's keeping Argo City alive. Somehow this power source, which looks like a glowing marble, travels from whatever inner space is, to Earth. Kara goes after it and for some reason the exit from Argo City to Earth comes out beneath a body of water and somehow just by entering our world Kara's clothes are changed into Supergirl's familiar outfit.

As with most Hollywood movies where the hero is a woman, so is the villain. Faye Dunaway plays that villain, although I should say "overplays". Her Selena is a wannabe witch who suddenly finds her powers working when she comes into possession of the Kryptonian power source. She has a vague plan about taking over the world, but she hardly seems the type. She's vain and fairly stupid. A good portion of the conflict in the story is simply Supergirl and Selena fighting over the same man. Near the climax the film vaguely shows her discussing plans to conquer the world, but they seem out of place. It's as if the writers decided they needed to make the stakes higher.

Helen Slater was unknown when she was cast. Physically, she's perfect for the role. Her character though, is very uneven. At times she's written as if she's mentally a young child while other times she seems more mature. It's understandable that she would be naive, but the inconsistencies in her character are jarring at times. Slater is quite good when allowed to play closer to her true age, but there's not much she can do in the film's dumber moments. Eric complained about the extra powers Superman was occasionally given in his films, and here Supergirl has the ability to change her clothes and hair color instantaneously.

The special effects are quite well done. By this stage, the filmmakers had perfected the flying routine and some of Slater's flying scenes are the best in the series. Certainly they are light years ahead of those in Superman IV. The production values are quite high in general and all of the silliness is slickly packaged.

There are a few other famous faces in supporting roles. Mia Farrow plays Supergirl's Kryptonian mother. Her part is a mere cameo though and she makes no real impression. Peter Cook plays the former mentor of Selena and he's fine in the part, but his considerable comic talents are wasted as he plays it completely straight.

The Salkinds originally wanted Richard Lester to direct this film as he had Superman II and III, but he turned down the opportunity. The job instead went to Jeannot Szwarc on Christopher Reeve's recommendation after Szwarc had directed him in Somewhere in Time. Without Lester, at least the sight gags that plagued the Superman films are absent. That doesn't mean this movie isn't without humor, just that most of it is unintentional and the result of the general campiness.

It was the failure of this movie that prompted the Salkinds to sell their Superman rights. And that might be this film's biggest sin of all. In a way, we have it to blame for the abysmal Superman IV. This movie is bad, but nothing compared to that later film. Neither one is very good, but this one is bad in a way that's almost enjoyable....almost. 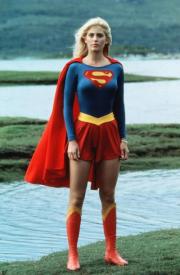 If you have the mentality of a child, this movie has some level of entertainment to offer. For someone with adult sensibilities, it is, at best, a curiosity in poor film making. The general horrendousness of it all and how much you enjoy laughing at its many, many flaws will make it or break it for you.

As Scott wrote, Zaltar, a hippy looking artist, likes playing with the power source that sustains a population of survivors from the planet Krypton. Haven’t those people been through enough? Not to worry folks, seconds after the Omega Hedron (magic marble) breaks through the plastic wall of their outer/inner (whatever) space home, Kara climbs into the space ship that Zaltar just happened to have sitting nearby, and races to Earth to retrieve it. Kara’s father explains that the city can only survive a few days without the Omega Hedron.

Once on Earth, Kara seems to forget her timeline. She decides to attend a private girl’s school, taking classes and playing field hockey. Coincidentally, it is the same school as the sister of the only person on Earth who knows Kal-El. She also falls in love with Ethan, a groundskeeper who is magically induced to love her. Ethan is basically a himbo. He is only there to look good for the ladies and has the brains of a 10 year old. “You just flew over my head, true or false?” As Scott noted, sometimes Kara seems just as stupid as Ethan and other times not.

For no possible reason, she knows all about the secret identity of a person she has never had a single conversation with. Kara is younger than Kal-El, so she must have been born in Argo City years after Krypton exploded. All she would possibly know of him is what her parents could have told her, and all they would have known is that they had a nephew whose father had built a small spaceship. Kara knows the unknowable, such as the adopted name, and nickname, of a person she has never met or even knows is alive. When Zaltar jokes that they can leave the Phantom Zone by train, Kara asks, “What’s a train?” Okay, how does Zaltar know what a train is and Kara does not? She has at least spent a few days on Earth.

For a decade, Faye Dunaway was a very in demand actress. From Bonnie and Clyde (1969) to The Champ (1980), Dunaway was at the top of the Hollywood heap, making many memorable movies. However, Mommie Dearest (1981) and Supergirl permanently removed her from the “A” list. Both of those roles have her playing way over the top. Here she is saddled with such comic book lines as, “I'm considering nothing less than world domination.” “Such a pretty world. I can't wait until it's all mine.” “The world is at last my oyster.” And how does a Earthling know all about the Phantom Zone?

By the time Kara takes the Omega Hedron back, at least a week has passed. Those folks are likely all dead. This dumb broad knows the answer to a ridiculous math question but cannot keep track of days on a calendar. I agree Scott, this movie is so bad it is almost good....almost. 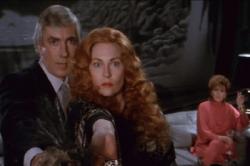 Almost nothing. This movie is terrible. Other than the fact that Helen Slater looks perfect as Supergirl -and I agree that her flying scenes are terrific- there is nothing to enjoy about this campy mess. It was far and away the biggest flop in the original Superman movie franchise. It cost 35 million dollars to make but earned back only $14 million. Even the abysmal Superman IV grossed $15 million. The special effects aren't bad for the time but the script, for many of the reasons pointed out by my brothers, is beyond silly.

I never read the Supergirl comic book so I wasn't aware of her origin story. I looked it up. She made her debut in Action Comics #252 in May of 1959. Believe it or not that comic book is better written than this movie. In that story Argo City is a self-contained community that broke off from Krypton when it exploded and drifted off into space. Green Kryptonite from a meteor shower strikes the lead barrier protecting Argo City. Soon all of its inhabitants will die...

In the nick of time Kara is sent to Earth by her father Zor-El, just as her cousin Kal-El had been sent to Earth by his father thirty years prior. Also like her cousin she is the only survivor of her world. Oh, and just to make sure she is recognized by Superman her parents made a matching outfit for her. See it already makes more sense than this movie, although just how her parents knew what Superman wore is anybodies guess.

Faye Dunaway seems to relish playing an evil bitch -oops I mean witch. She throws herself into the part with gusto. Eric, I think encroaching middle-age was equally responsible for ending her era as a leading lady but there's no denying her Selena is hammier than French cuisine. Brenda Vaccaro -in the Ned Beatty role from Superman- tries her best to keep up, while poor Peter Cook is completely wasted. All of them, including Peter O'Toole and Mia Farrow, embarrass themselves.

The scenes with Supergirl in flight hold up remarkably well. Today's CGI still doesn't look as real as an actual human being flying through the air. But these scenes are hardly worth sitting through the entire Supergirl movie for.