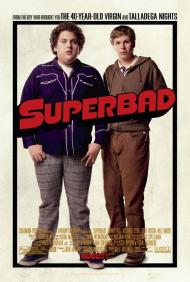 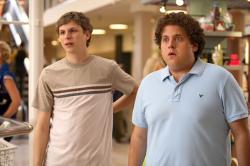 Despite this movie's advertising campaign that states its for everybody no matter what your age, I found that it wasn't really for me. It does contain some funny moments and even a few, really funny moments, but overall I didn't find it to be nearly so good as it has been built up to be.

Like many a high-school comedy, Superbad centers on a couple of students looking to get laid. Seth and Evan are best friends living on the periphery of high school society. Evan's just been accepted to Dartmouth, while Seth was not and so they know that their time together is limited. When they both happen to luck into an invite to a party, contingent upon them being able to provide the booze, they both see it as their chance for a last hurrah, and of course, as a chance to finally get laid. Most of the movie is about their attempts to get alcohol and almost the entire movie takes place over that one night.

Part of my problem with this movie is that I didn't really like either character. Seth is vulgar and selfish. He's rude to just about everybody. Sometimes its funny, but it's also obvious why he's not very popular. He doesn't deserve to be popular. Evan is just plain dull. He goes along with Seth's schemes without putting up a fight and is scared to tell him that he'll be rooming with Fogle; a "friend" of theirs who's even geekier than they are.

Unfortunately for them, the crux of their plan to get alcohol rests on Fogle's shoulders. He has a newly obtained faked ID with which they plan to use to buy the booze. The fact that his ID says that he is a 25 year-old from Hawaii with the single name of McLovin, doesn't help matters. Their problems get even bigger when the liquor store where McLovin tries to buy it is robbed while he's paying for it and the police are called.

It's here that the movie splits into two different parts. Seth and Evan go often on one tangent to find booze while McLovin ends up partying with the police and going on calls with them. The scenes with McLovin are easily the movie's funniest parts. The two police officers are played by Seth Rogen (who co-wrote the script) and Bill Hader (Saturday Night Live). The three of them get drunk, practice shooting their gun and just generally have a good time like a trio of frat boys on a spree. Their conversations, which feel ad-libbed contain the funniest lines and get the biggest laughs.

Seth and Evan meanwhile, go on an overly long trip to a grown-up party where they attempt to steal some alcohol. They bicker and fight over little things, but really they're fighting about their upcoming separation. Again, since I didn't like either one of them, I didn't really care about their argument.

Eventually the two storylines meet up again and they do finally make it to the party. Maybe I've just seen too many movies with big high-school parties, but by then, I'd really kind of lost interest in the story, except for McLovin's part, who continues to entertain right up until his final scene.

Maybe it is just that I'm too old and too far removed from high-school to really get this movie. I don't know. It does contain some funny parts and I wasn't really bored, but despite the laughs, the ending of the movie didn't leave me emotionally satisfied, or even leave me with any kind of emotional reaction at all. For a straight-out comedy this might not have been so bad, but this movie is trying to have heart at the center of it, but it's a heart that I was never able to connect with. 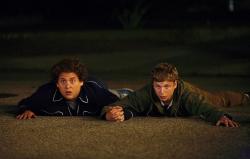 Scott, did you not have a best friend in high school? The heart of this movie is the friendship of two rejects who gave more to each other than they will likely realize for years to come. Alone, either guy would have had a miserable time in school. Together they actually had a great time and will have stories to tell their children. They bring out the best in each other. Scott, how could you not like these guys?

Superbad is hardly that touchy/feely of a movie. It is one of the funniest films of the year. I also thought McLovin stole the movie. My favorite scene is when he is in the bar, drinking beer and talking to the policemen. Suddenly one of the officers radio comes on and a desperate voice says that he needs backup and that there is blood everywhere. The cop casually turns off his radio and continues telling McLovin how much of a whore his first wife was.

This movie could easily be dismissed as a teen sex comedy, but it is a bit more. Seth and Evan want to get laid as if that will be their defining moment to end their time together. What they learn at the end of the movie is that life does not work in such dramatic ways. The real time of their maturing, and stepping away from each other comes in a simple scene where they each go in a different direction after running into two girls they like. Superbad is a sex/comedy that actually treats sex in a realistic way. 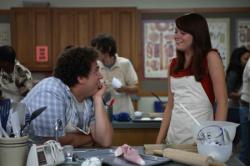 I liked Seth and Evan. The very flaws Scott mentioned are what make them likable. They are real. Seth uses his wit to cover up for his insecurities, while Evan follows Seth because it is easier to stay in his shadow than to strike out on his own. They both know that Evan is smarter and that it is unlikely they will remain friends long after graduation.

The scene in the sleeping bags on the floor of Evan’s basement is wonderfully done. It represents the climax of their friendship, which was the most important non-family relationship of both their childhoods. I loved the fact that the characters were allowed to be tender and emotional with each other without it being turned into the obvious fag joke.

This movie is funny as hell and surprisingly touching. Oh and I agree that McLovin and the cops steal the movie. My favorite scene with them was the climax where they light the squad car on fire and then let McLovin shoot at it while they look proudly on.

Superbad takes its place among classic teenage sex farces like Porky’s, Fast Times at Ridge Mont High, and American Pie. This genre will never die because though fashion, music and slang change with the seasons, the teenage experience is eternal.