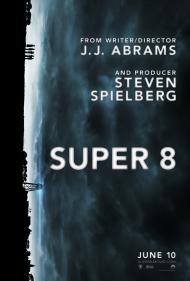 Joel Courtney and Elle Fanning having one of many dramatic conversations in Super 8.

Super 8 was inspired by director/writer J.J. Abrams childhood hobby of making films with his super 8 camera.  Steven Spielberg had the same hobby as a child, and I am sure it was considered a bonus having Spielberg onboard as producer.  However, his name in the credits also serves to remind the audience of a similar film.  Tell me if you have heard this before, a boy living with his single parent makes contact with an alien who just wants to go home.  Yeah, I know.

In 1979, Joe and a group of his middle school aged friends plan to spend their summer making a zombie movie around their small Ohio town.  While filming a scene at night, they become witness to a huge train crash.  They also unknowingly film a large creature escaping from one of the damaged train cars.

Soon, people, car engines, dogs and power lines start to disappear.  Joe's dad, Jackson, is a deputy who starts investigating what is going on after the sheriff comes up missing.  It clearly has something to do with the military as they swarmed the town right after the crash, but they are being tight lipped.

Whereas ET showed the alien throughout the film, Abrams keeps the creature under wraps for most of the movie, as in Cloverfield.  The gimmick worked well in the previews, sparking your interest.  In the actual film it seems more annoying than enticing.  You only ever see it in the dark, and then of course not very clearly.  The reward does not fully live up to the tease.

Super 8 has more action, mystery and special effects than ET, but a lesser narrative.   We never learn that much about what is going on with this creature.   We see bits of it's history through old black and white film, but they cause more questions than answers.  What fills the screen time is Joe's angst.  His mother recently died and his father is emotionally distant.  Joe falls for a girl, Alice, whom they recently talked into acting in their movie.  Joe's father however, has instructed him to stay away from her.

Super 8 has some good, if not terribly original, ideas.  It spends far too much time on the dramatic issues, while never really resolving any of them.   When the movie is focused on the science fiction issues, the movie finds an exciting rhythm that keeps you watching with great anticipation.  The action packed ending tries hard to make up for the rest of the film, and nearly succeeds.   If only it could have pushed the personal issues back a bit and brought out more of the alien.  After all, the previews did not present this as an after school special on the death of a parent. 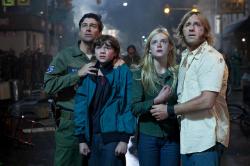 Clearly Eric this movie is meant to be a homage to Spielberg's early films so you're supposed to be reminded of E.T., Close Encounters of the Third Kind and even Jaws. It actually helps you enjoy it if you have seen those films. Abrams does a great job of capturing the era and reminding us of a more innocent time.

Eric, you wanted more of the alien, but I thought the first two-thirds of the movie, before you know exactly what is happening or anything about the alien was the best part. Once we learn details about the alien it introduces some plot holes, becomes a bit over-the-top and even morally ambigious.

I liked the drama and empathized with the kids. Sure it's all melodramatic, but it suits the mood of the movie and of the time period. The young cast, played by mostly unknowns, does a good job. They're likable, believable and you root for them the whole way.

My only problem with movie is that the alien is cast as both misunderstood and a vicious killer, which never really works. We're told several times that the alien just wants to go home (ala E.T.) and the military won't let it, but the alien also makes a habit of killing and eating people. Any chance of my feeling empathy for it vanished during the scene when it's snacking on a human leg like a drumstick. It's kind of like if E.T. had the eating habits of the shark in Jaws. You can see why that really wouldn't work.

The finale is exciting, but it's because of the drama that you mock Eric that we care so much whether the kids succeed in what they're doing. And it's not as though the drama adds overly to the running-time. The film clocks in under 2 hours and the pacing is quite brisk.

I'm also not sure how you can say Eric that the dramatic issues aren't resolved. The danger brings Joe and his dad closer and forces his dad to confront Alice's dad. I'd say they're fairly resolved. Sure, with a touch of melodrama, but still resolved. I also thought you might appreciate that while it does feature a child with a single parent, the loss of the other parent plays a part in the plot and his best friend is shown as having two caring parents.

Super 8 isn't perfect, but it is old fashioned entertainment of the kind that you don't see enough of in the theater these days.

The kids of Super 8.

Scott is correct; this movie is better appreciated if you are familiar with the Spielberg movies of the 1970s and early 80s that Super 8 pays homage to. It does a wonderful job of recreating 1979 and seems to be aimed directly at Three Movie Buffs’ generation as we were 13, 12 and 10 that summer. Just the right ages to have taken part in this small town summer adventure. I have a vivid memory of listening to Chic’s “Le Freak” on the last day of school that year and when the song got played in this movie it put a smile on my face and made me want to sing along, “Awww… Freak Out!” But then I’ve always been a sucker for nostalgia.

The teen angst storyline drew me in. I agree that the mostly unknown cast of kids are good with a special nod to Joel Courtney and Elle Fanning. Joel is the perfect average kid entering adolescence and dealing with the loss of his mother. This is his coming of age summer. He learns to stand up to his domineering best friend, gets his first crush, and begins to heal from his mother’s accidental death while tentatively getting to know his father better. And all it takes is an alien monster and the military rampaging through his home town.

As riveting and action packed as the finale is I have to concur with Scott that there are some plot holes. For example Joe has little trouble locating the garage where the entrance to the monster’s subterranean tunnels is but the military that literally swarms the town, and which has access to more information about the creatures habits, cannot.

Like Eric, the alien is never shown clearly enough for my tastes. Sure in Jaws we had to wait to see the shark but our patience was rewarded with many scenes of the aquatic man-eater during the final 30 minutes. Here the creature (which to my eyes looked a bit like the love child of the Alien monster and E.T.) is never shown in daylight. I kept waiting for that money shot that never happened. It is the one truly disappointing thing about Super 8.

The moral ambiguity of the creature didn’t bother me. I mean an alien monster has to eat too. And the majority of the people it attacked it didn’t snack on. I think any viciousness on its part can be attributed to being held captive, experimented on and hunted down for more than 20 years on a strange planet.

No Super 8 isn't a perfect movie but it is that rare summer blockbuster that I would enjoy seeing again.