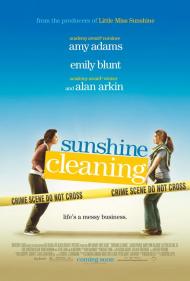 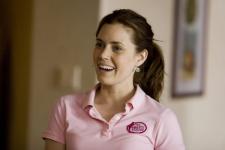 Is there a more charming actress working today than Amy Adams?

Sunshine Cleaning was produced by the same producers who produced Little Miss Sunshine, as the trailers and posters and seemingly all of its marketing were eager to inform us. It even shares a similar setting and they both have sunshine in the title and Alan Arkin playing an eccentric old man. Obviously by reminding us of these similarities, the marketers of it were hoping to generate the same kind of box office receipts and accolades of that earlier hit. However, since this is a completely different movie in tone, plot and feel, their scheme kind of backfired on them, which is a pity because on the whole this is a rather nice little movie featuring two very talented actresses.

Adams and Blunt play sisters, Rose and Norah, living in Albuquerque. Rose is the older sister. She has a son and works as a maid. Popular in high-school as the head cheerleader, her life has pretty much been downhill since then. She's currently having an affair with a married police officer played by Steve Zahn. Norah still lives at home with their father and is the less responsible of the two sisters, but as you can see by Rose's description, that isn't saying that much.

When Rose decides that she needs to put her son Oscar in a private school, she looks for a way to make more money. Mac, her married boyfriend, puts her on to the idea of cleaning up after crime scenes. Enlisting the help of Norah, the two open up Sunshine Cleaning. As the two begin scrubbing up after people's deaths, they begin to clean up their own lives, in part by coming to grips with the memory of their mother's suicide.

These days independent movies all tend to be self consciously quirky and this one is no exception. There are elements of it where you can see that it is trying to be different. One of the main characters has just one arm, for no other reason than to have a character who's a little different. This doesn't really hurt the movie, but at times it seems like all independent movies these days are using the same playbook.

The real joy of this movie is watching Adams and Blunt. Adams is just one of those actresses who is instantly likable. She could play Elizabeth Bathory and make her a sympathetic character. She's playing a woman who peaked in high-school and has made some bad decisions since then, but from the very beginning you're on her side. Blunt is also good in the smaller part. Unlike Adams, Blunt hasn't reached star status yet, but I predict will soon. Her character isn't quite as fleshed out as Adams', but still manages to convey real drama.

One of the movie's weaknesses is that it is clearly a chick flick. While that doesn't automatically make a bad movie, it does mean that the male characters are given short shrift. Sure, Arkin makes this movie better, as he does any movie that he's in, but he and every other man in it are there to support the female characters and are generally given just one character trait to portray.

Despite not being the sequel to Little Miss Sunshine that the marketing almost made it seem, Sunshine Cleaning does pack heart and humor, even if it does wear its independence on its sleeve. 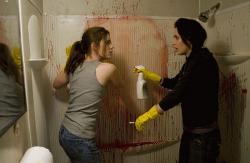 Ooops, looks like someone cut themself shaving in the shower.

Sunshine Cleaning is very much a testament to Amy Adam's charm.  Her Rose is not the brightest bulb, and she is insecure.  "Um, we come into people's lives when they have experienced something profound - and sad. And they've lost somebody, you know? And um, the circumstances, they're always different. But that's the same. And we help. In some small way we, um, we help."

She makes bad decisions, such as the affair with the married policeman.  "There's not a lot that I am good at. But I'm good at getting guys to want me. Not date me, or marry me, but want me. "  Yet through all of that I, like Scott, found myself liking her.  Adams has "It".

The movie plays like real life.  No one acts in some fantastic way.  They all have problems and issues that are rather common in life.  A family death, money problems, relationship issues are all relatable. Her visiting her son's school to hear bad news is something I can relate to.

With all the realism, I was a bit bored.  I also like Arkin, but the little quirky moments were not enough.  It ends on a happy note and some things get resolved, but I never felt invested enough to really care.  Adams is the only good thing about thismovie. 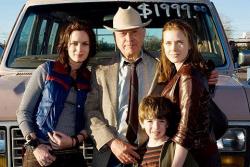 The Lorkowski bunch in Sunshine Cleaning.

We all agree Amy Adams is a wonderful actress. She's demonstrated her terrific range in a variety of roles and Rose Lorkowski is yet another feather in her cap. Like Scott wrote, Rose peaked early. She was one of those incredibly popular girls (or boys) to whom everything seems to come easily and effortlessly. But once they are out in the real world they find they lack many of the necessary survival skills. In direct contrast to her former cheerleader self, the adult Rose is socially awkward. It's also clear (as Eric suggested) that she didn't spend much time hitting the books in school as she seems a bit lacking in education. Her relationship with the married guy is the most visible symptom of the devastation her mother's suicide wrought in her life.

Emily Blunt may lack Adams' incredible versatility but she gives a tender, heartfelt performance as the more emotionally damaged younger sister Norah. Scott's right, she's less clearly defined as a character. The subplot involving her flirtation with lesbianism never really goes anywhere. But Blunt makes you care. She really knows how to use those large expressive eyes and full mouth. Her face is very open and Lillian Gish-like.

When Adams and Blunt share the screen they really capture the essence of the bond that binds siblings together.  Adams likewise easily evokes the mother/son relationship (Jason Spevack is a natural) as well as the adult daughter/aging father dynamic.  It's certainly true that Joe Lorkowski is the kind of role that Alan Arkin can knock out of the ballpark in his sleep.  And he does.

As a character study this short little movie works but the plot is none too fresh or original. Despite the inclusion of a few quirky details, the story is formulaic and the feel good ending expected. I can't say I was ever bored by this movie. With a run time of just 83 minutes it didn't stick around long enough for that. But it wasn't compelling enough to be a great drama nor funny enough to rate as a true comedy. In a word, despite the talented cast, Sunshine Cleaning left me feeling ambivalent.