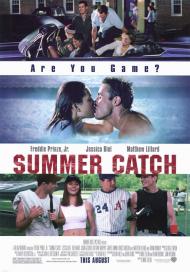 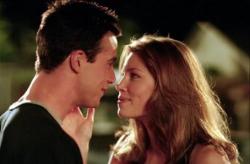 Many a time that I have watched a movie and thought, "I could have written a plot better than that." Summer catch is such a movie. With it's worn out cliches and a lack of any real spark, this movie looks more like a rough draft than a finished script.

How are these plot points for originality; A rich girl falls for a working class boy who has dreams of being a major league baseball player. The movie ends with a big important game. Working class boy is haunted by insecurities. This movie has not one original moment in it.

Ryan, the son of a lawn mower, is a great baseball pitcher who plays for a team on wealthy Cape Cod. He meets Tenley, the daughter of a rich man, and they fall in love. Ryan has family issues and insecurities about his ability to play. "If you want big rewards, you gotta take big risks." Tenley tells him. In fact, Ryan gets advice from everyone; his dad, his brother and his friends. How can he pitch a baseball game when he can't decide anything on his own.

The last scene is the biggest joke in the movie. Ryan is pitching a no hitter when he realizes in the 9th inning, all of a sudden, that he loves Tenley. So what does this guy do who is pitching his best game ever in front of professional scouts, that include Hank Aaron, who could potentially offer him a major league contract? He pulls in a reliever and runs off the field to catch her at the airport. The one time he makes a decision on his own and it is a bad one.

The most fascinating thing to be found in this movie is the cast. Almost every face is recognizable. Besides Prinze, Biel, Dennehy and Lilliard there is Brittany Murphy and Christian Kane from Just Married, Bruce Davison form X-Men, Fred Ward from Tremors, Wilmer Valderrama from That 70s Show, Marc Blucas from First Daughter, John C McGinley from Scrubs and Beverly De Angelo. Baseball greats Hank Aaron and Ken Griffey jr even do cameos.

I love baseball and movies but Summer Catch is not a good combination of the two.