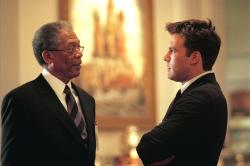 A few years ago I worked for two weeks in a movie theater for some extra money. One of the movies showing during that time was Clear and Present Danger. I remember as an usher standing in the back of the theater at the end of each movie waiting for the patrons to leave so I could clean up after them. Doing this forced me to watch the end of each movie over and over again. I must have seen the end of Clear and Present Danger more than twenty times and can therefore still quote almost verbatim the final scene between Harrison Ford's Jack Ryan and Donald Moffat's President Bennett. ("How dare you come in here and bark at me like some little junkyard dog! I am the President of the United States!") It was a great moment at the end of a really great movie. The best of the Jack Ryan series. The Sum of All Fears contains no such great moments and is a far weaker movie for it.

In this installment of the series based on the bestsellers by Tom Clancy, Ben Affleck confusingly, but ably, steps into the role first portrayed by Alec Baldwin in Red October and made more famous by Harrison Ford in Patriot Games and the aforementioned Clear and Present Danger. I say confusingly because the movie takes place after the last movie, yet Jack Ryan is now in his late twenties and has just joined the CIA and has just begun dating his future wife, the same wife that in the last movies he'd just had a baby boy with. It is therefore very difficult to see this movie as part of the series and makes me seriously wonder why they didn't set this movie twenty years ago, or simply name the character something else. Despite the change in ages, Ben Affleck is quite likeable and engaging and has a few cute moments trying to balance his career and his new love.

The movie begins with a prologue during the 7 days war between Israel and Egypt and Syria. During that brief conflict an Israeli jet carrying an atomic bomb is shot down. Flash forward twenty-nine years and the bomb has been uncovered by a father and son who concoct a plan to sell it to an arms dealer. Not realizing what it is they've discovered, they let it go for a mere $400. The arms dealer then turns around and sells it to a fascist group for $50 million.

Meanwhile, the Russian President has died. A new President has taken his place. Jack Ryan, a researcher for the CIA has recently written a paper on the man who has just assumed the Presidency. Ryan's superior, Bill Cabot (played wonderfully by Morgan Freeman), brings him along to brief a group of Senators on the new Russian President. Ryan ingratiates himself with Cabot and Cabot sends him to Russia to help monitor Russia's nuclear disarmament.

While Ryan is doing that, the fascist group in possession of the bomb has concocted a scheme to force Russia and America to go to war, thus allowing a Right-Wing Europe to rise up and become the next Super-power. This is one of the movie's weakest plot points. Just how this would mean members of this fascist group would come to power, is never explained, and indeed their motives apart from Hitler philosophizing, is never really satisfactorily gone into. They are terrorists and they want to commit terror is pretty much their motive.

Without giving too much detail, so as not to spoil the plot, tensions rise between the U.S. and Russia, the atomic bomb is planted in Baltimore, and Ryan with the help of CIA operative John Clark (played by Liev Schreiber), is hot on the trail of the missing bomb, and is determined to prove that it is not the Russians, but some other group who is behind the problems between the two countries.

Now any James Bond fan can tell you that this plot (terrorist group gets hold of nuclear bomb to force the world into doing its will) has been done a million times. It reminds me exactly of a line from Austin Powers: International Many of Mystery. Dr. Evil says, "Oh Hell, let's just do what we always do, steal a nuclear missile and hold the world hostage." Granted this is the most realistic version of this plot, but it does still ring of an old Bond movie. It even has the requisite, terrorist group kills one of its own members when they want out, moment.

However, my largest problem with this movie is that there are really two plots going on throughout it. There is Russia and America's escalating war and Ryan's pursuit of the missing bomb. Seemingly these two plots would culminate head-on at the end. This does and does not happen. It does, in that Ryan does uncover the truth, but doesn't in that the way the movie's ending is handled, it could just as easily been done without Ryan ever being in possession of this knowledge.

Apart from the predictable, over-used, plot, and disappointing ending, the movie does manage to entertain. It's not great entertainment, but there is tension, and at least one surprise which caught me completely off-guard. Were I working in that movie theater today however, I'd be volunteering to clean out Spider-man, and would leave this one for someone else; one viewing was quite enough. 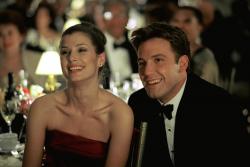 Bridget Moynahan and Ben Affleck in The Sum of All Fears.

So often I come across men a few years older than I am who have long hair. Not "hippy" long, but 80's long. Usually these are just guys who hit middle age and no longer care to keep up with a current look. My first thought is always "dude, it's not 1989. Cut your damn hair." This is what I was thinking when I watched The Sum Of All Fears. Okay folks, the cold war is over. Russia is just a big cold country fighting terrorists and dealing with its economy just like us. Even some plot devices in this movie were lifted from other Clancy plots. Guess what movie I am describing? Jack Ryan has once met and done a report on this Russian and therefore would really like to talk to him so as to avoid a nuclear war. Yes it could be The Sum Of All Fears or it could be The Hunt For Red October.

Tom Clancy was a great Cold War writer. Whereas Ian Fleming wrote about it so entertainingly at the beginning of it Clancy did it at the end. The big difference is that Ian Fleming created an interesting over the top character. Clancy's hero is supposedly this every day man who just happens to know everybody important and falls into situations where he has to save the world.

The Bond stories are often predictable and retreads of previous plots. However, James Bond is so obviously fantasy that it is entertainment as it is meant to be; fun and exciting.

Jack Ryan is such an attempt at a serious character that he conflicts with the extreme circumstances he always finds himself in. It worked up until this movie. Jack Ryan against the Russian submarine captain. It worked when he fought the Irish terrorist. It worked with the south American drug lords. It has gotten old. Either make this guy an all out secret agent or retire him. The gimmick of this guy stumbling into the role of action hero/world saver has grown very tired.

Now due to the events of 9/11 this movie suffers even more. In this movie it only takes 3 or 4 rogue Russians to be assassinated to make the world a bright cheery place for picnics. In real life we now know that it is not that simple. In the Cold War we knew who the enemy was. It is a different planet we live on today. The enemy hides and solutions are not so easily found. This movie, although it deals with a terrorist's explosion on American soil, seems quaint and dated. I do like Ben Affleck as Jack Ryan. He does the every day man routine very well. Ok, to be more specific , he does the every day good looking, intelligent, politically well connected everyday CIA man very well.

Had this movie taken place 20 years ago it would have made a whole lot more sense. Historically as well as the genealogy of the character's age and relationships. This is not a sequel to the other movies just as all of those James Bond movies are not sequels. However, James Bond never changed his age so dramatically. Nor did it ever kill off the same character twice, as these movies have done. Played by Morgan Freeman in this one and James Earl Jones in another.

This could have been a good movie 20 years ago. It has good acting, special effects and a decent pace. Its Russia versus USA theme is just not in style today. Tom Clancy novels desperately need a new haircut.

As my brothers noted, this Cold War plot was out of date in 2002 and its attempts at Fail Safe like tension in the final scenes failed. Ironically however, given Russia's military intervention in Ukraine over the past several years, the plot is now more relevant today than it was thirteen years ago when The Sum of All Fears first hit theaters. Unfortunately world affairs can't improve the quality of a movie.

Ben Affleck is my least favorite Jack Ryan (although Chris Pine comes in a close second) and this is my least favorite movie in the series. Affleck's likable enough and he looks the part. God he was young then. He still has baby fat on his chin. But his acting leaves much to be desired. Fortunately he has improved over time but here his inexperience shows. Although you could argue that this tentativeness works for the role, I didn't buy it.

There are a couple of decent scenes here. Liev Schreiber handles his few action sequences well enough and I agree that Morgan Freeman gives his usual wonderful performance. Alan Bates gets a few memorable moments as an over-the-top villain - except he's not over-the-top enough. I agree with Eric that the Jack Ryan formula is tired and its mix of attempted realism with the increasingly implausible situations Ryan finds himself in don't jibe.

Here's another bit of irony for you. In the Tom Clancy novel on which this movie was based the bad guys were Islamist terrorists rather than Neo-Nazi terrorists. Now here's the ironic part. This change wasn't made out of political correctness resulting after 9/11. The movie wrapped filming in June, 2001. According to the DVD commentary by director Phil Alden Robinson, he made these changes because he didn't think that Arab terrorists could accomplish all that was necessary to make the plot work. But, as Scott pointed out, this plot is so ridiculous that no terrorist organization could make it seem plausible.

The Sum of All Fears doesn't add up.