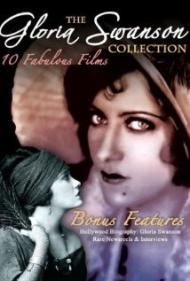 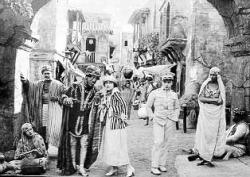 Gloria Swanson and Bobby Vernon made a series of nine, two reelers together in 1916-1917.  The Sultan's Wife is their last, as well as the final Keystone film.  The film was started while Mack Sennett was still in charge but not released until after his departure, to start a new studio.  It was truly the end of an era.  The Keystone studio was responsible for the careers of many silent stars.

Gloria and Bobby are young lovers yachting in India with his family.  His father does not approve of him marrying Gloria, so the couple plan to elope as soon as their boat docks.  Once in town, they meet a Raja who of course has eyes for Gloria.  He invites them both to his palace.  Gloria has to stay, while Bobby gets sent packing.

The Raja marries every good looking woman in town, upsetting all the local bachelors, who are left with hags.   They decide to assassinate him.  Meanwhile, Bobby sneaks back into the palace where he and Gloria change clothes.  In drag, Gloria is believed to be a guy and sent to have her head cut off, while Bobby, in drag, has to dance for the Raja, making the Raja all giddy and sweaty.  As in their earlier film, their dog Teddy comes to the rescue.

The harem is briefly shown wearing bathing suits, which must have been daring for the time.  The strong willed Gloria refuses to wear one.  The funniest, and most suggestive, scene is when Bobby is standing directly against Gloria, while hiding behind a tapestry.  A guard shoves a spear through the tapestry into Bobby's butt, causing him to thrust forward into Gloria's rear end.  They both make similar faces.

The end is a manic scurry of people as the dissatisfied bachelors attack, and Bobby's family and sailors come looking for them.   Some silent films could pack a lot into such little time.   The story seems old, and for God's sake it is.  However, like all of the Bobby/Gloria shorts that I have seen so far, they keep the pace moving briskly along, so you are never bored. 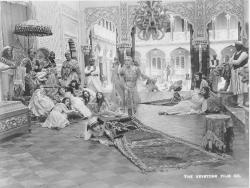 Gloria Swanson, under the carpet, and Bobby Vernon, dancing in drag in The Sultan's Wife.

For a two-reeler from 1917 The Sultan’s Wife has high production values with impressive looking sets and dozens of elaborately costumed extras. The plot is a forerunner to those Hope/Crosby Road Pictures with Swanson pulling double duty in the Bing Crosby and Dorothy Lamour roles.

The tiny photogenic Swanson and the equally diminutive, baby-faced Vernon made a good team. Gloria Swanson was a nimble physical comic. If DeMille hadn’t begun casting her in battle-of-the-sex’s bedroom dramas she might have had a successful career as a silent comedienne.

There are several amusing sight gags in this fast-paced action comedy. The harem girls in bathing suits, punching the time clock is funny and titillating. The sight of the executioner proudly instructing his tiny son in the art of beheading with a scimitar is worth a chuckle or two; as is the monkey riding along on Teddy’s back.

Several title cards made me laugh. Upon arriving in the exotic foreign country it reads: “In India; the land of elephants and little clothes.” When a harem girl dances up to Bobby and he attempts to shimmy along, the alliterative but spell-challenged title card says: “Not the ‘Hicky Hoola’ - merely the Hindoo Hop.”

But make no mistake. It is the presence of the gloriously alluring Swanson for which the movie is remembered. One very positive thing to come from the internet is the fact that these silent two-reelers are now being seen by more people than at any time since their initial run in theatres nearly a century ago. 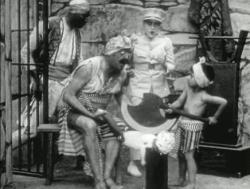 Executioner's and Sons for all your beheading needs.

Now this is a charming and amusing silent short. It's not really a laugh-out-loud comedy, but it has a sense of fun that is fast paced and likable. While Swanson is of course much more well known today than Vernon, this short works because the two of them play well off of each other. It's easy to see why they made so many shorts together.

Gloria Swanson was right around 5 feet tall and Vernon was only 5' 2". This makes their clothes swapping more believable and also makes them look almost like children when they're running around the Rajah's palace. It adds to their sense of innocence. One of their best moments together comes when Bobby thrusts the engagement ring onto Gloria's finger in a very possessive and haughty manner.

Like you Patrick I was impressed by the sets and the costumes. They are quite elaborate, especially for just a short. I wonder if they were made for another, bigger film and the maker's of this short simply took advantage of them.

I also agree with you Patrick that Swanson could have continued her career in comedy as she has a real flair for it. Her acting, in fact all the acting, is quite smooth and natural, with perhaps only the Rajah hamming it up, but in a way that supports the character, if not in a very flattering way to Indians.

As you say Eric, the pace is so brisk and the cast so likable that there's never time enough or reason to get bored.