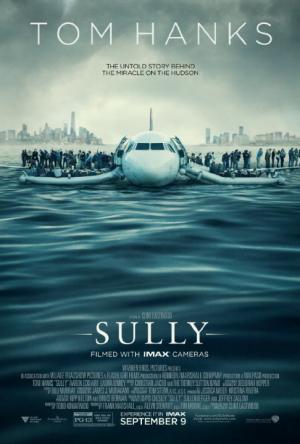 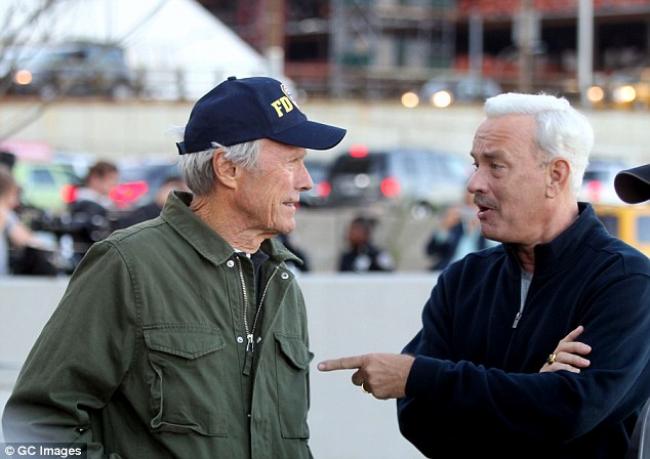 There are a couple of problems with trying to make a movie about the Miracle on the Hudson. Everyone already knows the outcome so what generates the tension? And, since Sully is universally regarded as a hero, what is the source of the dramatic conflict? Writer Todd Komarnicki and director Clint Eastwood are able to surmount these problems to varying degrees, thanks in large part to another fine performance by the film's star, Tom Hanks, but also by the editing and direction of the film, which keeps things moving along in an interesting and quick paced manner.

I'm sure most people still remember the story, but in 2009, an airliner out of LaGuardia airport in New York City, flew through a flock of geese just after takeoff, causing both engines to fail. With no other options, Pilot Sullenberger, forever known as Sully, managed to land the plane on the Hudson river, saving all 155 passengers and crew who were on board the plane. Although the entire incident only lasted 208 seconds, and we know everyone survives, Eastwood and company manage to keep the scene suspenseful and also to make it last, by weaving it into the movie via several flashbacks. It's very well shot and acted by Hanks and his co-pilot played by Aaron Eckhart. Despite some weak CGI of the plane actually landing in the Hudson, it feels very real and that sequence alone is worth the price of a movie ticket.

The rest of the film deals with the investigation of the incident and the immediate aftermath as Sully, a quiet, decent, family man, must suddenly come to grips with being a celebrity. And this is the part where Hollywood creeps into the film. Every movie needs a bad guy so here the script turns the members of the National Transportation Safety Board into the villains. Instead of just investigating the incident, they're on a witch-hunt to prove it was Sully's fault. There's talk about how the insurance companies are upset about the cost of the plane and the airline not being happy, but it's all made up for the film and it's never very convincing. The real NTSB investigators have objected to their portrayal in the film and very early on in the filmmaking process, they asked that their names not be used in the script.

While the villains are cardboard stereotypes, Hanks manages to make Sully feel very real. We learn via a couple of flashbacks how Sully has been flying almost literally his entire life. His questioning of his own actions and pondering if he made the right call are much more effective than the NTSB investigators' questions. As he puts it in the film, he's been flying for 40 years, but his entire career will now be judged by 208 seconds. Laura Linney plays Sully's wife and while she and Hanks never share the screen together, their phone calls are the heart of the film, since they give Sully the chance to express his doubts to someone, while still appearing heroic to the world.

The fear of being in a plane crash is universal to anyone who has ever flown. Whenever any of us fly, we're putting ourselves in the hands of the two pilots in that cockpit. It's what makes Sully such a hero, both in real life and in this movie. We want to believe that those pilots will behave as he did. That they will be able to bring us all down safely. We're so used to hearing about airplane tragedies that an event like this really does feel like a miracle. And this movie, despite its few minor weaknesses, manages to capture that feeling nicely. 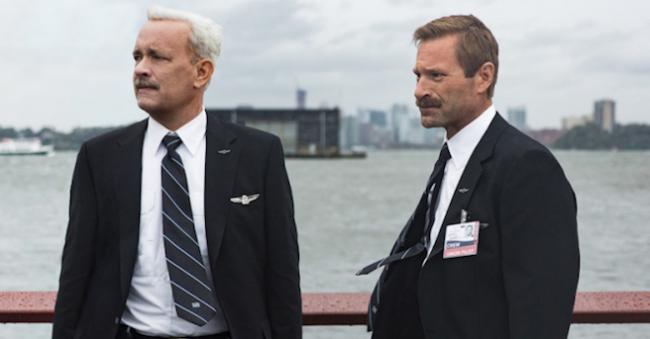 The NTSB investigators reminded me of a quote from Gary J. Byrne's book "Crisis of Character", where he wrote that people who second guess and question decisions others had to make in a split second as, "...cowards work." What I found even more bothersome about them was that I never understood what their end game was. What difference is there to the owners of the plane or the insurance company if a simulation showed a different result? The insurance company will still pay up and the owners will definitely keep employing Sully. The only thing the hearings seem to be working to accomplish is to discredit Sully as a hero. As this movie only lasts an hour and a half, I wonder if they were not added to pad the story.

The scenes of the crash and the rescue of the passengers are very tense and emotional. I heard audible gasps from other audience members throughout the many times the crash scenes were shown. I, meanwhile, found myself struggling to breath due to the lump in my throat. I cringed when someone fell in the cold water and was willing that ferry boat to move faster to get to the crash site. I was very engaged in those scenes, even though the outcome is well known fact.

My wife and I recently stayed in a New Jersey hotel that over looks the Hudson river. Every day we took a ferry across to Manhattan, going near to where the plane had crashed and floated. This was our second trip to New York, with our first being a year after 9/11. I bring this up because this is the angle the movie should have used instead of the NTSB investigators. We briefly hear that the miracle on the Hudson was some needed good news after the twin towers attack but that should have been played up so much more.

If you have any sense of decency about you, 9/11 was a devastating blow to the human spirit, especially if you are an American and even more so if you are a New Yorker. Eastwood shows us some clips of people who witness Sully's plane flying extremely low over New York. What were they thinking and how many of them needed a change of pants because of it? Was New York about to experience another catastrophe? Although this bird dropped into a river, the fact that all survived is akin to the phoenix rising from ashes. Sully was immediately put on a pedestal and New York and America had a new hero to look to. New York, which suffered such an overwhelming loss now had a victory to brag about. Under any circumstances, Sully would have received praised for the landing but I wonder how much more zealous everyone has been because it happened in New York after 9/11?

As Scott wrote, there is plenty of tension with Sully dealing with his new found fame. We never needed the hearings. Instead of those idiots we should have witnessed Sully embrace his wife upon his return home. We should have been shown the phone call Jeff made to his loved ones and how they reacted. I know this is called "Sully" but we should have seen a glimpse into Jeff's and maybe the stewardesses private life. Without the hearings we could have also been shown more of the passengers experiences.

Sully could have used some reworking. The hearings took me out of the story as I kept thinking, "So what?" to any and every point the investigators made. However, the moments that work, really work. I was emotionally invested and concerned through all the scenes surrounding the crash and rescue. The survival of these 155 people certainly lifted my spirits.