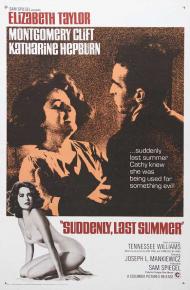 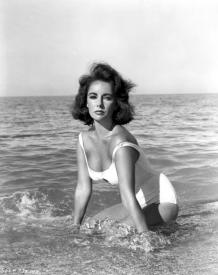 Tennessee Williams wasn't exactly known for writing lighthearted plays and Suddenly, Last Summer is probably the darkest of them all. Insanity and cannibalism being its main themes. The story is over-the-top and melodramatic and it paints an incredibly depressing and destructive picture of homosexuality. Considering that Williams was a gay man from the south living in the time that he did it is perhaps understandable that the character of Sebastian Venable is portrayed as such a selfish monster.

The talent involved here is amazing. The screenplay was written by Gore Vidal and Williams from his play. The legendary Joseph L. Mankiewicz directed it and the cast boasts Elizabeth Taylor, Katharine Hepburn, Montgomery Clift and Mercedes McCambridge. Taylor and Hepburn both give brilliant performances and seem to be trying their best to upstage each other. Clift, in the much less showy role, merely reacts in a mild mannered voice to the histrionics of the two female stars.

The story concerns the aftermath of the death of Sebastian Venable, a gay man from a wealthy southern family. He is never shown except in the final flashback and even then we never see his face. His mother Violet is in denial about his homosexuality as well as the gruesome manner in which her son died. His cousin Catherine is the only one who knows the whole truth but she has suffered a nervous breakdown and now the ruthless Violet wants to shut her up permanently by way of a lobotomy. Clift plays the surgeon being pressured into performing the operation in order to secure a large donation for a new hospital wing from Mrs. Venable.

As with all of Tennessee Williams' plays it is the characters and their dialogue that shines. He was truly the American Oscar Wilde. Mrs. Venable is a classic persona, her entrance and exit on her elevator are great moments. She describes her time with Sebastian in this way. "We would carve each day like a piece of sculpture, leaving behind us a trail of days like a gallery of sculptures... until suddenly, last summer." Catherine, though a bit less defined, says things like, "Is that what love is? Using people? And maybe that's what hate is - not being able to use people."

The most iconic moment from the movie is Elizabeth Taylor in that tight bathing suit on the beach. Her voluptuous breasts heaving, and then her primal scream when she sees Sebastian's body.

The problems with the movie are its lack of plot and its staginess. The story doesn't really allow for it to be opened up for the screen. The opening scene between Clift and Hepburn and the final scene in Sebastian's garden are the only truly great scenes in the movie. The rest of it is trite melodrama. The ending, however, remains one of the most disturbing and bizarre moments in 50's cinema.

I agree with Patrick that the film is book ended by some great scenes. The first scene in the garden is Katharine Hepburn expertly and passionately seducing Montgomery Clift into doing her bidding. Apt that it is set in a garden, with Violet playing the role of the snake and Dr. Cukrowicz as Eve. The film is filled with sympolism. The elevator Mrs. Venable arrives and departs in is quite the gilded cage and her name sounds awfully like "venerable."

We learn here that Violet and her son were extremely close. “We were a famous couple.” Violet smiles proudly, recalling how people stared at them at events. They dated and enjoyed the attention. Although incest is never inferred, Violet clearly loved her son in a way that should be reserved for a spouse or lover. Violet laments to Dr. Cukrowicz, “Lose your husband and you are a widow. Lose your only son and you are…nothing.”

Then we get the scenes of Elizabeth Taylor acting up a storm with Clift. Catherine is emotional and angry. She smokes and seems quite hardened by her life’s experiences. Everyone is threatening to lobotomize her. All she has to do is tell Dr. Cukrowicz the truth of what she saw and she will be released. As this is a drama, based on a play, we have to wait far too long to hear the story and see her in that plunging bathing suit.

As was common with Tennessee Williams, he incorporated aspects from his own life into his work. In real life, Williams' sister Rose was forced by their mother to have a lobotomy. How barbaric was our medical establishment as it learned to heal humanity. Interesting that the doctors in this film think it is a legitimate medical treatment while Violet wants it performed as she knows it will mentally incapacitate Catherine.

Elizabeth Taylor is beautiful in this film. Her figure is thin yet very curvaceous. As this was made in 1959, it was one of the last films she made that I would consider her hot. She looks good and does a decent job acting up but her accent comes and goes. For my money, Hepburn steals the film. She spends much of the movie playing two emotions at once. She tells everyone what she wants them to know as she pushes her personal agenda.

Also because this was made in 1959, any reference to homosexuality had to be left out. At one point Dr. Cukrowicz asks Violet about Sebastian’s personal life and Violet tells him that, “He was chaste.” Yeah, right. A bit later Catherine yells to Dr. Cukrowicz  and Violet that, “He used us as bait.” and “We procured for him.” You get the picture without ever having it explained. I did not understand how Catherine attracting straight men benefited her homosexual friend but then we hear of one of Catherine’s dreams where she is, “Getting raped by a man with Dueling pistols.” Think about it.

The final scene where everything is explained is long time in coming, making much of what came before seem like filler. Suddenly, Last Summer was a one act play. Gore Vidal added scenes for this film adaptation that were not needed. Hepburn glaring at Taylor as she tells the truth of last summer at the films end is one of the films best moments. Hepburn spits venom as Taylor speaks under the influence of a "truth" serum. Then we get the flashback that Patrick so accurately called, “one of the most disturbing and bizarre moments in 50's cinema.”

I wonder if a more frank contemporary version of Suddenly, Last Summer would be any better. It would not have to shy from the subject but how could you possibly match this cast.