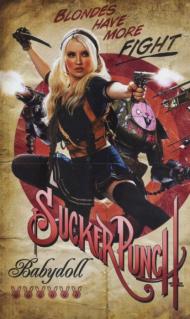 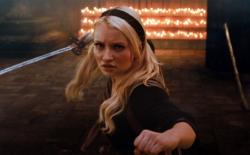 Eye candy like Sucker Punch is all very well as far as it goes, but eye candy alone can't sustain a movie, not even one with a thumping soundtrack filled with covers of classic rocks songs and featuring a cast of scantily clad, hot young women. What it lacks is a well written script with any kind of depth or character development. Certain scenes are well shot and wow inducing, but I never cared all that much about the interchangeable characters.

Emily Browning stars as Baby Doll. The movie opens with the death of her rich mother, leaving Baby and her younger sister alone with their evil stepfather who is angry about the two girls being left all of his dead wife's money rather than him. An altercation in this opening prologue leaves Baby's younger sister dead and Baby is sent to an insane asylum as a result where her stepfather arranges to have her given a lobotomy in five days. This sets up a countdown for Baby to arrange for an escape before it's too late.

The plot doesn't play out quite that simply however. Baby retreats into her own mind rather than face the stark reality of the asylum and the death of her mother and sister. In her mind, she and the other institutionalized girls are courtesans in a night club, trapped in their profession and forced to dance for and sleep with men.

Baby convinces four other girls to escape with her. She's given a vision featuring a wise man (her guardian angel?) played by a leather faced Scott Glenn. He informs her that she'll need a map, a knife, fire, a key and something else before she can escape. Each scene where Baby and the girls acquire one of the items is filmed as a fantasy battle in some of the movies best sequences.

The fantasy sequences really are the movie's best moments.  Visually they are stunning and look like a graphic novel come to life. Unfortunately, they're really the only thing the movie has going for it. It's almost as if a movie was built around the action sequences rather than the action sequences serving the story. They're enjoyable as shorts stuck in a larger film, and with the enjoyable soundtrack, they make rather nice music videos but they don't add up to a cohesive story.

There might be some talented actresses in these parts, but we are never given a chance to find out as their only real purpose is to look sexy and kick ass. Although given the movie's propensity to make the girls look as young as possible while still trying to make them look sexy, it almost comes across as creepy. There's one moment that feels stuck into the film for this very reason that makes plain that Baby Doll's age is 20. I really wonder if that was included to try and avoid complaints that the filmmakers are trying to make underage girls look sexy.

If you turn off your mind and try not to think at all, you can enjoy the action. If you think too much or search for any depth however, you'll end up disappointed. 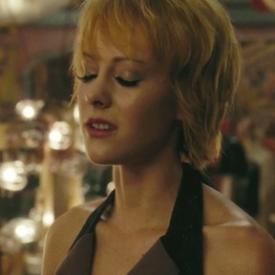 Jena Malone gives it her all at least.

Yeah, Sucker Punch is all style and little substance. Visually it grabs your attention right from the start. It conjures up an interesting mix of classic Hollywood images and clichés beginning with the evil step-dad and the innocent (albeit highly sexualized) orphaned waif.

The establishing shot of the mental institution is right out of any number of 1940s films noir. Picture this. Ornate iron gates opening onto a high sloping hill atop which sits an enormous gothic mansion with spires and turrets. Do I need to mention the pouring rain and flashes of lightning? If only the dialogue were as snappy and memorable as scripts from that era.

I agree with Scott that the fantasy sequences dominate the movie, providing its highlights as well as seeming to be the entire reason for Sucker Punch being made. I would complain about the anachronism of the music Baby Doll dances to, it is startlingly modern compared to the look of the rest of the movie, but since they all take place in Baby Doll’s mind it doesn’t matter anyway.

The hyper-violent fantasy battles are cool. They range from a Kill Bill inspired martial arts setting, to a WWI battlefield, a fight with a dragon, and an explosives laden elevated train racing towards a futuristic city. Well over a decade after its release, The Matrix is still influencing action scenes. The famous “bullet time” slow motion technique gets used for what must be at least the 1,000th time. There are many shots of Baby Doll in a crouching pose, one hand on the ground and a tuff look on her face.

The acting is all broad caricature except for an unexpectedly dramatic moment between sisters Rocket and Sweet Pea. Jena Malone, out of nowhere, suddenly seems to be going for the Oscar when she tells Sweet Pea, “Tell mom I love her.” I give her credit for trying but it is far too little and much too late in the picture to bring any real emotional depth to this soulless video game. 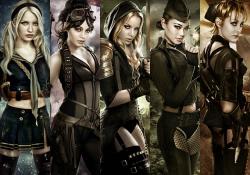 The girls of Sucker Punch.

The special effects are a cover for a film that actually has very little plot.  The asshole step father never gets what he has coming.  The film makers clearly have a school girl fantasy going on.  Emily Browning is made up to look like Holly from The Girls Next Door, by way of a sexy Catholic school girl uniform. But it is all tease.  We never even get to see her supposedly too sexy to believe dance.  Sucker Punch has far too little plot and not enough "T" and "A".