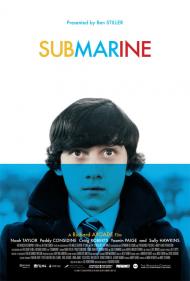 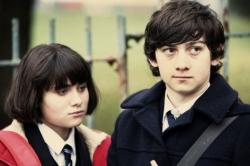 Submarine is a self-consciously quirky coming of age story. Writer and director Richard Aoyade - best known for his comedy work on such shows as The IT Crowd and The Mighty Boosh - makes his feature film debut and seems to be doing his best to channel early Wes Anderson. It's an amusing film that has a layer of sweetness running just below its off-kilter facade.

Oliver is a teenage boy in Wales who hasn't figured out where he fits in yet. Like most teenagers he's a bit self-obsessed and has tried on a number of personas, but still remains on the fringe of life at his school. The plot, what there is of it, roughly covers one school year. He develops a girlfriend in the person of fellow outsider, Jordana, who he loses his virginity to. Trouble develops in his own house when his parents go through some marital difficulty that's exasperated by his father's depression and the presence of an old flame of his mother's moving in next door. Jordana keeps Oliver at a distance, but eventually drops her defenses, admitting to him that her mother has a brain tumor and might die. While those events might sound sad - and they are - the way the story is told, with its quirky humor, keeps things from getting depressing.

One of the things that I liked is the way that Oliver is flawed. He's not the perfect, but misunderstood teen, but has more depth than that. To first impress Jordana he participates in teasing a girl in their school with whom he used to be friends. When he learns about Jordana's mother's illness, he doesn't react well, being more concerned with his own problems than hers, he avoids going to the hospital on the day her mother is due for surgery. It's these flaws that make him seem more real rather than any kind of ideal.

The cast is great. Craig Roberts and Yasmin Paige do terrific work as Oliver and Jordana. This is a British film so things are kept fairly low key. Emotions are much less overt than they would be in an American film, but you can see it nonetheless. The supporting cast, while small, is equally good. Sally Hawkins plays Oliver's mum and Paddy Considine provides some comedy as the broadly drawn new-agey ex-flame of his mum's.

The quirkiness is present in the use of title cards and Oliver's narration. Often Oliver is very self aware of his own life as if narrating a movie about his own life story. He'll mention that if his life were a movie the camera would pull back and up into an aerial shot, for instance, and of course that's just what the camera does. Most of the laughs come from this narration where Oliver can comment comically on the more serious events shown on-screen.

The coming-of-age story is one of the oldest in the world. Submarine is a nice addition to the genre. I look forward to Richard Aoyade's next film. 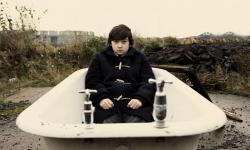 Richard Ayoade adapted the screenplay for Submarine from the 2008 novel by Joe Dunthorne. It accurately captures that feeling of isolation so common in adolescence. Oliver Tate is a boy caught at that awkward stage between childhood and manhood. Submarine doesn't exactly beat a new path in the much trampled ground of the coming-of-age story but it does offer an honest, touching, and often amusing hike through the experience.

I agree the cast is terrific. Both the young stars are completely believable as two teenagers exploring the mysteries of life together. Their realistic behavior, character flaws and all, juxtaposes nicely with the theatrically structured arc of the story. It is told in three narrated acts sandwiched between a prologue and epilogue.

Oliver's father is an introverted bookish type who's prone to depression. Oliver never states it but he clearly worries about turning out like his dad. In one humorously awkward moment his father gives Oliver some unsolicited advice on romance, “Listen, look, I know you think I'm very boring, you know... but once I ripped my vest off in front of a woman, and err... it was very effective actually. It produced a very atavistic response.” As soon as his father leaves the room Oliver looks up atavistic in the dictionary and later uses it to describe his budding physical relationship with Jordana.

Oliver has rather eclectic, and mature for his age, tastes. Like Alvy Singer dragging Annie Hall to The Sorrow and the Pity, he takes Jordan to see Carl Theodor Dreyer's 1928 epic The Passion of Joan of Arc. Not surprisingly they leave in the middle of the movie as she complains about the lack of sound, while Oliver tries to explain that it's a silent picture.

Submarine (the title refers to a depressed, isolated feeling of being underwater) is a well-made feature film debut (see if you can spot his clever use of color). Like Scott, I look forward to Richard Ayoade's future work as a filmmaker. His adaptation of Dostoyevsky's novella The Double opens this May (2014) and features several of the same cast members.

As my brothers wrote, Oliver Tate is a flawed character, which, of course, makes him all the more realistic. His teasing of the girl who ends up in the puddle is typical of many teenagers. He is not doing it to be mean to the girl in question but to impress the others involved in doing the teasing. How many of us have not been there?

Essentially, all teenagers are the same. They all have problems relevant to them and their situation but most boil down to fitting in, finding their place and learning to make decisions as their world is becoming larger and larger. It is how they choose to deal with said concerns that makes them at all different.

Where I found Oliver unique is with his fascination with his parents. “My mother is worried I have mental problems. I found a book about teenage paranoid delusions during a routine search of my parents' bedroom.” He even keeps track of how often they have sex. Yeah, that sounds creepy. He even sends his mother a note, pretending it is from his dad, which suggests they have sex.

Oliver and Jordana become a couple and enjoy each other’s company, but in the grand scheme of things, she is nothing more than a living, breathy life lesson. Oliver’s father recognizes this, as unromantic as that is, and supplies his son with a mixed tape of love songs but also includes some break up songs in preparation for the inevitable.

Submarine works best as a comedy and unfortunately the laughs quotient goes down as the film moves along. As Scott noted, the drama is toned down and the romance is barely relevant. Patrick mentioned the scene where Oliver takes Jordana to a movie she does not want to see. He also gives her books she does not want to read. “Well, you know, I thought it would be nice to get some mutual interests, now that we've had sex, other than spitting and setting things on fire.” They are not meant for each other as much as they are simply available for each other.

Submarine is an honest, and often hilarious, look at teen angst. At one point, a random student walks by Oliver and says of his relationship with Jordana, "You gotta shut that shit down. Its fucking ridiculous." Oliver is not the boy next door or the rebel without a cause. He is just a young man trying to figure it all out. He stumbles and gets back up. He is scared one minute and brave the next. There is something in Oliver that all men can relate to.

As a last comment, I must address Oliver’s note at the beginning of the film where he thanks America for not attacking Wales. Why on earth would we want such a place? You have to wear jackets to the beach. The people think someone spouting lines like, "I think light is the most important gift we have from the universe...We don't want to be in the dark, being fiddled with. I am a prism, I am lucid. I am delicious." Is somehow meaningful. The women are fickle. The men are impervious to pain and worst of all is that they use the word, “atavistic.”