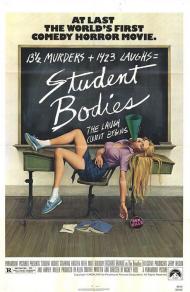 15 years before Scream and  nearly 20 years before Scary Movie, there was Student Bodies. Released in 1981, it capitalized on the then popular slasher films exemplified by Halloween and Friday the 13th. Clearly a b-movie with sophomoric humor, it actually does a fairly good job of skewering its target with admittedly very lowbrow comedy.

The movie opens with a caption that reads, "This motion picture is based on an actual event. Last year 26 horror films were released...None of them lost money." It then cuts to an ordinary suburban house with music reminiscent of the Halloween theme and are told by another caption that the date is in fact Halloween. The scene then fades out and back in and we are told that it is now Friday the 13th and then finally that it is Jamie Lee Curtis' birthday and that's when the movie properly begins.

As all good slasher movies do, this one begins with a high school girl babysitting on her own. The phone rings repeatedly, with a heavy breather on the other line. Eventually the girl's boyfriend comes over and they start to have sex, which as every watcher of these types of movies knows, means certain death. From there the story follows the usual path as more teenagers get killed and the heroine of the story (who is the virginal brunette) must try and escape from the killer's clutches.

Much as Scream would be years later, this movie is very self aware. It keeps a running body count on the screen whenever someone is killed. It also points out obvious slasher film tropes such as when a door is left unlocked. About halfway through the film it cuts to a man sitting at a desk who speaks directly to camera, explaining, "Ladies and gentlemen, in order to achieve an "R" rating today, a motion picture must contain full frontal nudity, graphic violence, or an explicit reference to the sex act. Since this film has none of those, and since research has proven that R-rated films are by far the most popular with the moviegoing public, the producers of this motion picture have asked me to take this opportunity to say 'Fuck you.'"

Not all of the humor works. Some of it relies merely on shock value and quite a lot of it is just dumb, but there are some very funny parts and lines as well. The line I laughed hardest at is when the killer, who is known as "The Breather", phones a group of people gathered in the principal's office and tells the woman who answers, that "I'm gonna kill next at the football game. Click." The woman asks, "Did you hang up?" and the Breather responds, "No, I just said 'Click'" When Toby, the good girl, is talking to her psychiatrist, he asks her about sex and she tells him that her mother used to tell her that "Sex was dirty and disgusting. At least when I have it with your father. With everyone else, it's great." The Breather is worth a few laughs as well as he often complains out loud about stereotypes he's forced to endure, such as climbing so many stairs and wearing galoshes. "It's the galoshes. They're a dead giveaway. Why do I wear them? It isn't even raining!"

Much like the Scary Movie series of movies, this one tries to throw as many jokes as possible at the screen in the hopes that enough of them will stick. It's a close ratio, but enough of them did make me laugh as to make it worthwhile. Just be aware if you do watch it that you will end up groaning almost as many times as you laugh.

The cast is made up of unknowns. They do a decent enough job although some of the minor roles come across a bit amateurishly. The most memorable castmember is Malvert the Janitor who is credited as simply being played by The Stick. Once you see him you will have no question as to how he got the name. He is one of the most bizarre looking human beings I've ever seen, with arms twice as long and skinny as any human has a right to be.

Although not as polished or scary as Scream or Scary Movie, you can see echoes of this movie in both of them. It's rough around the edges, but any fan of horror movies will want to check out this long forgotten by all but a few comedy, horror film.

Malvert the Janitor brings his date to the football game in Student Bodies.

Student Bodies was certainly groundbreaking as a horror movie spoof. Although it failed to find an audience upon its initial release it did develop somewhat of a cult following from many television airings during the 1980s. The fact that it doesn't include nudity, sex or swearing made it perfect for the boob tube. All they had to do was edit the one scene Scott mentioned with the vulgar message from the producers. While it's not nearly as funny, Student Bodies is clearly the prototype for the Scary Movie franchise.

As Scott said, not all of the humor works. I'd place it around the 30% mark. For every cleverly induced chuckle there are at least two clunkers. I laughed when the naked guy gets into bed with his just murdered girlfriend. He doesn't yet realize she's dead so he utters this classic line, “Julie, you're not responding to my maleness.” But for every genuine laugh you have to sit through bad writing of the likes of the following phone conversation...

Ms. Van Dyke: What makes your voice sound so funny?

The Breather: I'm disguising it.

The Breather: By talking through a rubber chicken.

Ms. Van Dyke: I thought it sounded like you were speaking through a rubber chicken. (groan)

The cast of unknowns are game but as Scott said it's a pretty amateurish bunch. For the most part the teachers fare better than the students and I agree that the janitor is one of the oddest looking people I've ever seen. Picture a mentally imbalanced Ichabod Crane (see photo). In one scene the entire school is in the gymnasium, being held as suspects. The students are dismissed in odd groups that are meant to be funny. When only the janitor remains in the bleachers the announcer says that all those whose parents are of the same sex can now leave. This may have passed as a joke in 1981 but given societal changes over the past 30 years it has lost whatever humor it ever contained.

My favorite part was the ending where (after several false endings) we learn it was all a dream. Toby wakes up and, like Dorothy, discovers that the people around her aren't who they were in her nightmare. In fact they are opposites. The female secretary is really a man, the athletic shop teacher now teaches French, the local ROTC cadet is really a hippie (another joke that hasn't aged well) and the spindly janitor is really a sophisticate. When told by Toby that he was the school janitor in her dream he gets offended and replies, “How absurd!”

Student Bodies has a few clever ideas but not enough for me to recommend it. It's worth noting that for nearly all of the main stars this would be their one and only movie appearance. 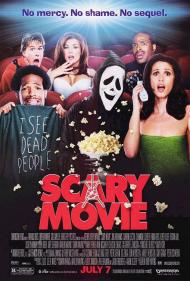