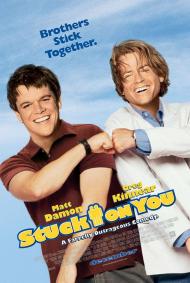 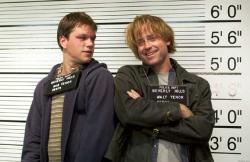 Matt Damon and Greg Kinnear in Stuck On You.

Stuck on You is an over the top, politically correct comedy. That is to say, it is a comedy that is not nearly as funny as it should be.

Damon and Kinear play conjoined twins, Bob and Walt. "We're not Siamese. We're Americans!" Bob clarifies at one point. They live on Martha's Vineyard and are local celebrities. Together they have played sports, ran a diner, seduced women and acted on stage. Walt has sex with a woman at one point as Bob lies next to him checking his email. A curtain separates them.

This movie treats conjoined twins are just normal people without any unique problems. That is until the brothers go to Hollywood so Walt can be an actor and Bob can meet his "e-mail" girlfriend, who doesn't know he is one half of two people. Walt gets an acting job right away. Bob tries to hide his brother's attachment from his girlfriend, but eventually she finds out and is, of course, very accepting.

The very best part of this movie is Cher. To get out of a contract to do a television show that she says, "... makes Touched by an Angel look like Trainspotting." she hires Walt as her costar. However, the show becomes a hit and she is stuck.

Separating the brothers contradicts the entire premise that the rest of the movie had set up. If the world is so accepting and life is so good for these people, why separate? The politically correct message being crammed down the audience's throat most of the movie is that we all can do whatever we set our minds to no matter what our handicap. Then the handicap gets removed and Walt's show gets cancelled. The conjoined twin's gimmick was the selling point for the television show. It is likewise the selling point for this movie. Once they become separated, the only mood left in the film is that they miss each other. They are more successful together than apart. Ooooooh, awe.

Stuck on You has a few good lines. Cher plays up her media image to the hilt. The problem is that damn few people in this world can actually relate to Walt and Bob's situation. The Farrelly brothers make light of it, but little else. The final scene has them working at their restaurant, attached with a giant belt, much like they were before the surgery. So, what is the final message? To separate or not to separate? I have no opinion or affection for either answer. 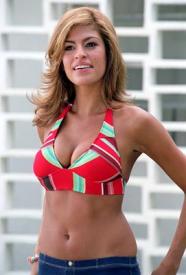 Eva Mendes in Stuck on You.

I'm almost embarrassed to say how much I enjoyed this movie. I watched it expecting a conjoined Dumb and Dumber, but was surprised to discover that it is actually far better than that. It's not a perfect movie by any means, but it is much better than I expected.

This is the only Farrelly brothers' comedy that actually has heart. Eric complains that this movie isn't as funny as it should be, but I say that it's exactly as funny as it wants to be. It's still Farrelly brothers' humor, but they've taken it down a notch or two this time around. If they had been running in full-out gross mode, one can only imagine the toilet jokes that would have been used.

Eric is right when he says that this movie oversimplifies the difficulties that actual conjoined twins would face, but this isn't a serious treatise on what it's like to be a conjoined twin. It's only a light-hearted look at the subject. And in the world of this movie, if Bob and Walt are accepted more easily than they would be in real life, I for one am prepared to accept it without criticism. I'm not looking for reality; this isn't that sort of movie.

As for the final message, I'd say it's fairly obvious. To really succeed in life you need to stand on your own two feet, but it never hurts to have someone you can lean on for support.