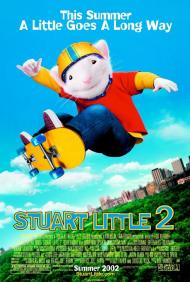 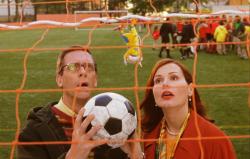 In Stuart Little we were introduced to the Little family. They are an impossibly sweet group who live in an impossibly nice house directly across from Central Park. They adopt a mouse, Stuart, so their son will have a playmate. Much of this movie is devoted to Stuart just settling in to his new brood. In Stuart Little 2 the pace is quicker since all the intros were done in the first movie.

Stuart, Michael J. Fox, is now having some growing pains, or lack thereof pain. His older brother, George (Jonathan Lipnicki) has a new best friend. Stuart tries to keep up with him. But as demonstrated by the soccer game, it is evident that Stuart needs a friend his own size. Before Stuart gets too filled with angst, a sparrow falls right into his lap, well actually it falls in the passenger side of his car. The bird, voiced by Melanie Griffith, appears helpless and in need. However, she is actually working for a thieving falcon, voiced by James Woods.

Much of the film's tension and excitement derives from the falcon's threats and chases. The final third of the movie had most children in the theater cheering and laughing as Stuart and the falcon do battle. Even Snowbell, the family cat, voiced by Nathan Lane, gets into the action and has some of the funniest lines.

The wonderful message of the original movie, accepting someone for what is in their heart and not how they look, is still very present here. If anything the message is even better in this sequel. Whereas the Littles still see Stuart as a family member, they do recognize that he is smaller and thus worry about him due to his size. Witness how Mrs. Little (Geena Davis) shows concern over the soccer game. They were almost blind to the fact that he was small in the first movie. Here at least they acknowledge it but still love him all the same.

Stuart Little 2 and its predecessor are perfect family films. They are filled with delightful, loving characters in a safe non-judgmental world. It is a fantasy from the heart that praises the beauty of belonging to a family. 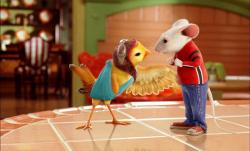 Ok, I have to admit that I haven't seen the original Stuart Little since it opened in theaters a while back. So maybe, just maybe I'm remembering it as funnier and more entertaining than it really was. Because of that it seems that the sequel, like most sequels, just isn't as funny and the Little family seems even sappier. And am I just remembering wrong, or could the Little's not talk to Snowbell in the first movie?

Like Eric, I feel that Nathan Lane, as the voice of Snowbell, has the funniest lines. His witty banter with Stuart is the highlight of the movie, although the sight of Stuart's little car stripped and robbed by presumably a gang of field mice, was pretty good too. On the whole though the movie is more sweet than funny. And did anyone but me, notice that Snowbell's line, "This is now, officially, a litter box!", which features so heavily in previews, is not actually in the movie?

Of the human actors, Geena Davis stands out, but only because her character seems to have turned into a Stepford Wife. Doing the gardening and housework in a dress, heels, and pearls, all while perfectly coiffed, made her seem as if she'd just stepped out of an episode of Leave it to Beaver.

And I know that a movie which features a talking, car driving, mouse shouldn't be scrutinized for accuracy, but didn't it seem just a little too convenient that Stuart found his airplane and was able to repair it so easily?

Yet for all its sickly, sweetness I still enjoyed it. Something about that little mouse struggling against all odds and still making it through, gets me every time. 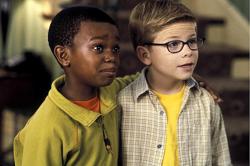 Like Scott I'm reviewing Stuart Little 2 without having seen the first Stuart Little movie since it first hit theaters way back in 1999. I have only the vaguest memory of it (I have no idea if the Little's could talk to Snowbell). I do remember not liking it much and finding it overly sweet. Well now that I've finally watched the sequel (nearly 13 years after it came out) I must admit I enjoyed it more than I remember enjoying the first one.

For starters it's less than 80 minutes long, the perfect amount of time for a kids movie. I detest the recent trend for animated movies to run 100 minutes or more. The old Walt Disney cartoons knew better, and so does Stuart Little 2. It speeds by like a crisp breeze on a sunny autumn day.

I love Geena Davis. Her performance as Mrs. Little has several layers. As Scott mentioned, outwardly she's a picture perfect 1950s housewife, patient and kind with an ever present smile on her face. But there's a sly twinkle in Davis's eye that lets the adult viewers know she's in on the act.

Hugh Laurie is also quite good. They bring to life this perfect Hollywood version of a wholesome New York City family and they both walk the line between camp and heart beautifully. The Little's are the perfect storybook family brought to life on the screen. Geena Davis and Hugh Laurie keep them from being obnoxious with their innate likability.

The story and these characters hold up well enough, although visually the movie has aged. The quality of the CGI dates it as early 2000s. Not that that ruins it by any means. In a way the fact that the special effects in the movie look old fashioned lends it a nostalgic quality that was missing before. I agree wholeheartedly with Eric. Stuart Little 2 is a delightful family film.