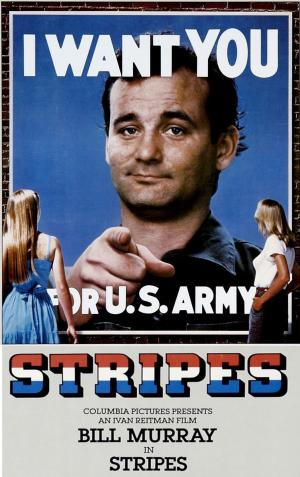 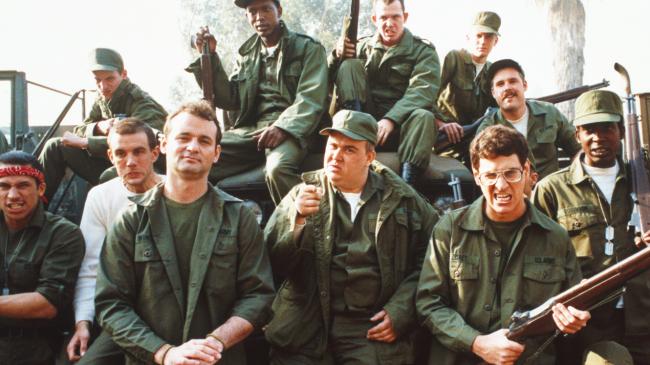 Stripes (1981) is the third comedy classic of Bill Murray's career following Caddyshack (1980) and Meatballs (1979). His streak would continue with Tootsie (1982) and Ghostbusters (1984). Not bad. Stripes borrows much of its plot from Goldie Hawn's Private Benjamin (1980), both are very funny movies. In fact they make a great double-feature.

As Hawn did in Private Benjamin, Murray enlists in the army after one particularly devastating day. Judy Benjamin's husband dies during sex on their wedding night, while John Winger loses his job, apartment, car and girlfriend all within a few hours. But whereas Judy Benjamin enlists on her own as a means of proving her independence, John Winger talks his best friend Russell Ziskey (Harold Ramis) into enlisting alongside him.

This buddy comedy was originally conceived as a vehicle for Cheech & Chong. When they demanded complete creative control, the script was re-written for Murray who insisted on Ramis being cast as the other lead and they do make a great duo. The most iconic moment in the movie is their rendition of “Doo Wah Diddy” during marching drills. Murray gets (and deserves) more of the credit for the success of this movie, but Ramis says my favorite line. It happens during their enlistment interview. When asked if they are homosexuals Ziskey replies, “No, we're not homosexual, but we are willing to learn.”

This being the early 1980s there's plenty of gratuitous nudity on display. John Candy even mud wrestles with a bunch of half naked women at one point. Depending on your sense of humor you will either find this scene hilarious or distasteful. I laughed at it but thought it dragged on a bit too long.

My favorite character is the drill sergeant played by Warren Oates. At first you think he's going to be the bad guy, and he is the butt of several jokes, but I love the fact that he turns out to be the hero. The supporting cast is filled with young -soon to be familiar- faces like Sean Young, Judge Reinhold, John Larroquette, Bill Paxton and Timothy Busfield.

The ending also echoes Private Benjamin as it includes a trip to Europe for the main characters. The clandestine military action at the climax to Stripes goes completely over the top but the whole thing is done with such a spirit of fun that it somehow just doesn't matter (to borrow a quote from Meatballs). Stripes (like Private Benjamin) is yet another movie I remember watching on HBO in the early 80s. Today whenever I watch it, I not only crack up at the humor, I also enjoy the ever thickening layer of nostalgia that time keeps adding to it. 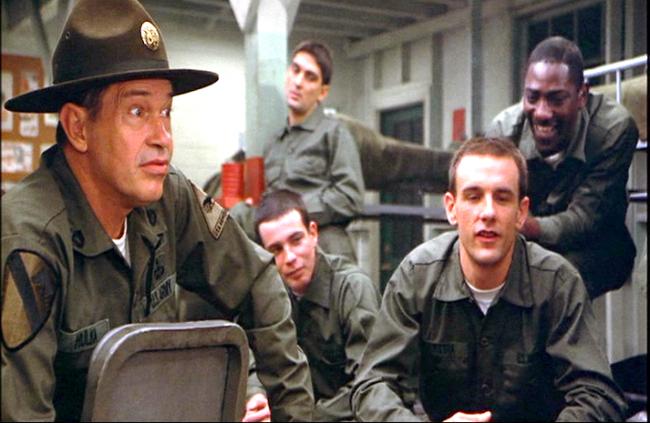 Stripes indeed makes for an interesting double feature with Private Benjamin. They were made near the same time and both poke humorously, but gently, at the military and its strict manners. Both also demonstrate the positives of how the military promotes personal growth and maturity. Private Benjamin is about a woman learning to not be a doormat for every man she meets, while Stripes is about a loser finding his place in life as a leader.

Like Private Benjamin, I watched Stripes many times when I was younger. and like its predecessor, it plays fast and loose with the reality of being in the military. No one thinks to assign a new Sargent to this platoon after the first one gets seriously wounded? What I did find sincere about it was the depiction of the men in uniform. I bet there is a Psycho the hot head, Elmer the party boy and Cruiser the ignorant in every platoon that ever existed. The perpetual clueless look on John Diehl's face is the best, "dumb," yet likable, look I have ever seen. My favorite stereotype is that of the arrogant Captain. He has no means of, or interest in, relating to the men under him. His funniest moment is when he inadvertently pulls the pin on a live hand grenade and has no idea what to do with it so he hands it to his assistant and tells him to, "Hold this."

Patrick mentioned his favorite line, while mine has always been when Bill Murray answers the General's question about what kind of training the platoon has completed on its own, "Army training, sir." The way he says that line always makes me laugh. It is a great comic who can make a line funny or funnier.

Patrick also mentioned the amount of nudity and it is rather interesting that there was more female nudity then in movies than now. Even my 20 year old son was surprised by it. Today it seems like there is more male nudity in Hollywood movies than female. He and I found the mud wrestling scene hilarious. John Candy imitates Curly, from the Three Stooges, and starts taking mud smeared girls bikini tops off. What's not to like? In my hetero opinion, it did not drag on too long.

As for Warren Oates as the drill instructor, sergeant Hulka, I too liked how his character played out. Much like Eileen Brennan did in Private Benjamin, he is playing the stereotype of the domineering company commander. The big difference is that he knows how to handle his men and he and John share a scene at the end where they subtly acknowledge a new understanding and respect for the other. It is a scene that is unfortunately missing in Private Benjamin. 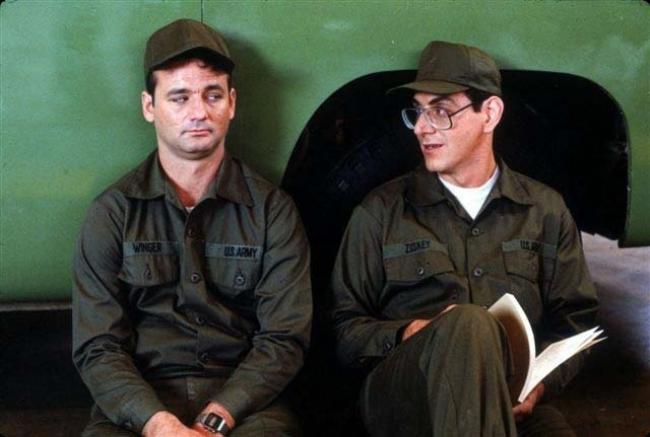 There's a famous saying in comedy that "Timing is everything". I mention it because without realizing it, I chose the extended cut of Stripes, which adds 19 minutes to the running time, and it killed some of my enjoyment of the film. This is a silly little comedy that doesn't have enough story to support a full 2 hours. And the scenes that were cut, deserved to be cut. This is especially true of the surreal 9 minute scene of Murray and Ramis deserting, parachuting from a plane, and ending up sharing some drugs with a group of rebels in a jungle. I'm guessing with the heavy use of drugs in this sequence that it was left over from the original Cheech & Chong version of the script. More enjoyable, but equally superfluous, is a two minute scene of Murray and P.J. Soles fooling around in a hotel with Soles topless for the entire scene.

My brothers compared this film to Private Benjamin, and the time of release and general plot, makes them easy to compare. However, I consider Private Benjamin to be the superior film, although Stripes is more consistently funny. Benjamin has a character arc that Murray's John Winger never gets. He's still basically the same guy at the end of it as he was at the beginning. Benjamin learns to standup for herself and becomes a better person. Winger stumbles into success while remaining the same irresponsible ne'er do well he's always been, only now he can operate weaponry. There are a couple of moments in the film, such as the confrontation in the bathroom between Winger and Hulka and the scene at the airstrip at the end again between Winger and Hulka, that hint at the possibility of something deeper, but ultimately Murray and co. seem more interested in getting laughs than trying to make the characters three-dimensional.

Like Patrick I think Murray and Ramis work well together, something they would prove again in Ghostbusters. Ramis's more nerdy, reluctant, persona plays nicely off of Murray's relaxed slacker. They have an easy rapport that allowed them to ad-lib in many of the best scenes. Although the supporting cast is filled with many recognizable faces, as my brothers pointed out, it is the two leads who really make this movie. Murray is clearly the star and has the funniest lines, but without Ramis supporting him and reacting to them, they wouldn't be quite as successful. Not that Ramis doesn't provide plenty of laughs on his own with his dry delivery. My brothers mentioned quotes, so I'll throw in one of his that I like, which is more subtle than Murray's rapidfire jokes, "I've always been kind of a pacifist. When I was a kid, my father told me, 'Never hit anyone in anger, unless you're absolutely sure you can get away with it.' I don't know what kind of soldier I'm gonna make, but I want you guys to know that if we ever get into really heavy combat... I'll be right behind you guys. Every step of the way."

I too remember watching this movie many times as a kid. Watching it now, for the first time in decades, I have to say it didn't quite live up to my memory of it, although no doubt that is in part to the extended scenes I mentioned. This is a silly little film with some endearingly comical performances. It should be played with a quick pace. Those extra scenes just drag the movie down. 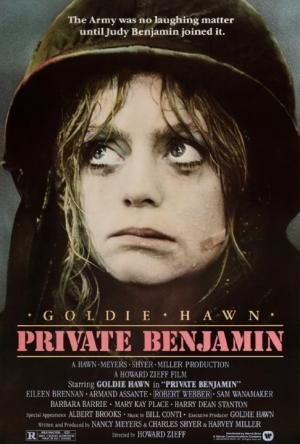