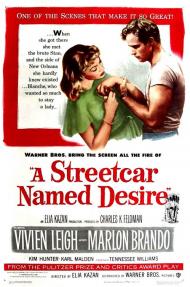 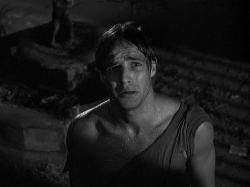 Marlon Brando, as Stanley Kowalski, gives the most intensely riveting, sexually explosive performance in movie history. It's impossible to think of another actor in the role. He created it on Broadway in what is probably the most famous run of a dramatic play in the 20th Century.

This is the tragic story of the mentally unstable Blanche Dubuois who flees her Mississippi plantation to live with her sister Stella and Stanley, Stella's husband, in one of New Orleans low rent districts. We see her slowly descend into madness at the hands of the brutish Stanley; with an assist by Karl Malden as Mitch.

Vivien Leigh gives the second greatest performance of her career, ironically as another southern belle. This time around, however, she is far more tragic. Kim Hunter rounds out the cast as Stella. She makes you feel every bit of her uncontrollable passion for her insensitive lout of a husband. In many ways her treatment of Stanley is that of a sex object - he's her man-toy.

And although it is Brando's primal scream of 'STELLA!!!' that is remembered most vividly, the best lines are spoken by Blanche. Such as... 'I have always depended on the kindness of strangers.' Or when she tells Stella 'You weren't there to see that long slow march to the graveyard, to which all but you and I have now retreated.'

Still this brilliant movie belongs to Marlon Brando. He received the first of four consecutive Best Actor Oscar nominations and became an instant international sensation. Along with Montgomery Clift and James Dean, Brando completely revolutionized American movie acting. The term Method became a part of the language of cinema.

Elia Kazan directs with purpose and authority. He wound up with a movie that raised the ante on the level of naturalistic acting in film.

Streetcar is highly verbal and is paced leisurely, but for the patient viewer the payoff is huge. 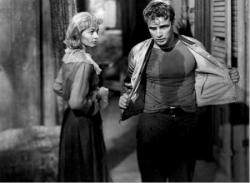 Vivien Leigh and Marlon Brando in A Streetcar Named Desire.

Okay, Brando is good here. Yeah, he sweats a lot in his tight t-shirt. But the point of Stanley Kowalski being a testosterone filled creature is that it's everything Blanche despises and fears. She appreciates refinement. He's loud and obnoxious. She likes to give instructions not take them. She likes men she can control and dominate. Like mama's boy Mitch, or the young man at the door she attempts to seduce. Blanche can't manipulate Stanley or pull the wool over his eyes and he's to stubborn to give her the benefit of doubt.

They battle for control over Stella. Blanche fills her with thoughts of a better life and attempts to make her feel guilty for running off and marrying Stanley. Where as Stanley gives Stella excitement, sex and the winning blow; a baby.

Great performances from everyone. But the pace and the same black and white setting gets a bit tedious after a while. 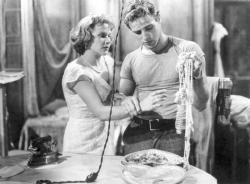 Kim Hunter and Marlon Brando in A Streetcar Named Desire.

Okay, I have to say up front, that I disagree with nearly everything Eric says in his review. His review skims the surface of this movie, but the heart of this movie beats far below the surface.

In fact, Blanche's character is all about surface appearances versus what's going on inside. Her upbringing tells her she should be a gentile lady, and although she manages to keep up this facade, her true character leaks out despite her best intentions.

She finds herself attracted to Stanley. Note the way she watches him as he prowls the apartment. Or the way she peeks out the window as Stella descends the stairs to the screaming Stanley. She attempts to seduce the young delivery boy. Yet in her mind, she can justify these actions because no one knows about them. To protect her secret, as her attraction to Stanley grows, she increases her protests to Stella about Stanley. But if you listen closely, you will come to the conclusion, 'Me thinks she doth protest too much'.

Another subtler indication of Blanche's duality, is the scene with Karl Malden where she remains in shadow during their conversation. He hears what she wants him to hear, all the while keeping her true self hidden. A truly symbolic moment.

The reason she dates Karl Malden's character is, as Eric pointed out, because he is weak and malleable. But not because she is attracted to him, far from it. She dates him because he is too weak and submissive to stumble upon her true self. He will believe any face she shows him.

Only Stanley sees through her facade. Too blunt and animalistic to bother with manners, his instincts tell him that she is not what she seems.

Not that Stanley is any kind of hero in this movie. His attack on Blanche at the film's climax is brutal. She may desire him, but when her idea of what she should be, and the fact of what she is, collide, due to this attack, it snaps what ever is left of her fragile mind.

This is not the kind of movie you can watch over and over again, but it will take you several viewings to pick up on the nuances of these amazing performances. 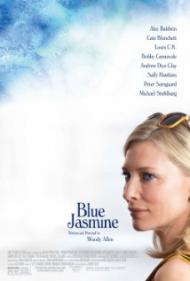