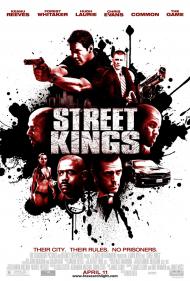 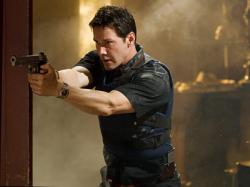 Apparently author James Ellroy and director David Ayer have some serious issues with Los Angeles Policemen. As with Ellroy's LA Confidential, LAPD takes a serious hit in Street Kings. Almost every cop seems to be working the system and breaking the law. Ayer spared no expense showing corrupt policemen in Training Day and now revisits that territory with just as much gusto.

Reeves stars as police officer, Tom Ludlow. I was going to write that he plays Tom Ludlow, but who would I be kidding? Reeves never really plays anyone but himself. The guy acts with only one expression. Ludlow is a veteran LAPD cop who thinks nothing of breaking the law to get the job done. Early on in the movie he rescues some kidnaped girls by gunning down several men and then plants evidence to make it seem like he was shot at. He does it in such a casual manner that you know it is something he has done before.

Although Tom seems like a vigilante, he is not a rogue cop. He is part of the system. His immediate supervisor is fully aware of all of his wrong doings and encourages it all. Later, when Tom is implicated in the murder of his former partner, his squadron mates help hide evidence and attempt to sweep it all under the rug.

With the help of a detective investigating Tom's involvement in the murder, Tom starts to learn that he does not have a clear understanding of all that is going on. His loyalty is called into question, and his conscience starts to work.

Ellroy often writes quite bluntly about race and Street Kings is no exception. The best line in the movie is when Tom is talking to some Korean gang bangers and tells them that they, "dress White, talk Black, and drive Jew." The worst line is the one that made the trailer. It is where a gang member is caught in some barbed wire, after being chased, and tells Tom that his name is, "Quicks." to which Tom replies, "Apparently not quick enough." For Ellroy's sake, I hope one of the other two writers, given screen credit, came up with that rust bucket of a joke.

Street Kings tries hard to distract the audience with plenty of action, blood and foul language, but the twists and ending can be seen from very early on. One saving grace, and perhaps another form of distraction, is the very recognizable cast. Besides Reeves, Evans and a slumming Whitaker, the supporting players are almost all recognizable. Terry Crews is best known as Chris's Dad on Everybody Hates Chris. Naomi Harris played Selena in 28 Days Later. Amaury Nolasco played the drunk, baseball player in one of the funniest scenes in The Benchwarmers.