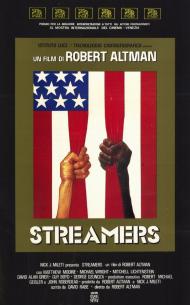 Streamers was the twenty-first motion picture directed by Robert Altman. It came during a phase in his career in the early 1980s when he was adapting stage plays for the big screen. The all-male cast of Streamers was in direct contrast to his previous year's nearly all-female movie Come Back to the Five and Dime, Jimmy Dean, Jimmy Dean. In both movies Altman remained true to the source material without trying to open them up for the screen.

Streamers takes place entirely in one night in an army barracks in 1965 as six American soldiers await their orders to ship out to Vietnam. Over the course of this one night the drama quickly escalates until it reaches a sudden and explosive boil. Issues of race and sexual identity are examined as four new recruits and two veteran sergeants (both of whom spend the entire movie drunk off their asses) are forced together as they mentally prepare for war.

The screenplay was adapted by David Rabe from his play. Rabe based it on his own experiences as an army draftee serving in Vietnam. It was the third play in his trilogy dealing with the war, following Sticks and Bones and The Basic Training of Pavlo Hummel. The title refers to the word the soldiers use to describe a parachute that fails to open but instead streams in the air as the soldier plummets to his death.

Streamers tells a brutal story that is akin to watching a six car pile-up on the freeway. These men create tension through their own ignorance and intolerance of others who are different from themselves. Billy (Matthew Modine) is a conservative country boy, Roger (David Alan Grier) is a middle-class African-American, Richie (Mitchell Lichtenstein) is a rich kid who also happens to be unabashedly gay, and Carlyle (Michael Wright) is a volatile black man from the streets. Streamers is a violent clash of these disparate personalities.

The camera never leaves the inside of the barracks. In one scene Billy and Roger are playing basketball outside and they are shown through the window, at one point we overhear their conversation but the camera (and the audience) stays inside this one room. This forces the viewer to share the sense of claustrophobia felt by these characters. This technique serves the material well.

The one problem that comes with filming a stage play as a movie while remaining this true to the source is the fact that in a play the audience member can choose where to focus their attention at any given time. Watching a movie, however, we are completely at the mercy of the director and where he chooses to focus his camera. There are a few times when I would have preferred to watch the entire group interact but Altman instead chooses to zoom in on just one actor. It doesn't detract much from the story but it does prove that no matter how true to the play you attempt to be when making a movie, you can never fully duplicate the experience on film.

Streamers is extremely well-acted. In fact, in a very rare occasion, the entire cast was awarded the Best Actor Award at the 1983 Venice Film Festival. This was David Alan Grier's film debut, and although he is best known as a comedic actor, he proves himself equally adept at playing drama. Matthew Modine is also quite good in the role of Billy, as is Mitchell Lichtenstein as the flamboyant Richie. But for my money the two outstanding performances belong to Michael Wright as the tragic Carlyle and George Dzundza as the constantly inebriated Sergeant Cokes.

Streamers isn't for the faint of heart. It is brutal and violent and lacks a happy ending. But it is a powerful piece of filmed drama. The dynamics between the four main characters is very intriguing. Billy and Roger get along like best friends. They share laughs, play basketball together and discuss whatever subject comes to mind, which often seems to be whether or not Richie is gay. Richie is obviously a homosexual to Billy while Roger is not sure. All three are bunked together because of their designated military assignment. All three are from the middle/upper class but are separated by basic stereotypes. Billy is the white guy, Roger the black guy and Richie the queer.

They tease each other and argue but generally get along. Billy and Roger laugh at Richie for using baby powder. Roger and Richie play a prank on Billy. At one point Richie tells Billy, “Wit is my domain. You’re in charge of sweat and running around the block.” We first see some tension when Richie flaunts his sexual preference, making Billy and Roger uncomfortable. Billy yells at Richie that, in short, he does not care that he is gay but he does not want to have to deal with it. The outburst also suggests that Billy suspects that Richie has a crush on him.

Into their barracks comes the low class Carlyle, who only vaguely knows Roger. Upon seeing him, Billy asks Richie who he was. Richie answers, “He was looking for Roger. He didn’t even know his name.” Due to a shared ethnic background, Carlyle assumes Roger is his doorway in. He asks Roger to hangout but Roger gently turns down his offer. He is uncomfortable with Carlyle but pretends to still be his friend.

Carlyle forces himself into their lives. Carlyle is jealous of the threes camaraderie and perceived special place in the military. Carlyle complains several times that he does menial tasks while they have a whole barracks to themselves. He busts into their barracks drunk and complaining, “I don’t got no fucking job!” The three other solders put him to sleep in their room with a pillow and blanket. They are nice to him even though they have no real interest in his unstable friendship.

Things become complicated in the second act (the next day). Here we truly see how these people can affect each other. Tempers flare and everyone’s strengths and weaknesses come to light. One of the four kills another, with the other two playing an indirect hand in the murder.

Streamers is an emotionally raw, acting tour d force. Every actor has to go from subtle to in your face and often more than once. These are well defined characters if not always likable. Each young man reveals a flaw or two at some point in the film and I was on each young man’s side at different points in the story.

The two inebriated veterans are around to remind the boys just how dangerous and bleak their futures may be. Their tales and song are truly disturbing. They add another layer of stress in these young men’s lives.

I agree with Patrick on the direction. A close up in a movie following rules set by the play is out of place. There were times I wanted to see what another actor was doing while Altman was aiming his camera at a single actor. One example of this is when Richie is sitting in a bunk below Carlyle and he begins rubbing Carlyles legs flirtatiously. We see that it bothers Billy to see Richie act in that manner but we never see Carlyle’s reaction. And what is with those close ups of hands in the air.

Streamers is a thought provoking, emotional stumble down a stone hill that ends on unforgiving jagged rocks.