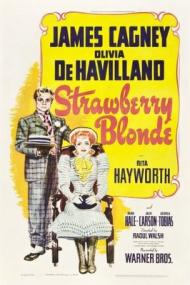 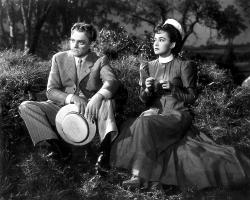 James Cagney and Olivia de Havilland in The Strawberry Blonde.

The Strawberry Blonde is a charming and nostalgic look at turn of the century New York City as seen through the eyes of 1940's Hollywood. This is the era of barbershop quartets, handlebar mustaches and large feathered hats for the ladies. Telephones, automobiles and electric lights were all considered to be new-fangled contraptions by all but the most progressive members of society. Ah yes, it was a quieter, simpler time. The golden age of hometown America that stretched from the end of the Civil War to the beginning of U.S. involvement in the Great War and reached its pinnacle during the first decade of the 20th century.

James Cagney plays Biff Grimes, a young man studying to be a dentist through a correspondents course. He tags along on a blind date with his friend Hugo Barnstead (Jack Carson) to a picturesque spot in Central Park. Here they meet up with the ravishing strawberry blonde herself Virginia Brush (Rita Hayworth) and her friend Ann Lind (Olivia de Havilland). At first Virginia seems ladylike and demure, while Ann portrays herself as a cigarette smoking girl whose mother wore bloomers and grandmother was on the stage. How shocking! Of course later she is revealed to be a complete phony, putting on a front to the world while secretly cherishing old fashioned morals. Virginia, on the other hand, turns out to be high maintenance, she is sort of an early prototype for today's bitchy high fashion model. And she is not above marrying a man she doesn't love for his money.

The main gist of the story is that Biff thinks he is in love with Virginia, but after her marriage to Hugo he eventually marries Ann. Then Hugo lets Biff take the fall for a shoddy business deal and poor Biff goes to prison for a few years. He does manage to get his dentistry diploma while incarcerated and shortly after he returns home to the faithful Ann, He is able to exact revenge on the backstabbing Hugo and the movie has a happy ending.

Rita Hayworth steals several scenes, not only with her stunning beauty and curvaceous figure, but she gets some of the funniest lines as well. The best one is in the scene where Hugo gets his comeuppance. When he keeps repeating that he doesn't understand what just occurred she replies in an exasperated voice, "Come on, let's go home and I'll explain it to you... with blocks."

The Strawberry Blonde will put a smile on your face and a song in your heart. 'The Band Played On' is heard throughout the movie and is even featured as a sing-a-long right before the final credits. 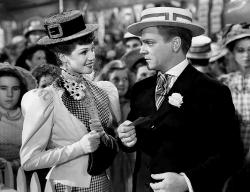 Rita Hayworth and James Cagney in The Strawberry Blonde.

I guess that in the early 1940's people were pining for a simpler time. Who can blame them? Europe was in chaos and America was being dragged into the second World War. Hollywood looked to pre World War I as a peaceful time to adore.

One of the movies made with this in mind was The Strawberry Blonde. It stars two of my favorite actors, James Cagney and Rita Hayworth. It's great to see such stars together on screen. As Patrick wrote, the movie takes a fond look at a simpler time. A bit too fond of a look in fact.

Cagney was originally known as a tough guy, but in movies like this, The Bride Came C.O.D. and Mr Roberts, he proved to be an adept comedian. One of my favorite scenes in this movie is where Cagney is practicing on how to be a dentist on his father (Alan Hale). He is reading the instructions on how to use the nitric oxide as he is putting the mask on his skeptical patient.

De Havilland is billed over Hayworth, but Hayworth outshines her in every scene. Hayworth just had that movie star glow that attracts you to her whenever she is on screen. De Havilland does have a good scene where she gets preachy about being a suffragette. Still, she will always be Melanie Wilkes to me.

About the same time this movie was being made MGM did Meet Me In St Louis. It takes place at the turn of the century as well. It is also a comedy/drama. Both movies even feature similar songs. At the beginning of The Strawberry Blonde some one is singing a few bars of Meet Me In St Louis. Besides being in color, the big difference in these movies is that Meet Me In St Louis lets the details of the time play out in the background. Too often in The Strawberry Blonde, the scenes and dialogue seem constructed just to show the details and nuances of the time.

A great cast that includes the under acknowledged Jack Carson. The guy had a great speaking voice. You may not recognize the name, but if you watch this movie you will swear you have seen him in something else. He would again play comic relief opposite Cagney in The Bride Came C.O.D. He would also do drama opposite Judy Garland in A Star Is Born.

The great cast gives this movie most of its appeal. They lift this movie above its slightly leisurely pace. Raul Walsh spent too much time meandering around the time period. Perhaps on purpose, but all the details tend to slow the movie down. The stars make this movie great not the setting. 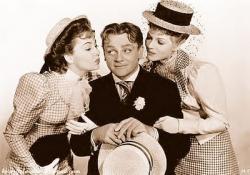 Biff is a name you don't hear anymore. It's old slang for "to hit" and it certainly suits Cagney's character in this movie. He's such a little scrapper here, willing to take on anyone, including a young George Reeves (Superman) and his hot headed college chums. The fact that he loses nearly every fight only makes him that much more likable.

This is a nostalgic look back at the early 1900s and most of the time it is a charming look, but this movie is definitely at its best when it keeps things light and funny. Without a doubt, the weakest part of the movie is when Biff ends up going to prison following one of the character's death. It's as if someone dropped a short melodrama into the middle of a comedy. It soons get back to the humor with Cagney doing some dentistry on the warden, but I found that short moment rather jarring.

After seeing this movie and Only Angels Have Wings recently, I'm starting to come to the conclusion that I'm not much of a Rita Hayworth fan. Sure, she was hot as hell, but honestly, she's not a very good actress. Both of you, Eric and Patrick, mention her stealing scenes, but I can't think of one where she did. And while I too almost always think of de Havilland as Melanie from Gone with the Wind, I actually think she has some great scenes here. I laughed when Cagney and her go on their first "date" and she tells him how progressive she is; punctuating each remark with a wink and the phrase, "Exactly!".

Eric, you forgot to mention Arsenic and Old Lace when you talked about Jack Carson. He plays the young Police Officer who doubles as a playwright, stealing many scenes in that classic comedy. Like Carson, Alan Hale also gets a few nice scenes here as well.

Of course this is Cagney's movie and he carries it effortlessly on his pugnacious little shoulders. He was short and didn't exactly possess matinee idol good looks, but Cagney certainly had that elusive It that makes a star into a Star. He's the best reason to watch this movie.