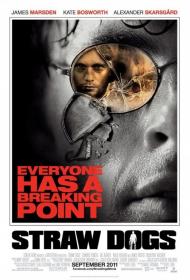 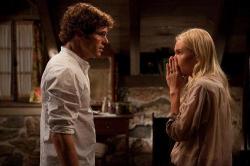 While the previews for this movie heavily showcase the climax where married couple David (Marsden) and Amy (Bosworth) battle a group of rednecks who are trying to invade their home, that's really only the last 20 minutes or so of the plot. There's an awful lot of boring dialogue and poor symbolism in the hour and a half that precedes that Home Alone meets Deliverance finale.

I've never seen the original Sam Peckinpah version of this film, but apparently the plot remains faithful to it, with just a change of location from England to America. David and Amy are married. Upon the death of her father they return to her childhood home in the deep South. He's a screenwriter and she's an actress. David hopes to get in some writing while they get the old place restored. To that end they hire a construction crew lead by Charlie (True Blood's Alexander Skarsgard), a high school boyfriend of Amy's. While they seem friendly enough to begin with, the crew turn sinister, playing a few potentially deadly "jokes" on David, murdering a cat before finally raping Amy and attacking the house as shown in the previews.

The tagline for the movie is, "Everyone has a breaking point" and refers to David. It's hinted that he's Ivy League educated, he listens to classical music and is teaching Amy to play chess. You can tell that he's used to using his mind rather than his fists. The finale is when he finally fights back. Prior to that he dances around his encounters with Charlie and is afraid to offend him or his men.

The rape scene that is included seems odd to me. Amy is raped by Charlie and one of his men, but she never tells David about it. You'd think that this - an attack on his wife and his manhood - would be the thing that pushes him over the edge, but he never finds out. Instead he lets Charlie walk all over him for the entire movie and only stands up to him at the end when he's protecting the town idiot whom Charlie and crew rightly suspect of harming a teenage girl. Without using it as motivation for David to fight back, why is the rape scene included at all?

Part of my problem with this movie is that I never really found David or Amy to be all that likable. David is too wussy and timid. He's also a bit condescending towards the townspeople. Amy has one annoying scene where she gets ogled by Charlie's crew and complains about it to David, who points out that maybe she should wear a bra, which causes her to get upset. Frankly he's got a point. She walks by them in shorts and a sweat soaked shirt that clearly shows her nipples (who goes jogging without a bra anyway?) and then is surprised that they look? Don't get me wrong, I am definitely NOT saying she asked for it or in anyway caused the rape by wearing skimpy clothes. However, in the very next scene, to get back at the men for staring at her and at her husband for not responding properly, she goes upstairs and undresses in front of the window so that the construction crew can see her naked. Now, if you saw a hungry lion looking at you, would you pick up a bloody steak and wave it in  front of him?

The finale of the movie is fairly tense and exciting. It's also fairly bloody as people get shot, nailed by a nail gun and caught in a bear trap. It is easily the best part of the movie and it's easy to see why it's featured heavily in the marketing.

As I said, I've never seen the original Straw Dogs and this remake certainly hasn't made me want to go out of my way to do so. You can lump this one in with those movies that are dumped in September. 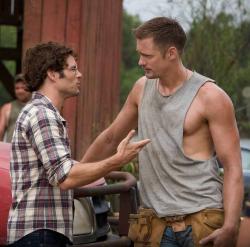 With Straw Dogs, Hollywood again depicts the south as completely backwards and out dated.  The soundtrack features old songs.  The film starts with Mickey Dolenz, from The Monkees, singing "Goin Down."  David tries to pay for lunch with a credit card, but these yokels only take cash.  "You know, what poor people use for money."  The waitress explains.  Everyone in town goes to the same church and worships football.

The good ol boys who start working for David, address him as "sir."  They hunt, drink beer, drive a pick up and of course played football in high school.  David does none of those things.   They have nothing in common.  Once when the guys comment on how hot it is, one red neck says to David, "Must be that global warming you educated guys keep talking about."

The part where the guys notice Amy in her tiny shorts and she gets pissed when David does not react as she wants him to, is ridiculous.  When she gives them a show, she steps over a line.  David leaving in the middle of church services, to sit in his car is likewise rude.  Would he not be offended by someone walking out of a premiere of a film he wrote.

The script makes an effort to be fair with the characters, but it fails in never showing a connection between David and Amy.  They seem blissful together as long as they are not speaking.  Once they do, they seem disappointed with each other.  Amy treats David like he has no balls.  She even jokes that he has a small penis.  When she wants David to ask the guys about the cat, she says sarcastically, "Any effort would be greatly appreciated."

I am not sure what they see in each other.  He does not act like the man she wants him to be.  She is not the intellectual that he wants her to aspire to be.  He plays her classical music and teaches her to play chess.  They are each wishing the other was something they are not.

Scott, I question your opinion of the "rape" scene.  Charlie is aggressive with Amy, but her objections are mild and once the act starts she seems a bit complacent.  When the other guy grabs her she becomes very angry and scared.  She showed neither of those emotions when Charlie was doing her.  The fact that Charlie is played by the muscular Skarsgard and the camera lingers on his shirtless shaved torso implies that the sexual encounter may not be an entirely unpleasant one for Amy.   That would explain why she never tells David about it.

The character of the mentally challenged Jeremy, mirrors both David and Charlie.  Like David, he is picked on by others and never stands up for himself.  Like Charlie, he reacts incorrectly to a situation.  Charlie thought Amy wanted him, "What happens when thy neighbor's wife covets you?" and Jeremy thought he was protecting Janice.  Both realize their mistake too late.

Straw Dogs turned out better than I thought, but I found that final twenty minutes to be the least entertaining.  Charlie goes from being a jealous horn dog to a sadistic criminal.  David meanwhile, turns into McCauley Culkin in Home Alone.  It is the conflict between David and Charlie that is the meat of the film.  They are both jealous of what Amy may see in the other.  All the killing at the end seems like too easy of a way to end it. 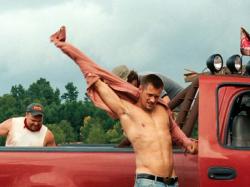 In 1971 Sam Peckinpah's original screen adaptation of Gordon Williams' 1969 novel The Siege of Trencher's Farm (renamed Straw Dogs after an ancient Chinese proverb) starring Dustin Hoffman created quite a controversy over its violence and in particular the rape scene where Susan George appears to enjoy it.

Forty years later the remake of Straw Dogs raised nary a peep of protest. In the intervening decades screen violence has become so ubiquitous that it lacks any remaining shock value plus they did tone down the wife's seeming enjoyment of the rape. As Eric mentioned, she seems a bit complacent and resigned to her fate but she certainly isn't shown being sexually aroused by it as George was.

Changing the setting from the English countryside to the rural American south allows for the inclusion of redneck stereotypes. This includes pretty much the entire town, as Eric wrote. The only way you can tell it's the new millennium is by the fact that the sheriff is black. Although he is a completely one-dimensional bland hero who takes a bullet for his troubles. The climax never rings true as it suggests there's very little difference between being a small-town hell-raiser and a psychotic rapist/killer.

I agree with Scott about the boring dialogue and poor symbolism. The Peckinpah version never spells out the meaning of the title like this movie does. I will add that the acting isn't all that great either. James Marsden never gets under David's skin,  Alexander Skarsgard seems to possess just one facial expression (a blank stare) and even the normally reliable James Woods over acts badly. Kate Bosworth alone gives a performance worth including on a resumé as Amy.

The original version also ended on a brilliant psychological note with Hoffman admitting he doesn't know his way home, meaning not just the location of his house but also where he left his humanity. This movie dumbs it down by ending with Marsden proudly stating, “I got 'em all.”

Straw Dogs does feature a few decent action sequences and there is a jolt of adrenaline that comes when the cerebral David finally starts fighting back. This causes Charlie to begrudgingly admit, “Son of a bitch got some man in him after all.” It's just too bad the movie is filled with such shallow caricatures acting upon poorly structured motives.