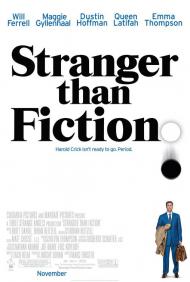 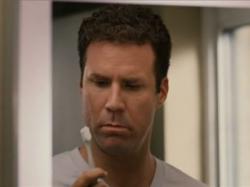 Will Ferrell in Stranger Than Fiction.

Stranger than Fiction is a quirky little movie that isn't perhaps, quite as strange as it would like to be. It's also, thanks to some clever editing in the trailer, not as funny as it's pretending to be. Despite all that, it's still an enjoyable movie that entertains, thanks in no small part to its likable and talented cast of actors.

A very toned down Will Ferrell stars as Harold Crick, a rather dull IRS Auditor with a set routine in life that revolves around numbers. He counts the number of steps to the bus stop, the number of times he brushes his teeth and just about everything else in his life that can be counted. His routine is disrupted when he suddenly begins hearing a voice narrating his life. Not only does the voice describe his every movie, it also predicts things that will happen and describes the thoughts of others. When a psychiatrist is unable to help him, he seeks the advice of a literature professor (Hoffman). The professor at first scoffs at the notion, but when Harold mentions the phrase, "Little did he know...", the professor decides to help. It seems that he once wrote a paper on those four words.

Little did Harold know that the voice he is hearing is that of author Karen Eiffel (Thompson), who is writing a book about an IRS auditor named Harold Crick. Currently, she has writer's block and is unable to come up with a meaningful way of killing of her main character. For the purpose of this story, she is basically god, but the question remains open as to whether she is simply writing what Harold is doing or whether Harold does what she writes, or perhaps it's some combination of the two. Either way, despite registering initial shock and doubt, no one ever seriously question how Harold is hearing her voice.

The reason the movie works as well as it does is because of the likability of Will Ferrell and the rest of the cast. He plays the befuddled number-cruncher perfectly straight and yet charmingly so. You sincerely do want him to find a happy ending to his story. Hoffman is equally good as the professor who treats Harold's predicament as an interesting intellectual exercise. As you'd expect Emma Thompson is perfect as the author with the death fixation. She seeks inspiration by journeying to the critical ward of the hospital and by seeking out suicide spots. Maggie Gyllenhaal, the movie's current "it" girl, is charming and sweet, despite having the weakest character. She plays some sort of idealized liberal bakery owner who refuses to pay the portion of her taxes that she has calculated will go towards that part of government of which she doesn't approve.

A good portion of the story involves Harold trying to figure out what the voice is and where it's coming from. It therefore seems a mistake to me that the answer is revealed to the audience almost immediately and even before the movie starts thanks to the previews. It might have added more of a mystery if we had to wonder whether Harold was crazy or not.

Still, despite any slight weaknesses, this is an amusing little quirky vehicle that not only entertains, but actually contains a few thought provoking scenes. 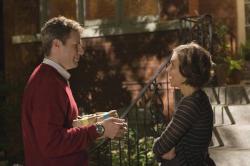 Will Ferrell and Maggie Gyllenhaal in Stranger Than Fiction.

“Thought provoking scenes?” The only thoughts this movie induced in me were ones like, “I think this is the dullest movie since Bewitched.” And “Dear God, isn't it over yet!”

Forster constantly has characters looking through windows and mirrors. I am sure he is trying for some symbolism, but I am too damn bored with this movie to even try to figure out what it meant.