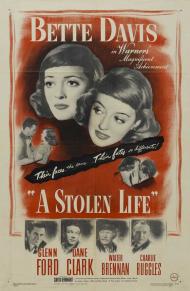 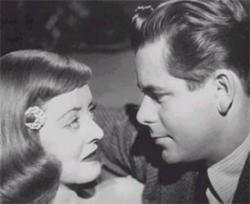 Bette Davis and Glenn Ford in A Stolen Life.

A Stolen Life was the first movie produced by Bette Davis' production company B. D. Productions. It was a huge hit for parent company Warner Bros. Bette Davis plays twin sisters Kate and Patricia Bosworth. Katie is the goodhearted aspiring artist while Pat is the evil twin who steals her man. Countless sitcom episodes have copied this formula and, in fact, Bette Davis would do it again nearly twenty years later in Dead Ringer. You know that the evil twin will be innocently mistaken for the good twin early on in the movie and that the good twin will eventually assume the role of the evil twin in the end.

In a picturesque New England town Katie meets handsome lighthouse inspector Bill Emerson (Glenn Ford). They are immediately attracted to each other. The next day he meets the more glamorous Pat and mistakes her for a 'dressed up' Katie. Once the identities of the sisters is sorted out Bill finds himself caught between them. The less confident Katie gives up; refusing to compete with Pat she loses her man. Fate intervenes (as fate always does in these old melodramas). Katie and Pat go sailing together in an attempt to bury the hatchet. They get caught in a sudden squall and the boat capsizes. Only one sister makes it to shore. So Katie assumes her sisters identity in order to get her husband. Will she be able to convince Bill and her artist boyfriend (whom she had turned to for comfort after losing Bill to Pat) that she is really her sister? This is a Bette Davis movie after all, so you can expect some high drama before the credits roll.

Audiences were thrilled at seeing two Bette Davis's on screen interacting with each other. Although by today's standards the technology is primitive there is at least one moment that holds up well. In the first scene that the twins are shown in together Katie lights a match and hands it to her sister. I'm sure this caused audible gasps in 1946. And it is interesting to compare this to the recent Adaptation and see just how far technology has come since then.

As a producer, Bette Davis surrounded herself with topnotch talent and she gives another flawless performance giving each sister subtly different idiosyncrasies. A Stolen Life is not one of her most remembered films but it is worth a look. 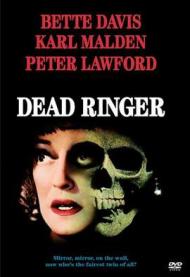