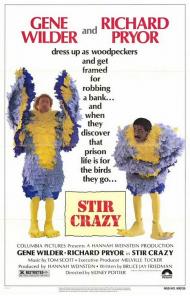 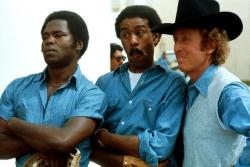 Richard Pryor and Gene Wilder were a great comedy team. They first worked together on Mel Brooks' classic western spoof Blazing Saddles. Pryor was initially supposed to star opposite Wilder in the role that eventually went to Cleavon Little after the studio balked at casting the controversial stand-up. Pryor did receive credit for co-writing the script. In 1976 they appeared in front of the cameras together for the first time in Silver Streak, which was a big hit. Four years later Sidney Poitier hired them to star in his first directorial effort in which he himself wouldn't appear.

Pryor and Wilder would re-team in the late 80s and early 90s for two more comedies, See No Evil, Hear No Evil and Another You, but Stir Crazy was by far the biggest hit of their four movies together. It was also the biggest hit Poitier ever directed, becoming the first movie helmed by an African/American to gross more than 100 million dollars domestically. Stir Crazy was in fact the third highest grossing movie of 1980 behind only The Empire Strikes Back and 9 to 5.

Stir Crazy is a silly raunchy prison comedy that I loved as a kid. This is another of those movies my brothers and I saw on HBO numerous times in the early 80s. Watching it today for the first time in decades, it's quite dated yet it remains a very funny film. Pryor and Wilder hit the jokes back and forth like two tennis pros trying to get the ball past each other. Many of their scenes were improvised and they provide some of the movie's funniest moments.

Pryor and Wilder play best friends. Pryor is an actor named Harry Monroe and Wilder is a writer named Skip Donahue. Like the great comedy duos of the past (Laurel & Hardy, Abbott & Costello, Martin & Lewis), they seem almost like a married couple. The plot is set in motion when they are both fired from their jobs and decide to move out west. On their way to California from New York they take an assortment of odd jobs. One gig has them dressed up like woodpeckers while singing a promotional jingle at a bank in Arizona. A case of mistaken identity has them getting arrested and sentenced to 125 years in prison for armed robbery. They eventually make friends with a motley assortment of inmates and plan a daring escape during a prison rodeo.

One of my favorite bits has Wilder and Pryor taking turns acting crazy as they are led to their prison cell. Poitier gives them free reign to bring the silliness and they don't disappoint. Their comic timing and inspired lunacy have to be seen to be appreciated but they play off each other flawlessly.

Skip and Harry make three good friends on the inside. A bank robber named Jesus (Suárez), a gay man named Rory (Brown) who's serving time for killing his stepfather, and a huge mountain of a man called Grossberger (Van Lidth). Here's how Rory describes Grossberger to Harry and Skip, “That's Grossberger. The biggest mass murderer in the history of the southwest. He killed his entire family and all of his relatives in one weekend and then he killed some more people that reminded him of his family.”

Georg Stanford Brown plays Rory as a stereotypical mincing queen. However, this is an early example of an openly gay character playing an important role in a mainstream comedy. In that sense it was groundbreaking. Brown was even nominated for a Razzie Award as Worst Supporting Actress! The gay humor never gets mean-spirited or offensive though. Rory is treated the same as the other characters.

The most inspired moment from a directing standpoint is a scene that takes place in Skip's and Harry's prison cell. It includes their three new friends who have gathered together to plan their escape. Skip (Wilder) begins singing a lonesome cowpoke tune while the camera pans through the bars of the cell. Then, unexpectedly, Grossberger begins singing a tender ballad, his voice a sweet tenor. It's an unexpected moment of bliss in the middle of this incredibly silly movie.

Stir Crazy includes gratuitous nudity and plenty of crude humor. And where else can you see Gene Wilder ride a mechanical bull with such gleeful abandon? Together he and Richard Pryor belong in the pantheon of great comedy teams and Stir Crazy is their finest hour together. 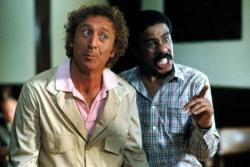 Like Patrick, I remember watching and loving this movie on HBO in the early 1980s. Also like him, I hadn't seen it in decades. Unfortunately, like too many things from our childhood, it didn't live up to my memory of it, despite still containing some very funny moments.

Pryor and Wilder are definitely the best thing about it. For the first hour they manage to raise the film above the material. The final third of the plot though, sees a sudden and precipitous drop in the comedy as it focuses on the prison break. Patrick mentioned the scene in the cell where Grossberger begins singing and it's this scene that really marks the change in tone. Before this it's a spoof of prison movies, but from this point on it becomes a prison movie and not even a very well done one. The scenes of the escape and the rodeo drag on for too long. Poitier and the script try to create suspense, but because of how lighthearted and silly it was for the first two-thirds, it's impossible to ever really feel worried or tense about the fate of these characters.

Both Pryor and Wilder get a chance to be funny, but Wilder, with the showier role, is the funnier of the two. His eternal optimism and innocence makes the movie. No matter how bad the situation, he almost always manages to stay positive. And the few moments when he breaks down are funnier because of his normal sunny disposition. Not that Pryor doesn't provide many of his own laughs, but he is much more restrained than Wilder. This laid back Pryor and exuberant Wilder is a potent combination and they play off of each other perfectly, with the scene where they are sentenced to prison as a perfect example. Their stunned reactions are priceless and they speak over and around each other in perfect comedy synchronization.

Off camera things weren't quite so funny. This was shot during the time of Pryor's greatest drug use and he was freebasing cocaine while not filming, causing him to show up late to set and to behave erratically while there. There are different accounts as to what actually happened, but an incident with a crew member, a watermelon and Pryor, lead to Pryor walking off the film for a short time. His agent managed to negotiate a half million dollar raise that brought him back on set.

Patrick mentioned Silver Streak, the first pairing of Pryor and Wilder. To me, that is their finest hour together. Pryor has a much smaller part, and Stir Crazy has a few specific scenes that are funnier than anything in that earlier film, but as a whole, Silver Streak is superior to this one. 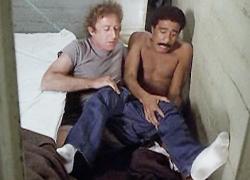 My opinion of Stir Crazy is very close to Scott’s. Pryor and Wilder are the best things about it and I too noted the drop in joke quotient for the last third of the movie. Their escape from prison via the rodeo should have been shortened greatly. However, up to that point I was laughing constantly.

Patrick was struck by the presence of a gay character while I was struck by the fact that it showed a friendship between a Caucasian and an African American. At the time, my best friend was a black guy and we talked about this film quite a bit after we saw it. We did not often see such a friendship on film and we liked seeing our friendship so represented. I distinctly recall my friend imitating Pryor, “Give em some of these. Yea, that's right! That's right! We bad!”

What I did not remember was just how much more Wilder was in the film than Pryor. Skip is naïve while Harry thinks of himself as street smart. Harry calling, “Skip” in an effort to save him from talking to some red necks or prison thugs is often what Pryor’s role was reduced to. My favorite moment of Pryor’s is when Grossberger is put into his cell and Pryor is scared speechless, mumbling incoherently for Skip to save him.

Wilder meanwhile, is the focus of the entire film. Skip initiates the trip to California and nearly everything else that happens. When the warden witnesses Skip riding the mechanical bull, Skip becomes the center of attention. We have scenes of him being “tortured” and enjoying it. There are also scenes of Skip flirting with his lawyer’s assistant that should have featured Pryor, as they represent both men. Perhaps the issues Scott mentioned had an effect on how much screen time Pryor ended up with.

Where this movie works is in the relationship between Skip and Harry. Skip never quite seems to grasp their situation while Harry understands it all too well. When first locked up, Skip decides to take notes for a future novel. With pencil and paper in hand, he says to Harry, “This filthy, roach-ridden reality is inspiring... what did that second policeman say to you when he grabbed you by the throat?” Harry snaps back, “You don't get it do you, Skip. You think this is The Count of Monte Cristo or something. We're in deep trouble. This is the real deal. We're in deep shit.” When sharing a toilet for a morning urination, Wilder scolds Pryor, “You’re peeing on me!” When getting dressed they accidentally put on the same pants. (see photo)

The movie missteps when they are not on the screen together. This is most noticeable during the rodeo scenes. Too much time is wasted on the goings on in the arena as well as behind it with the escaping prisoners. When you have as great a comedy team as Richard Pryor and Gene Wilder they should never be apart. 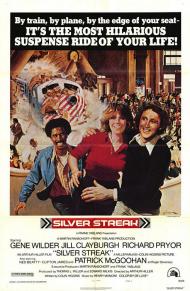