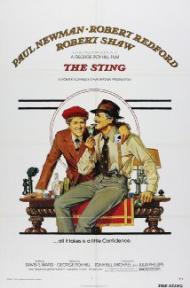 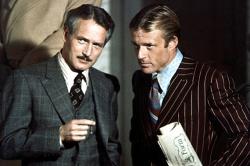 Paul Newman and Robert Redford in The Sting.

After the success of 1969's Butch Cassidy and the Sundance Kid, directed by George Roy Hill and starring Paul Newman and Robert Redford, a follow-up film reuniting the trio seems almost inevitable, and yet The Sting, the film that brought them back together, was never originally intended to do so. Writer David S. Ward wrote the script with Redford in mind, but the writer wanted to direct it himself. Redford, however, was nervous about starring in such a big film with a novice director and agreed to star only on the condition that an experienced director take the helm. That brought Hill onto the project who happened to show the script to Newman, but the part of Gondorff was a small one, written for an older, rougher man and it was only after some back and forth and some rewriting that Newman signed on as well. The only question was could the trio recapture the magic that made Butch and Sundance such a hit? Turns out they could as audiences and critics alike ate up this story of con artists in the 1930s set to the ragtime soundtrack of Scott Joplin. The Sting became the second highest grossing movie of the year (behind only The Exorcist) and was nominated for 10 Academy Awards, winning 7, including Best Picture and Director.

Even with the rewrites and the expansion of the Gondorff character, this is Redford's film rather than a true partnership. Both stars' names appear above the title, but Newman's part really is a supporting one. Redford plays Johnny Hooker, a young con artist (Redford was 37, but is treated as though he's younger) whose partner is murdered after it turns out the mark on whom they've worked a con was actually a runner for the mob. Hooker goes on the lam himself, taking refuge with Henry Gondorff (Newman), an experienced con artist. Hooker persuades Gondorff to help him get revenge on Doyle Lonnegan (Robert Shaw), the mob boss who ordered the hit on Johnny's partner. Their con is fairly elaborate, although simple at its heart. It involves a cast of colorful characters and has a few twists inside its turns that makes it seem more complicated than it really is. Trying to stay one step ahead of the cons is part of the fun of watching.

Redford garnered his only acting Oscar nomination to date for his portrayal of Johnny. He's good in the part, but it doesn't really feel like an Oscar worthy performance. It's a little light for that. He was certainly in good company that year. What other year can brag this list of Best Actor nominees? Jack Lemmon (who won), Marlon Brando, Jack Nicholson, Al Pacino, and Robert Redford. Against that sort of competition, Redford didn't really stand a chance. Not that he isn't good in the part. As he proved in The Great Gatsby and The Way We Were, period costumes suited him, particularly those of the first half of the 20th century.

Although once again Redford and Newman shared their magic chemistry, their screentime together is quite limited. Newman is absent for much of the third act. Robert Shaw as the villain Lonnegan has more screentime than Newman and is terrific in his part. He has to play the dupe, but he manages it without seeming stupid and remains believably menacing throughout.

Director Hill was reportedly inspired by the gangster films of the 1930s and he works in many old fashioned elements into his direction. The colors are muted and the edits are done through wipes and closing irises. The stages of the con are separated by title cards done in the style of "The Saturday Evening Post" from the era. The ragtime music by Scott Joplin, arranged by Marvin Hamlisch, is anachronistic. It was popular decades before the 1930s, but it suits the story and is instantly memorable, particularly the jaunty "The Entertainer", which became a top ten hit more than 70 years after Joplin wrote it.

Also helping to evoke the era are the costumes of legendary designer, Edith Head. Born in 1897, Head probably designed the suits from memory. She won her 8th and final Oscar for her work on this film. While accepting her award she said, "Just imagine, dressing the two handsomest men in the world and then getting this."

Although not an outright comedy, the tone of the film is very light, which makes it something of an anomaly for a Best Picture winner, since the Academy usually rewards more serious fare. It's this lightness of tone though that is the secret of the film's success. By keeping things light and jaunty, despite a couple of darker moments, the story breezes by. It's a fun watch, which isn't something you can usually say about Best Picture winners.

After proving for a second time how good they were together, it's surprising that Redford and Newman never worked together again. This is especially odd when you consider that the two remained friends for the rest of their lives. As recently as this year, in Captain America: The Winter Soldier, their limited partnership was referenced when Redford's character opens his refrigerator to reveal to sharp-eyed viewers that it is stocked with Newman's Own products, complete with Paul Newman's grinning face on them. It's a testimony to their chemistry that despite just appearing together twice, that they will forever be linked in our collective memory.

Robert Shaw, Robert Redford and Paul Newman in The Sting.

I've always preferred The Sting to Butch Cassidy and the Sundance Kid. Both are Hollywood-ized versions of their respective settings and both feature anachronistic, Oscar winning theme songs but if you think about it, Butch Cassidy is really famous for just a couple of scenes. Granted Newman and Redford are perfect together in it, and that movie is much more of a buddy picture than this one, but The Sting has a more cohesive storyline and is a better all around movie.

The Sting looks and sounds like an early version of a movie based on a graphic novel. In particular the way Depression era Chicago is romanticized visually. The way the characters talk is straight out of the comics too. Characters are forever saying things like, “Wise up.” and “Don't be a sap.” Also like a graphic novel there is very little character development. Everyone in the picture is a familiar stereotype, but they're very well done stereotypes.

As Scott said, the central con takes an elaborate setup with a large cast of colorful grifters to pull off but it's essentially a very simple con. I agree that the script does a good job of stringing Doyle believably along. It walks a fine line between not making him too dumb but making sure he falls for the con, while keeping him menacing right up till the climactic scene.

Usually in movies it's the male and female leads who “Meet Cute”. Here it's the two impossibly handsome male stars. Redford finds Newman passed out drunk on the floor of his room. He deposits him in the bathtub and runs water on him to sober him up. The first words they speak to each other are... Newman: Glad to meet you, kid. You're a real horse's ass. Redford: Luther said I could learn something from you. I already know how to drink.

Redford really does dominate the picture. He spends a lot of time in motion as he's constantly on the run from danger, sometimes he's caught and sometimes he manages to stay a few steps ahead of the various characters trailing him. He successfully plays younger than he was, and has anyone ever looked better in a pinstriped suit?

By far Newman's best scene is the poker game aboard the train. He plays the obnoxious boor to perfection. He enters the car acting drunk and saying, “Sorry I'm late. I was taking a crap.” He then proceeds to out cheat these cheaters while doing everything he can to piss Doyle off, including purposely mispronouncing his last name. Newman relishes the moment and quite frankly he was more deserving of a Supporting Oscar nomination for this scene alone than Redford was for the Best Actor nomination. Redford's fine in the part but Johnny Hooker is hardly a stretch.

The supporting cast helps sell the story and it's fun watching Doyle Lonnegan being taken for such an expensive ride, but it's really the Scott Joplin rags, the costumes and set design, and of course the incredible charisma and chemistry of Robert Redford and Paul Newman that makes The Sting great. It's truly a shame they didn't make more films together. 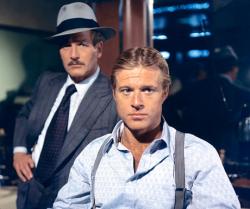 Paul Newman and Robert Redford in The Sting

The first thing I must comment on is Scott Joplin’s music. As Scott (my brother) noted, ragtime’s popularity waned some twenty years before this film even takes place. A scene where Charles Durning chases Robert Redford is accompanied by a ragtime piece, making light of it and eliminating all tension from the moment. Ragtime is more suited to a silent comedy short than a 1930s gangster film. Every time a piece plays I expected Harold Lloyd to walk around a corner. "The Entertainer" is extremely catchy due to its peppy repetitiveness but the ragtime soundtrack was more of a distraction for me than a compliment to the movie.

Hill seemed to seriously get his decades mixed up. The use of title cards and closing irises were also staples of silent films, not so much of the movies from the 1930s. I get that he was going for a look and feel from a time gone by but he hardly got it right.

It took me a while to get the feel of this film. Who am I intended to root for, the grifters or the gangsters? Everyone on screen is breaking the law. No one is any more deserving than anyone else. If not for the sheer charisma of the two lead actors, I never would have cared at all about the outcome. The star wattage of Redford and Newman is phenomenal.

Newman had a casual charm that was at once easy going and entirely undeniable. As the veteran of the two, this was practically the halfway point of his career. In his early films he had a cock sure youthful charm. Look at how his swagger and piercing blue eyes seduced Joanne Woodward in The Long Hot Summer (1958). In his later movies he was the confident, commanding mentor. He was easily believable as an army general, bossing soldiers and scientists around in Fat Man and Little Boy (1989). No matter what his age or role, Newman always had an air of likability and you always felt that he was somehow approachable.

As for Robert Redford, he was at the very height of his career in 1973. Although he received an Oscar nomination for his work here, I agree with my brothers that it is not an obvious Oscar worthy performance. I wonder how much his nomination was influenced by his acting in The Way We Were, which came out earlier that year. All he has to do here is play charming while in The Way We Were he had to play a greater amount of emotional range.

Although I never became, in the least, emotionally invested in this movie, I completely enjoyed spending time with Newman and Redford. Watching them work everyone around them and getting those people to see what they want to see is the perfect example of their abilities. As I watched this, I felt like a mark, much as Doyle was in the film. These two mega stars were able to pull me in and entertain me even though this film has no depth or any character worth caring about. Talk about a sting. 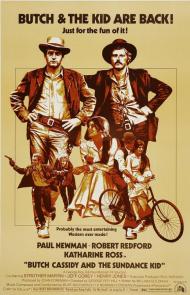